Winter Scene in the Country 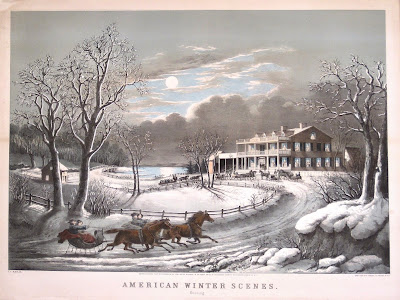 When one thinks of a Victorian holiday scene, and certainly that is the paradigm image many of us have, it is usually the great Currier & Ives winter prints that come to mind. With their cheerful winter scenes with snug homes, horse drawn sleighs and children playing, these iconographic images bring a smile to our faces, warm our hearts, and allow us to "remember" the "good old days of yore."

Currier & Ives were, however, only one of the popular print publishers in the nineteenth century producing charming winter scenes. One of their competitors, from my city of Philadelphia, was Joseph Hoover, whose business went on to achieve considerable success late in the century with their colorful chromolithographs (cf. forthcoming blog). At the beginning of his career, however, Hoover produced hand colored lithographs in the same ilk as those by his more famous competitors from New York City. 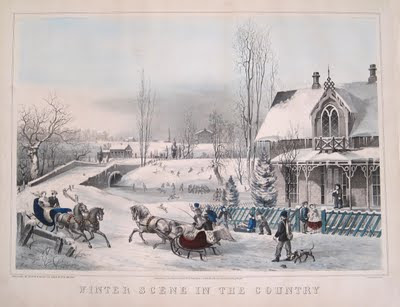 One of my favorite prints that brings with it all the wonderful feelings of the holiday is Hoover's print "Winter Scene in the Country" from 1868. Hoover did not have the same quality of artists as those who worked for Currier & Ives (such as George Durrie and Fanny Palmer), so his prints tend to be a bit more primitively drawn. This, in my mind, actually gives them a folksy charm, and certainly this print has all the elements we want in a holiday scene.

A wonderful ginger-bread Victorian house is set into a winter landscape near a pond upon which children and couples skate. Other children frolic and sled on the hill in the background, while boys and girls from the house in the foreground rush off to join their friends. Two horse-drawn sleighs are passing by and a huntsman and his dog return from a successful hunt.

While the drawing is not as fine as those on most Currier & Ives winter scenes, the quality of the lithography is first-rate. This is because this print was made by P.S. Duval and Son, one of the best lithographic firms in the country. Peter S. Duval was one of the first trained lithographers in the America, being brought over to Philadelphia from France in 1831 by Cephas G. Childs, a Philadelphia printmaker interested in expanding into the then relatively new print medium of lithography. Duval took over the Childs firm in 1834, bringing his son Stephen in as a partner in 1857. 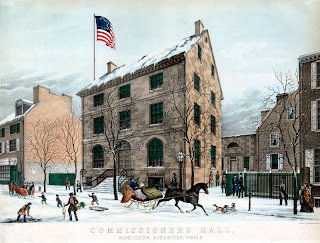 Duval produced many of the finest American lithographs of the nineteenth century, including many of the wonderful Indian portraits from the McKenney & Hall History of the Indian Tribes of North America as well as beautiful views like the scene of Philadelphia above. The delicate line and subtle color of the Hoover "Winter Scene" make it a very nice, though unusual, example of his work.

Currier & Ives are famous not only because they produced some of the finest popular images of the nineteenth century, but also because their output, both in terms of different images and number of impressions of each, was so huge. Great Currier & Ives prints, though expensive, do come on the market with some regularity. Joseph Hoover, in contrast, was not nearly as successful and early prints by his firm are quite rare. Despite this scarcity, they sell for considerably less than similar images by Currier & Ives, so not only are these wonderful examples of Victorian popular art, they are also relatively affordable if you can find them.
Posted by Chris Lane at 8:00 AM