I am reading a wonderful novel, Jonathan Strange & Mr. Norrell, written by Susanna Clarke. It is a tale of history and magic set at the beginning of the nineteenth century in England. The book has a delightful Dickensian descriptive turn combined with a fantasy element similar to that of the Harry Potter series. The reason I am writing about this book in this blog is that in a number of places Ms. Clarke uses prints and printsellers in a very appropriate manner.

For instance, in describing one of the main characters of the book she writes:

Nothing was more characteristic of Sir Walter Pole than Surprize. His eyes grew large, his eyebrows rose half an inch upon his face and he leant suddenly backwards and altogether he resembled nothing so much as a figure in the engravings of Mr. Rowlandson and Mr. Gillray.

This reference is the work of two important British caricaturists of the period, Thomas Rowlandson and James Gillray. 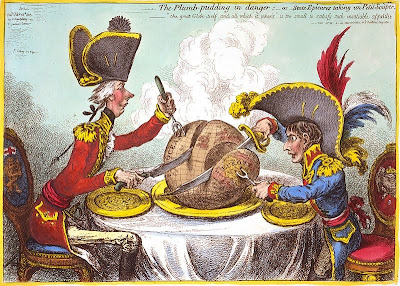 James Gillray (1757-1815) was a master caricaturist who began his career as an engraver. Gillray issued hundreds of social and political caricatures, including numerous biting images of George III and Napoleon. His artistic skill, wit and understanding of human nature make his images as delightful, pointed and scandalous today as they were when issued. His influence, both socially and politically, was substantial. The late eighteenth and early nineteenth century was a time of considerable political discord and mutual hate between the opposing parties (remind you of today at all?), and Gillray's caricatures fit into this environment perfectly. 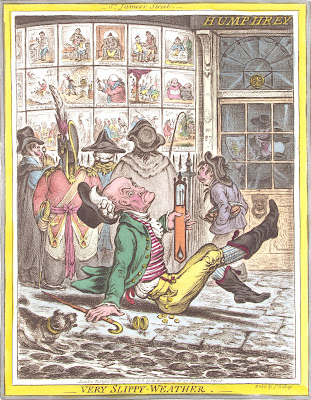 Most of Gillray's prints were published and sold by Miss Hannah Humphrey from her print shop (illustrated in the Gillray image above). Their relationship went well beyond business, for they lived together for many years and supposedly were once on the way to the church to get married when Gillray stopped and said, "This is a foolish affair, methinks, Miss Humphrey. We live very comfortably together; we had better let well alone." 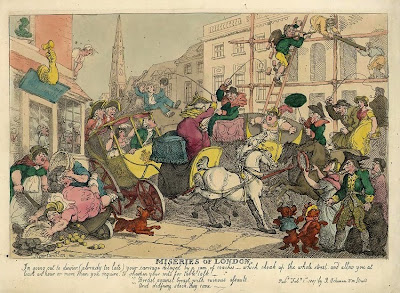 Gillray's contemporary, Thomas Rowlandson (1756-1827), was also a brilliant caricaturist, but with a more gentle soul. He trained at the Royal Academy Schools and in Paris, but upon receiving a substantial legacy he plunged into the decadent life common of the wealthy British "gentleman." Meanwhile he turned himself into an expert caricaturist, lampooning the excesses of society in which he now endulged. His sharp eye, comic renderings, and delicate use of color soon established him as one of the important English artists of his period.

The prints of both of these artists were well known by the social elite in England during the period of Jonathan Strange & Mr. Norrell, so it is very appropriate that Ms. Clarke used their work to help describe Sir Pole. 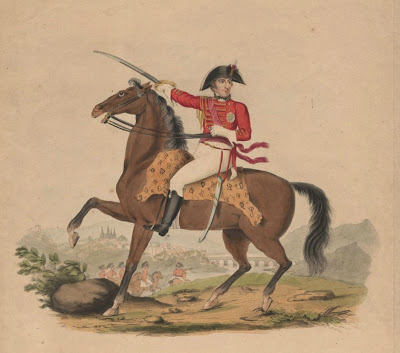 Besides caricatures, portraits of famous individuals were very popular. Before the day of illustrated newspapers and photography, engraved portraits were the only way that the general public could learn what the royalty, politicians, and heroes of the era looked like. Ms. Clarke notes this in a passage about Lord Wellington,

How to describe Lord Wellington? How can such a thing be necessary or even possible? His face is everywhere one looks--a cheap print upon the wall of the coaching inn---a muich more elaborate one, embellished with flags and drums at the top of the Assembly-room staircase. Nowadays no young lady of average romantic feeling will reach the age of seventeen without purchasing at least one picture of him.

It was not only through caricatures and portraits, however, that prints had an impact on this period, for with the rise of an educated elite with both money and leisure time, prints were becoming very much part of British society. Prints not only lampooned social and political figures, but also were a means for those in society to become aware of current tastes in fashion and design.

This is nicely demonstrated in this book (Ms. Clarke obviously understood the importance of prints at the time), with a description of how Mr. Drawlight instructed Nr. Morrell, who was just moving into London society, on how to decorate his new house. 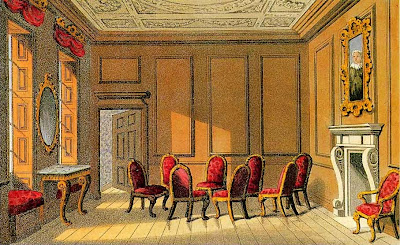 Mr. Drawlight ordered Mr. Norrell's carriage to be got ready and directed Davey to take him and Mr. Norrell straight to Mr. Ackermann's shop [Rudolph Ackermann's print shop] in the Strand. There Mr. Drawlight shewed Mr. Norrell a book which contained a picture [an aquatint] by Mr. Repton of an empty, old-fashioned parlour...But on the next page, ah! what changes had been wrought by the noble arts of joinery, paper-hanging and upholstery. Here was a picture of the same parlour, new-furnished and improved beyond all recognition!" 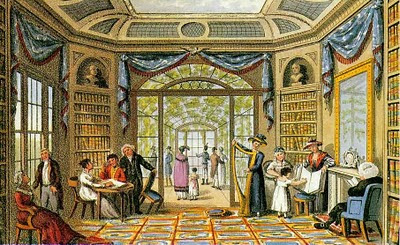 This quote introduces another very important figure in British prints of this period, Rudolph Ackermann, and soon I'll post a blog on this printseller and publisher.
Posted by Chris Lane at 8:00 AM