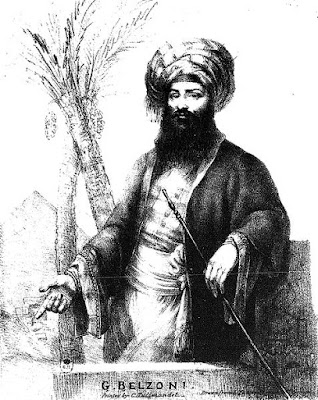 Giovanni Belzoni (1778-1823) was a nearly six foot, seven inch, red-headed Italian whose fascinating life led him to become known as “The Great Belzoni.” As a young man in Rome, studying hydraulics and intending to join a monastic order, Belzoni was driven from the city when it was captured by Napoleon in 1798, moving to the Netherlands where he worked as a barber. 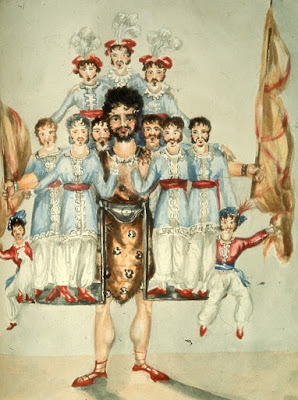 In 1803 he moved to England (supposedly to avoid being thrown into prison), where he became a circus strongman called the “Patagonian Samson.” Part of his act was to carry a dozen men around the stage on a metal frame. 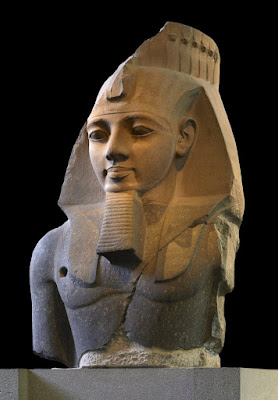 In 1816, Belzoni traveled to Cairo in order to interest Mohammed Ali Pasha in a hydraulic lifting device that he had invented. This venture proved unsuccessful, but Belzoni became fascinated by Egypt. He turned to the British Consul, Henry Salt —-who had known him during his time as a strongman—- for possible employment. Salt, who was facing the problem of getting the head and shoulders of the colossal statue of Ramses II (called the “Younger Memmon”) from Thebes to England, hired Belzoni for this job. 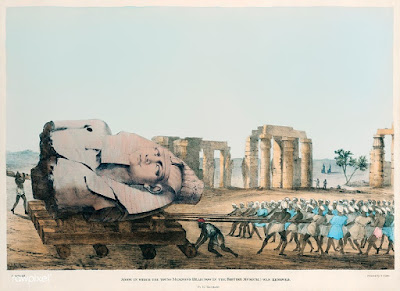 Belzoni was able to complete this task with ingenuity and perseverance. The head weighs over 7 tons and it took Belzoni 17 days and over 100 men to tow it on a wooden sled to the Nile. (The statue is now in the British Museum). 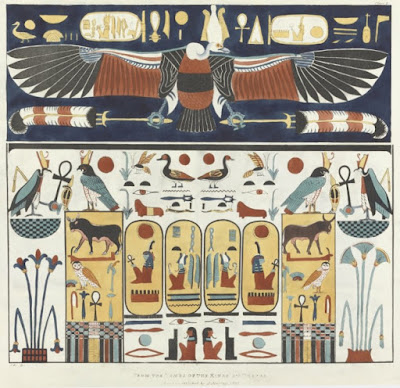 Belzoni continued his “collecting” of Egyptian artifacts and explored many of the important sites in the country. In 1817, he became the first to perform large scale excavations in the Valley of the Kings, discovering a number of tombs, including those of Amenhotep III, Ramses I, and Seti I, the latter often called “Belzoni’s tomb” in honor of his discovery. 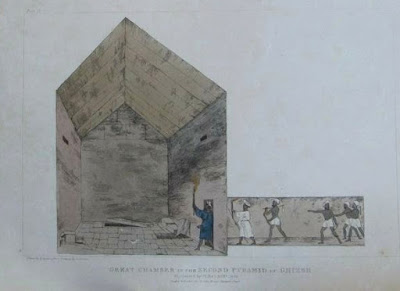 He was the first person since ancient times to enter the innermost part of the great pyramid of Khafre at Giza, though at one point he became wedged in a narrow passage, having to be extricated by his helpers. 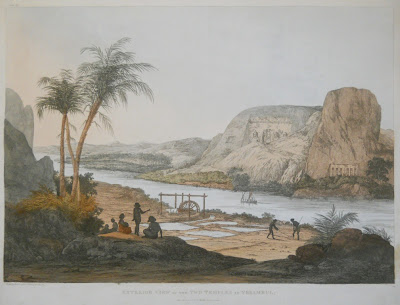 Belzoni also was the first to excavate the great temples at Abu Simbel, which were buried under 30 feet of sand. 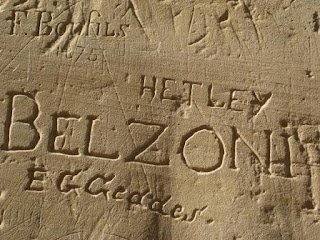 Belzoni made many enemies and stole many artifacts from Egypt (though he was only one of many Europeans doing the same thing). He also did some cringe-worthy things, such as smashing through a wall with sledge hammers, sitting on mummies so they were crushed underneath his weight, and carving his name on ancient monuments. Still, Belzoni’s enthusiasm and energy allowed him to “achieve” much. He approached his explorations with enthusiasm, mounting excavations on a massive scale, and he was highly systematic in his approach. He destroyed much, but was instrumental in awakening Europe to the glories of ancient Egypt. 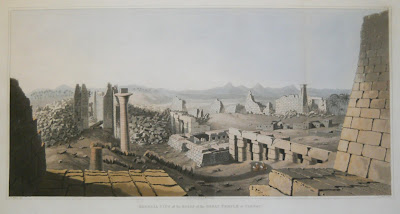 After returning to England in 1820, Belzoni published his famous Narrative, a work that excited huge interest. In 1822, the atlas of prints to accompany this work was issued, containing many detailed scenes of sites in Egypt 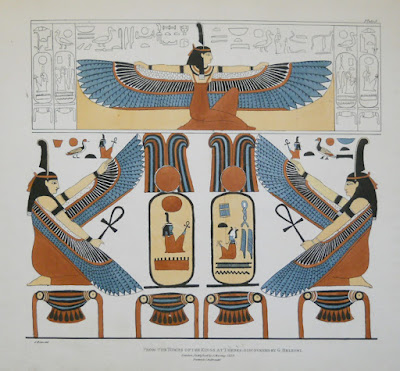 and brilliant renderings of the tomb paintings that Belzoni discovered. Such was the impact of Belzoni’s publicizing of his discoveries that this can be seen as the beginning of the popular fascination with Egypt.

After Egypt, Belzoni continued his explorations in Africa, heading an expedition to Timbuktu in 1823. He caught dysentery there and died at the end of that year.

Posted by Chris Lane at 5:22 PM No comments:

Drop in prices of antiques since 2000 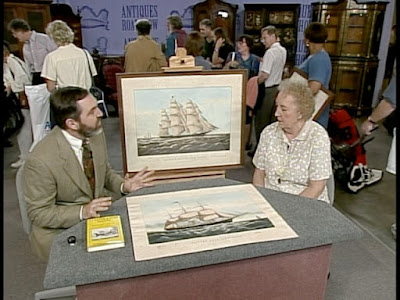 A number of months ago, Antiques Roadshow broadcast one of their "vintage" shows, this one showing appraisals from Birmingham in 1999. That was from only the third year of the show, the second year in which I appeared as a print and map appraiser. Watching it, the first thing that I noticed was how young everyone looked. A fair number of the appraisers who appeared in this episode are still appraising for ARS and everyone looked so much younger (of course, I haven't aged a bit...)

This reflects the fact that, as a general rule, antiques have gone down in value since the turn of the millennium. Part of that is because in the last decade of the twentieth century, prices for antiques were quite strong. Antique shows were going strong, decorators were keen on using antiques in homes and even offices, and there were lots of established and new collectors seeking out the best antiques of all sorts.

In general, it was for the "top end" antiques that prices were steadily going up, the "low end" rising a bit, but really not that much. The advent of Antiques Roadshow reflected the popularity of antiques at the time and also helped to sustain the rise in interest and prices. Of course, in general the appraisals which were shown on ARS were for "top end" items, so combining that with high prices of the time means that the appraisals reflected the booming antiques market.

Then, of course, along came 2008 and the great economic crash. Many parts of the American economy were hurt by this, including antiques. In most cases, the purchase of an antique is a luxury or discretionary purchase, and this was the type of purchase that was most hurt after 2008. Auction and retail sales in antiques slowed dramatically. Auction prices dropped quickly, but this did not lead to an immediate drop in retail prices. Many dealers tried to hang on to the "old" pricing structure, though they were certainly much more amenable to giving a discount. Over time, however, it did definitely lead to a lowering of many prices in the antiques world. I would say that by about 2010-12, a pricing structure for antiques had become pretty standard.

In the last few years, in some areas of the antiques market, there has been some rise in prices, though we certainly have not reached the hey-day of 1999. People are much more likely to spend their discretionary dollars on things like antiques, so we have come out of the really dark days of 2008-2010. The market, though, is quite different. Few prices are reaching new heights, and some areas of antiques which used to be "hot" are no longer so. 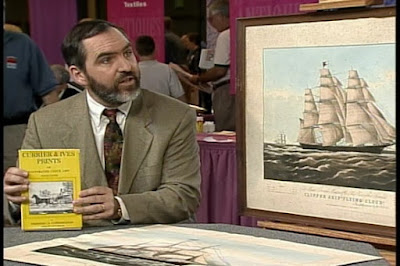 I think probably the biggest reason for that is the lack of serious collectors. Back when the Birmingham appraisals were filmed, there were lots of collectors--some long-term, some new collectors--seeking out the best items in many areas of antiques. In my field, collectors of the best natural history prints, prints of Native Americans, Currier & Ives lithographs, and maps were steadily driving prices to new heights. The economic disaster of 2008 knocked most of these collectors out of the market, and frankly, few have come back in even a decade later.

Why is that? I suspect that some of it was that the most of the long-term collectors were not that young, and after they stopped collecting in 2008, they just never had the enthusiasm to restart. It is one thing to gear up for collecting when one is 30 or 40, but another thing when one is 60-70. Adding to the problem is the fact that there just are not that many young collectors entering the market. Whether that is a product of changing interior design styles, a lack of appreciation of "things," or just lack of education about antiques, everyone in the antiques world will tell you that there are not many millennials or other young people purchasing antiques.

Do I think prices will come back? I think eventually for the best of all types of antiques. Antiques are wonderful artifacts of our past which still can play a relevant role in our lives, even if just as furniture, decoration or whatever. If one looks at the prices for a really well-made antique compared to a mass produced modern equivalent, the antiques are often better value just as objects. When one factors in their history and scarcity, they have a huge appeal. Markets do tend to go up and down and I think the antiques market will go back up. How soon, I wish I knew. The continued popularity of Antiques Roadshow, however, is a hopeful sign.