Return of the Currier & Ives Buffalo 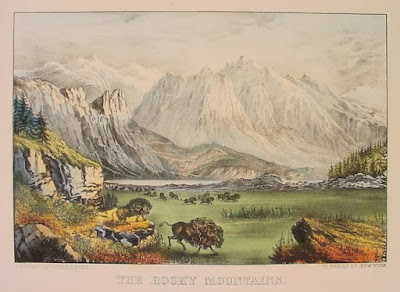 A few years ago, we posted a blog about how we had discovered the source of some very strange buffalo which appeared in the classic Currier & Ives print, "The Rocky Mountains." Well I just realized that the same buffalo turned up again! 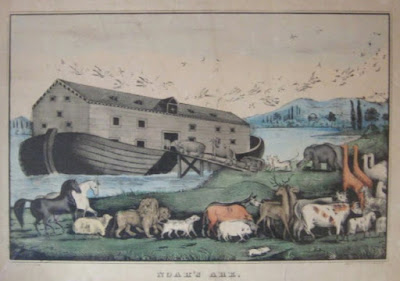 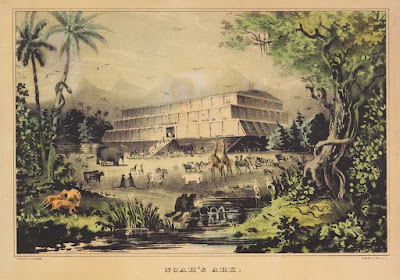 Conningham lists five different versions of the subject of "Noah's Ark" done by Nathaniel Currier or Currier & Ives. Though all are undated, this was likely an early subject for Nathaniel and I would imagine the firm kept some of these prints in stock for most of their existence. 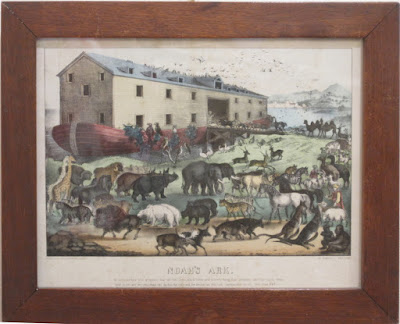 Sometime between 1874 and 1878 (based on the address of the firm), they issued what may have been their last version. 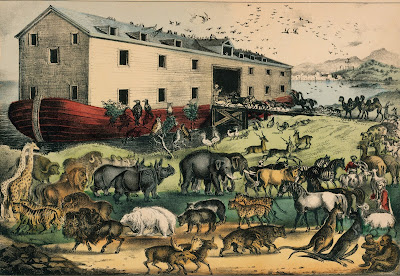 This had a wide variety of animals, 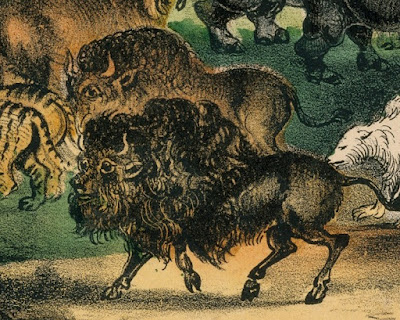 including some very strange looking buffaloes. 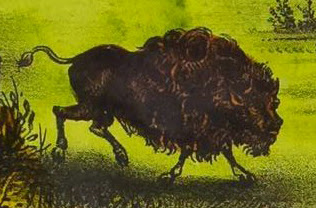 This is essentially the same image as appeared in "The Rocky Mountains," which as explained in the earlier blog was based on an illustration in a French natural history from about four decades earlier. This odd looking buffalo first appeared in the print from 1872-74 and obviously the firm like the image, so they reused in a couple years later for a new version of "Noah's Ark." I wonder if it was ever used again?

Posted by Chris Lane at 8:57 AM No comments: 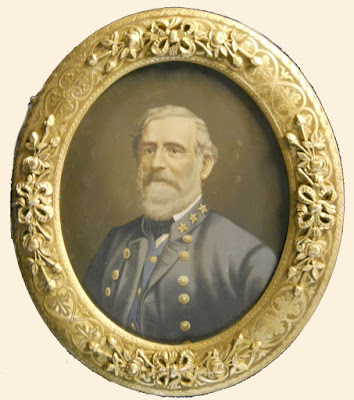 We have recently acquired a couple of important historical prints with a Confederate theme: a portrait of Robert E. Lee and an image of a Confederate encampment. Both of these are rare, significant images, the type of prints I have always been proud to handle. However, the recent controversy related to the statues of Confederate “heroes” has given me pause to consider just how pleased I should be to be selling such prints. 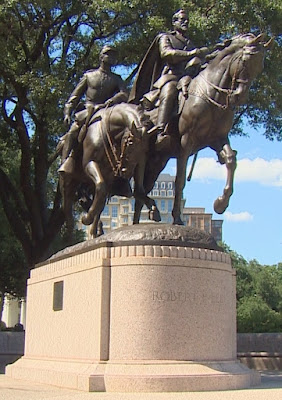 Personally, I believe that the statues of Confederate figures should be removed from general public display, where they are presented as glorifications of a cause essentially based on the preservation of slavery, and put into places where they would be presented instead as historic artifacts to be understood as part of our history. That is, where they will be objects which we can learn from rather than glory in.
So, how does this belief relate to my shop selling Confederate prints to the general public? After considerable thought, I believe that it is fine to sell the images, even though they do, in their own way, present aspects or individuals of the Confederacy in a positive light.

To decide this, I looked at what I consider to be the main arguments for removing the Confederate statues from prominent public display.

Most of these prints have their genesis in the notion of “The Lost Cause of the Confederacy.” This was a conception, which appeared soon after the war, based on a wishful reimagining of the history of the Civil War in order to vindicate the actions of the Confederacy and restore some sense of pride to Southerners. The “Lost Cause” model presented the Confederate cause as a heroic one, where overwhelming odds led to the defeat of a noble South. The war was presented as a struggle to maintain the Southern way of life, which was more Christian and civilized than the greedy Northern life-style.

Part of the “Lost Cause” idea was a denial of the significance and horror of slavery. Slavery was not supposed to be central to the Confederate cause, and it was often presented as a relatively benign institution. The prints issued as part of the “Lost Cause” idea were published not as a reaction against civil rights and equality of the races, but rather an avoidance of those issues totally in an attempt to reestablish a sense of pride in a culture which had suffered abject defeat. 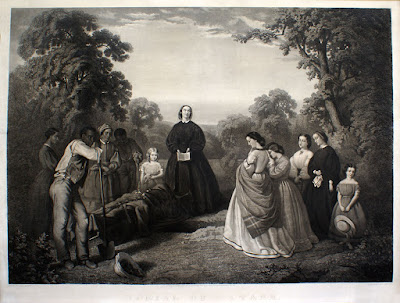 A great example of the “Lost Cause” concept is William D Washington’s image of the “Burial of Latane.” This painting, and the print based on it, show the burial of Captain William Latane, who was killed while on a raid with J.E.B. Stuart’s cavalry. In the image of Latane’s burial there is a stark absence of any men; the burial party is composed solely of women, children and “faithful” slaves, celebrating both the devotion of Southern women and their bond with the slaves. This print was issued in 1868 and would have hung in many Southern homes, allowing the population there to retain some sense of pride in their history and culture. 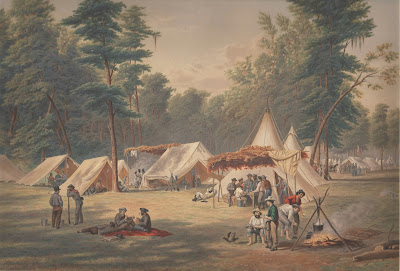 The print of the Confederate encampment by Conrad Wise Chapman had a similar role. Chapman, a sergeant in the Confederate army, made many sketches of his experiences in the war, including one upon which this print was based. It clearly expresses aspects of the “Lost Cause” concept, with the proud Southern soldiers going around with bare feet, while several blacks are shown happily at leisure, even while the soldiers cook or otherwise work, a highly unlikely state of affairs.
One can look at these prints not as glorifications of slavery and white supremacy, as are the statues, but rather as unfortunate attempts at Southern self-respect. The claim has been made that this is the case also for the statues, but that just is not true. A look at the history of their erection makes it clear that the original intent of the statues was to glorify the Confederacy and promote its defense of white supremacy. 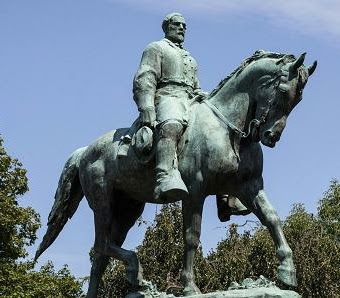 However, I do not think that the original intent is the essential difference between the statues and the prints. That, I think, lies instead in the way the present impact of the prints, compared to the present impact of the statues. I do not think that all, or even most, of the citizens in the communities where the statues now stand would endorse white supremacy, but given their history and their prominent locations, where they loom over public spaces, these statues silently yet expressively make a statement that can and is read by members of those communities as an endorsement of that abhorrent position.
The prints, in contrast, are almost exclusively used in a private or an academic setting, where the reasons for their display can be understood benignly, and where there is no similar deleterious public impact like that of the statues. Now I am sure that there were instances where Confederate images were put on display in a court house or other public location, where they were intended to have an impact similar to the statues. If such a situation exists today, for instance with a portrait of a proud General Lee hanging in a court house, I think that is a situation which does mirror that of the statutes and the portrait should be removed.

However, most of the uses of Confederate prints are in private homes, collections, or in museums and libraries, where they do not have a general public impact. If a Confederate statue is placed in a similar setting, for instance if someone has a statue of Lee in a private home, perhaps because an ancestor fought under the general, I would argue that there is nothing wrong with that. Indeed, I think having the statues on display in a historic setting, say in a museum, is important, for it would be a mistake to ignore our history, and it is important to understand our past in all its complexity.

I would like to say that owning Confederate images is ok as long as one’s intent is “pure,” that is, as long as one is not intending to promote the odious aims of the Confederacy, but instead where one is treating the images as artifacts, part of the multifaceted fabric of our history. However, it is an impossible and probably incoherent to try to judge the intent of a buyer (though if I knew that a potential buyer was intending to use a print to promote white supremacy I would not sell it to that person).