Advertisements, especially those from the nineteenth century, can provide some of the best and most interesting views of American sites. Designed to catch the eye, the images in advertisements are usually quite attractive and advertisers often wanted to show their store, factory, or city. In the exhibit of nineteenth-century printed views of Pittsburgh, Panorama of Pittsburgh which I curated in the summer of 2008, some of the most exciting images were advertisements and the Library Company of Philadelphia, in their project Philadelphia on Stone, features many of the incredible body of Philadelphia advertising prints from the period.

Most of these prints are separately-issued broadsides, intended to be put in a window or pasted to a wall. There is, however, a wonderful group of large Philadelphia advertisements which were issued in an unusual atlas by the Colton cartographic publishing firm of New York. Founded by Joseph Hutchins Colton in 1831, the firm began atlas publishing with a two volume General Atlas in 1855. A year later the firm issued a second edition in one volume. That same year, in 1856, they published the first volume as a separate Atlas of America. What is of particular interest, however, is that they also produced a special commercial edition entitled Colton's Atlas with Business Cards of the Prominent Houses in Philadelphia. Commercial Edition. 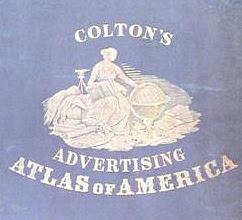 What made this version of the atlas special was that it included not only the maps, but also numerous advertisements for Philadelphia firms. Most of these were single page advertisements with wood engraved illustrations, though Colton offered the option of a business paying a premium to get a single page "business card," illustrated with lithography or chromolithography. A number of firms took advantage of this, and some of the larger Philadelphia businesses even purchased double-page, illustrated advertisements. 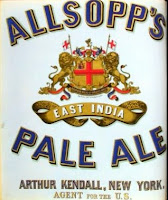 In the introduction to the atlas, the firm stated that this edition of the atlas was limited to one thousand copies, "and distributed gratuitously, for the interest of the advertisers therein, to leading Hotels and Steamers, throughout the country…" The atlas was successful enough that the Colton firm tried to do the same thing the following year, in 1857 producing Colton's Advertising Atlas of America. This edition had advertisements primarily from New York businesses. However, the response from New York businesses must have been lukewarm, for very few full page advertisements were included and the most elaborate print is for the New York agent of Allsop's Pale Ale, a print lithographed not in this country, but instead by Day & Son of London. 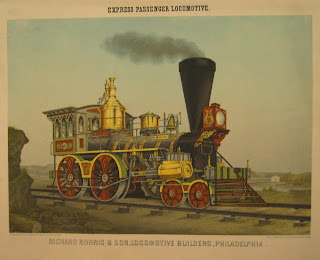 Back to the Philadelphia atlas, probably the most attractive image in the atlas is the print of a passenger locomotive engine by the Richard Norris & Son company. This is one of the best American train prints of the period, a chromolithograph by A. Brett of Philadelphia. 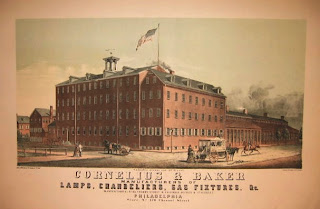 One firm, Cornelius & Baker, paid for two double-page advertisements. This business manufactured lamps, chandeliers, gas fixtures and the like, and they had two factories, just about two miles apart. They paid for an advertisement for each factory, chromolithographed by Philadelphia lithographers Wagner & McGuigan. Interestingly, these factories were connected by a private telegraph line, only the third such line in the country. 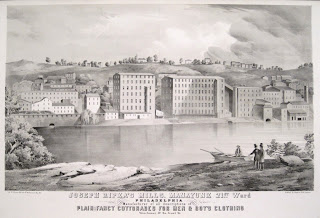 There are many other full page, and partial page advertisements in this atlas, but I'll mention only one more of special note. This is the print of Joseph Ripka's Mills in Manayunk, also lithographed by Wagner & McGuigan. Joseph Ripka, "Manufacturer of all descriptions of Plain & Fancy Cottanades For Men & Boy's Clothing," had set up his mills in Manayunk in 1831 and by the time of this print he was the largest cotton manufacturer in the United States. What makes this print of particular interest is that it is not only a wonderful advertising print, but also an excellent view of part of Philadelphia. Manayunk, now a popular residential and shopping section of Philadelphia, is shown with interesting detail and at the top of the ridge behind is shown the then small rural community of Roxborough.
Posted by Chris Lane at 8:00 AM