The Library Company of Philadelphia

In past blogs I have talked about some of the top collections of antique prints around the country but I have yet to discuss any of the superb Philadelphia institutions with print collections. Today I’ll look at one of these, The Library Company of Philadelphia. 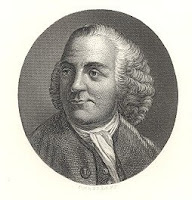 The Library Company is an independent research library which focuses on American society and culture. The Library Company is actually the oldest American cultural institution, founded as a lending library in 1731 by Benjamin Franklin. In the early days of the colony, books were difficult to find, so Franklin convinced 50 like-minded citizens to form the Library Company and pool their resources to create a library they could all use. The Library continued to grow over the years, serving as the original Library of Congress when Philadelphia was the nation’s capital. In the 1950s the Library Company was transformed into a research library, serving as a fabulous resource for researchers, students, or anyone who has need for what is one of America’s great libraries.

The collections encompass rare books (including those acquired in 1731), manuscripts, broadsides, works of art, ephemera, photographs, and of course prints. A separate Print & Photographs Department was formed in 1971 to manage and help provide access to the graphics holdings which encompass approximately 75,000 (!) prints, photographs, maps, and original drawings and watercolors. These focus especially on prints and photographs by Philadelphians and images which document the history of Philadelphia, though the Library Company also has a strong representation of historical prints, portraits and political cartoons documenting wider American history from the 18th through early 20th centuries. 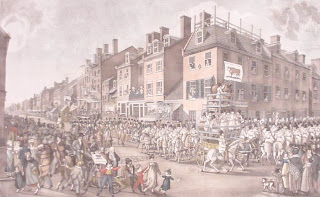 Philadelphia on Stone: The First Fifty Years of Commercial Lithography, 1828-1878

What really is exciting to me is a three-year research project which the Library Company has undertaken. Called Philadelphia on Stone, the project, under the direction of Erika Piola, aims to research, document and publish the history of Philadelphia lithographers, artists and printers and the work they produced between 1828 and 1878. Included in this project is a survey of Philadelphia institutional holdings of lithographic views of Philadelphia and the production of a digital catalog of about 800 views. The starting foundation of this survey is the “Wainwright collection.” 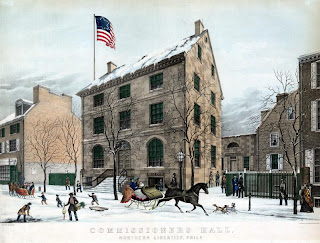 Nicholas B. Wainwright was a local scholar who collected and studied lithographed views of Philadelphia before 1866. In 1958 he published the seminal Philadelphia in the Romantic Age of Lithography

. This includes a history of early lithography in Philadelphia along with a descriptive list of 480 prints of Philadelphia. Many of the prints described were from the collections of the Library Company, which currently holds 285 of the prints in Wainwright’s work (all of which are available now for viewing online.) 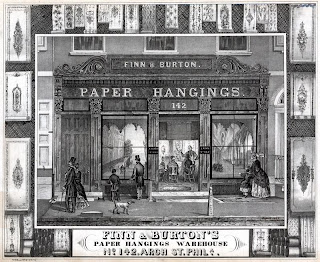 Besides this survey and catalog of Philadelphia views, the Philadelphia on Stone project will result in an exhibition at the Library Company from March to October 2010 and a number of related public programs. The project will also generate an illustrated biographical dictionary documenting over 500 individuals involved in commercial lithography and a heavily-illustrated scholarly book with thematic essays on 19th-century Philadelphia lithography. As someone who works daily with Philadelphia views and the work of Philadelphia lithographers, the Philadelphia on Stone project is very exciting and I eagerly look forward to the results. In the meantime, though, there is much material already online and, of course, one can always stop by and explore the Library Company’s holdings first-hand.
Posted by Chris Lane at 8:00 AM