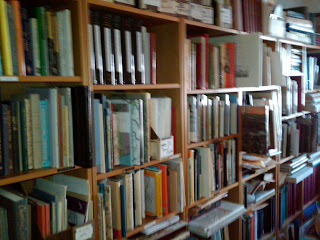 The number of print reference books available to collectors and scholars has grown considerably in the last decade or so. The largest increase in number of references related to prints has occured in the field of cartography. When we first went into business in 1982, there were a few basic, mostly general cartographic references, but now there are hundreds and hundreds of such references, with more coming out each year (the photo above is just about 1/5th of our map reference library).

There are still quite a number of good general references, but the real growth has been on subject specific books. Maps of the world, different regions, from different periods or cartographers, and so forth have all been studied and references printed on these topics. While not every topic a collector might focus on has its own reference work (for instance, I collect maps of Oxfordshire and there is no work on this particular topic), but most collectors will find some good references that to some extent focus on their area of interest (there are, for instance, a number of good books on British county maps).

The granddaddy of cartographic references is the series of volumes currently under production by the History of Cartography Project. This multivolume reference (currently three volumes have been issued) is planned to cover the entire history of cartography in great detail. This has and will continue to provide the baseline from which all other cartgraphic references will start.

In the latest issue of The Portolan, the journal of the Washington Map Society, Bert Johnson wrote up the results of a survey the society made of its members asking about cartographic references: which volumes they thought were most useful or special in some way. It is well worth reading the article, as it does highlight some of the best references both currently in print and out of print. Washington Map Society member Joel Kovarsky maintains a listing of what he considers to be the best cartographic reference books, which can be seen on his website. 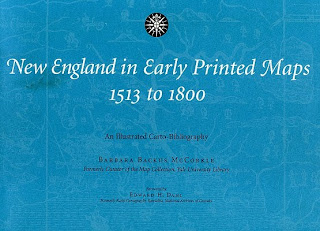 , an excellent tome detailing the maps of New England from this period, listing different states, giving sources and locations of copies, and including many illustrations. This is a prototype of what the best recent cartographic references are like.

It is not surprising that this work would be so good, as Barbara McCorkle has long provided a shining example of cartographic scholarship. For many years Barbara worked as a reference and map librarian at the University of Kansas, Purdue, and Yale, ending up as the Curator of the Map Collection at Yale between 1981 and 1993.

Barbara's excellent reference on maps of New England was issued after her retirement and she has kept busy since, working on a very long-term project of documenting the many maps issued in English and American geographies of the 18th century. There were a plethora of maps in such volumes and up to now one often found these maps separated from the books, without any way to find out where they came from. That problem has now been ameliorated, for Barbara's efforts have finally resulted in the publication of a Carto-Bibliography of the Maps in Eighteenth-Century British and American Geographies.

This bibliography is published by KU ScholarWorks (University of Kansas) and it is an 0n-line PDF file which can be viewed on-line at no charge. A work clearly of sustained dedication by Barbara, this cartobibliography contains descriptions of about 6,700 maps taken from 470 geographies! This is a tremendous addition to the cartographic reference universe, a universe that, luckily for us, is growing all the time.
Posted by Chris Lane at 8:00 AM