In the previous blog I talked about premium prints. I am not the only one interested in this topic, and in the Summer 2009 issue of the Newsletter of the American Historical Print Collectors Society, print scholar James S. Brust wrote an article on the same topic. Jim has for years done considerable research into different aspects of the history of Currier & Ives, and related prints. He has also done much research into the use of prints in CDVs, an unusual and interesting topic. The following article from the newsletter is an nice example of his fine work (with a few minor edits so it makes sense in this context...):

In a trend that seems to have peaked in the mid 1870s, publishers of various periodicals gave prints as premiums to subscribers. Those familiar with Currier & Ives have likely seen examples of this practice, but it was not just that firm’s work, or hand colored lithographs in general, that were used in this fashion. The full range of popularly priced prints was offered, including steel engravings and chromolithographs. This article will present some examples of C&I and other prints given as gifts to periodical subscribers. 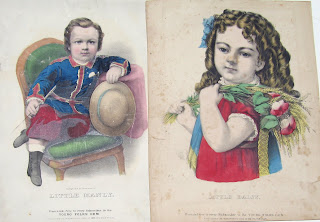 The image above shows two small folio Currier & Ives lithographs offered with subscriptions to The Young Folks Gem, a newspaper-format monthly published in Wadsworth, Ohio, by John Clarke. On the left is Little Manly (C-3664, G-3961), published by Currier & Ives in 1874. Printed below the title: “Presented free to every Subscriber to the YOUNG FOLKS GEM. Published at Wadsworth, Ohio, at 30 cts. per year.” On the right is Little Daisy (C-3604, G-3885). Though arranged differently, the Young Folks Gem wording below the title is the same, except the subscription price was only 25 cents per year. As the Young Folks Gem was first published in late 1872, and Little Daisy is undated, this second example likely predates the first. 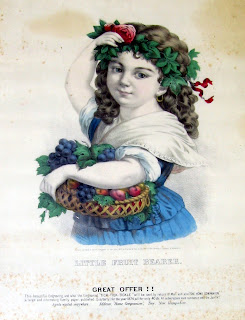 The image at right is another small folio Currier & Ives print, The Little Fruit Bearer (C-3631, G-3918), published in 1873. A more elaborate inscription, printed below the title reads: “GREAT OFFER!! This beautiful Engraving, and also the Engraving ‘TICK-TICK-TICKLE’ will be sent by return of Mail and also ‘THE HOME COMPANION’ (a large and interesting family paper, published Quarterly) for the year 1874, all for only 40 cts. All subscriptions must commence with the Jany. No. Agents wanted everywhere. Address, ‘Home Companion,’ Troy, New Hampshire.” Hiram C. Newton had commenced publication of the Home Companion in April 1872, and it would go on to be successful, issued at varying frequency through at least the mid 1880s. This premium offer came relatively early in the magazine’s run, when he would have been most anxious to attract subscribers. The forty cents asked would have been the retail price of the two Currier & Ives lithographs alone (they were, of course, not engravings as the inscription said). We can assume that as a bulk purchaser, Newton would have paid much less, likely six cents per print or possibly a little more to cover the cost of the additional printing below the title. But from the point of view of the retail customers, they were getting the Home Companion for “free,” a powerful incentive to subscribe to this new periodical. 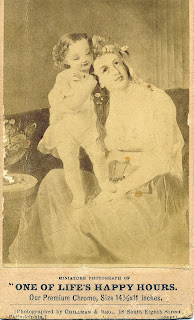 The figure on the left is a carte de visite (CDV) photograph of a print. On the card below the image are the words: “Miniature photograph of ‘ONE OF LIFE’S HAPPY HOURS.’ Our Premium Chromo, Size 14 ½ x 11inches.” Extensive wording on the reverse states: “A copy of the Chromo will be sent to every yearly subscriber to The Saturday Evening Post, THE GREAT LITERARY WEEKLY FOR HALF A CENTURY.” Tracing its roots to Benjamin Franklin’s Pennsylvania Gazette, first issued in 1728, the venerable Saturday Evening Post began publication under that name in 1821, and was well established by the time of this promotion in the 1870s. Unfortunately, we do not know who published this chromo, or what its stand-alone price would have been. And there was an additional ten cents charged for shipping the print to the subscriber. Still, the publisher’s of the Saturday Evening Post clearly felt that offering this print would widen their readership and enhance their business. 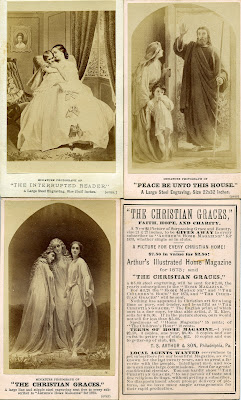 The group of images above shows three related CDVs of prints offered as premiums for Arthur’s Home Magazine, and a sample reverse typical of the group. Timothy Shay (T.S.) Arthur (1809-1885) was a well known American author and temperance advocate, most famous for his 1854 anti-drinking novel Ten Nights in a Bar-Room and What I Saw There. But he was also active in periodical publication, launching the monthly Arthur’s Home Magazine in 1852, a journal that would continue past his own death until very near the end of the 19th century.

On the top left of the grouping is a CDV of The Interrupted Reader, described as “a large steel engraving, size 21 x 27 inches.” Writing on the reverse offers this print, or another, similar-sized steel engraving for free with each $2.50 subscription to Arthur’s Illustrated Home Magazine for 1875. On the top right, a similar CDV shows an even larger steel engraving (22 x 32 inches) titled Peace Be Unto this House. The reverse of this CDV gives a little more information about the print itself: “This splendid picture, the English copy of which sells for $14, is sent free to every subscriber for 1874 to Arthur’s Illustrated Home Magazine.” It appears that Arthur’s was offering a less expensive, possibly American-made version of a British print. We gain a bit more information about these engravings from the third CDV, on the lower left of the grouping, titled The Christian Graces. Described as a “line and stipple steel engraving,” 21 x 27 inches, it was the premium print for 1873, given free with a $2.50 subscription. The reverse, illustrated lower right, states: “Nothing has appeared in Christian art for a long time so pure, and tender, and beautiful as ‘The Christian Graces.’ The English print, of which ours is a fine copy, by that able artist, J.R. Rice, sells for $15.00. If in the picture stores, ours would not sell for less than $5.00.” It is unclear whether Arthur’s commissioned these copies, or how much they paid for them, though likely it was more than the cost of a Currier & Ives print. Still, this successful publication found it worthwhile to give these large engravings to their subscribers.

This article is not meant to be comprehensive. I’ve presented just a few examples, and undoubtedly there were many other instances where prints were given as premiums. Taken together, they serve as evidence that these “popular” prints were indeed popular, and economical enough for the periodical publishers to give away in exchange for subscriptions.
Posted by Chris Lane at 8:00 AM