I am particularly interested in the business of prints, that is the economic factors which influenced what prints were made and how they were marketed to the public. For commercial prints, as opposed to fine art prints (click here to read blog about differences), the printmakers essentially produced the prints in order to make money, either because they were commissioned by someone (a job order print) or because they believed that they could market the prints to the public (a speculative print). One type of job order print that is quite interesting but often overlooked is a premium print.

A premium print is one where a publication, usually a newspaper or magazine, would send out a print as a bonus to subscribers. Obviously, the idea was that this would encourage subscriptions, the income from which would make up for the publisher's cost in providing the premium print. 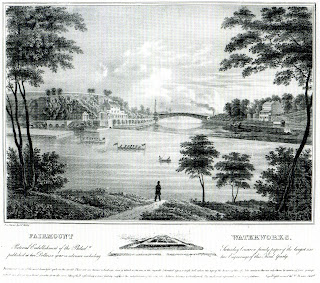 The earliest premium print I can think of (and if anyone knows of an earlier one, I'd love to hear of it) are a pair of prints commissioned by the Philadelphia Saturday Courier in 1838. These were two prints by J.C. Wild showing the Fairmount Waterworks and Girard College. On each print is an advertisement for the newspaper, along with the promise that subscribers would receive two premiums prints each year. For instance, on the print of Girard College is this text: "Pictorial Embellishment of the Philada. Saturday Courier a family paper of the largest size published at two Dollars a year in advance including two Engravings of this Kind Yearly." Though two prints were promised in future years, the only other premium print I know of for the Saturday Courier is the print "View of the Falls of Niagara" after John Vanderlyn which was lithographed by P.S. Duval, perhaps the following year. 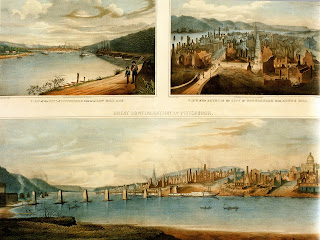 On April 10, 1845, nearly all of Pittsburgh was burned in a huge fire. In less than two months a three part lithograph showing scenes of Pittsburgh before and after the fire, by William C. Wall, appeared for sale in Pittsburgh. In August, Whitney, Dumars & Wright, publishers of the Pittsburgh newspaper Morning Chronicale ran an advertisement for Wall's print to be used as a premium for another paper they published, The Iron City and Pittsburgh Weekly Chronicle. The advertisement read: “Splendid Pictures of Pittsburgh!!! Great Inducements To Subscribers! THE IRON CITY, And Pittsburgh Weekly Chronicle,… TO SUBSCRIBERS we offer the following inducements: each person remitting by mail, free of postage, or sending us otherwise, two dollars, the price of one year’s subscription, will be entitled to receive gratis one of WALL’S LARGE LITHOGRAPHIC PICTURES OF PITTSBURGH, Which give three different views of the city.” 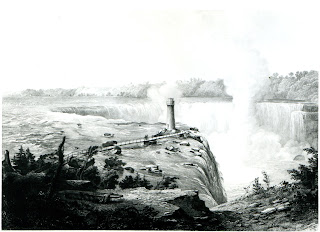 These are quite early for premium prints and only a few others were issued by the end of the 1850s. In 1855, The New York Albion offered a premium of J.B.Wandesforde's “Niagara," and sometime in the same decade Sartain's Union Magazine produced a premium print of George Washington and his family, based on the drawing by Edward Savage. This print introduced the notion of using political prints for premiums and in the 1860s many of these appeared, most featuring images of Abraham Lincoln. 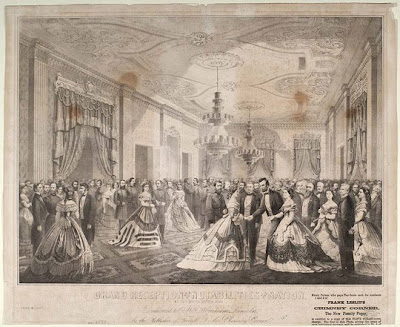 On April 8, 1865, just a week before the assignation of Lincoln, Frank Leslie issued a print of “Grand Reception of the Notabilities of the Nation, at the White House 1865." This print shows Lincoln, with Mrs. Lincoln by his side, at a “Grand Reception” in the White House, receiving General and Mrs. Grant in a room filled with most of the notable figures of the government and army. On the print is printed a price of $3.00. However, Leslie was the pubilsher of Chimney Corner, a "New Family Paper," and he used this print as a premium to attract subscribers. On a few copies of this print, Leslie printed an advertisement for the paper which explained how this worked, stating that "Every Person who pays Ten Cents each for numbers 1 and 2" of the paper would get the print for free. These copies would have been distributed thoughout his outlets in order to increase the sale of The Chimney Corner. The cost of two, ten cent issues was not a bad deal for a $3.00 print! In order to keep his subscribers a bit longer, Leslie promised to issue a key to the print, to be published in volume 4 of the paper. 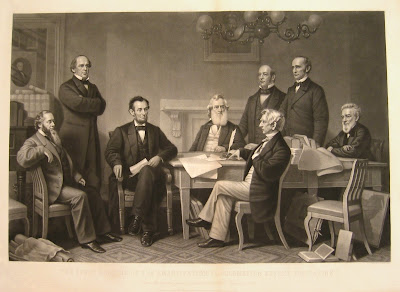 My favorite Lincoln premium print is Francis B. Carpenter's “The First Reading of the Emancipation Proclamation Before the Cabinet." Carpenter spent many month producing this print of Lincoln and his Cabinet, actually being invited to work in the White House with access to Lincoln and the Cabinet members. The print was produced initially by Carpenter to be sold as a separate print, but the interest in images of Lincoln spurred by his assignation, inspired the newspaper The Independent to contract with Carpenter to run off copies to be given out to subscribers. This is one of the great American historical prints of the nineteenth century which would have been received free by all subscribers. Quite a deal! 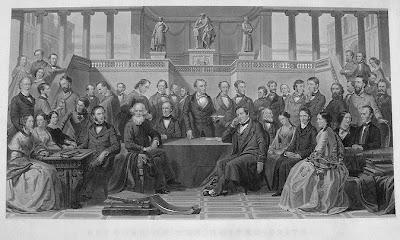 Another fine, large premium print from the 1860s is Thomas Hicks "Authors of the United States,” also published as a premium for The Independent. The publisher, Henry C. Bowen, wrote in 1872,

For some time past I have been giving Ritchie’s magnificent steel engraving of "Authors of the United States" as a premium for two new subscribers to The Independent and have given away nearly nine thousand without a single complaint of dissatisfaction. In order still further to extend the circulation of The Independent and to place this fine engraving within the reach of all I have decided to offer it hereafter until further notice, for one new subscriber. Any one may obtain this splendid engraving, postage paid, by sending $2.50 with his own name or that of any other party, not at present a subscriber. This is certainly the most beautiful and most valuable premium ever offered in the country for one subscriber. The size of the engraving is 19 by 35 inches. The steel plate alone cost me $4,500.00. 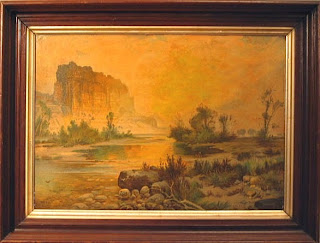 Premiums prints continued to be used especially in the 1870s, when many magazines offered such prints, often done in color. A number of foreign language papers, aiming at the immigrant population, offered such prints, including a chromolithograph of the Monitor vs. the Merrimac ("Striden Emellan 'Monitor' och 'Merrima'") for the Swedish language paper Nya Verldens in 1877. The Aldine was published from 1868 until 1879 as “the art journal of America.” Within its pages were fine commissioned images by such famous artists as Thomas Moran, who was the artist of two premium chromolithographs issued in 1874, including one of “The Cliffs of Green River," in Wyoming.

These are just some of the premium prints issued in the nineteenth century. Later this week I will post an article written by print scholar James S. Brust about some other interesting premium prints, including some by Currier & Ives.
Posted by Chris Lane at 8:08 AM