In the previous blog in this series, we saw how in the first decade of the nineteenth century, the United States approximately doubled its size with the acquisition of the Louisiana Purchase, from which the Territory of Orleans—-consisting of those relatively settled lands in the southernmost part of the purchase-—was broken off as a separate entity. 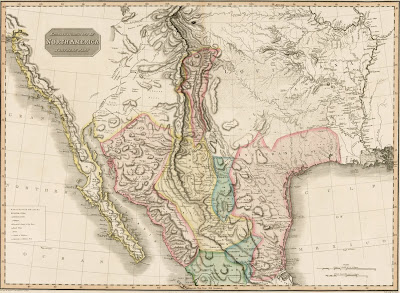 While the basic outline of the Louisiana Purchase was fairly clear, essentially encompassing the lands west of the Mississippi River, drained by that river and its tributaries, the exact borders between the new American lands and those of New Spain in the southernmost part were open to debate. The Americans claimed that the Sabine River should be the border, whereas the Spanish claimed a border further to the east at the Calcasieu River.

Negotiations between the countries broke down in 1805, with Spain severing diplomatic relations with the United States. Over the next year there was conflict, in words and deeds, between the two countries over the lands between these two rivers. Finally in 1806, an agreement was signed to establish this as a neutral ground, which neither side would settle nor try to govern. Inevitably, into this lawless land, lawless individuals gathered and it became a hotbed for bandits who preyed on travelers. The border was eventually established as the Sabine River by the Adams-Onis Treaty of 1819.

As I mentioned in the previous blog in this series, the large territories which were added to the United States west of the Mississippi River in the nineteenth century were divided into smaller units as they became settled; usually these smaller units were created first as territories, then later admitted as states once they reached a certain level of development.

In 1812, the Territory of Orleans became the State of Louisiana, but this had as much to do with the issue of slavery as with the region's development. Since the founding of the nation, there had been a fairly even balance between slave and non-slave states, but this was disturbed with the admission of Ohio in 1803, which would soon be followed by other non-slave states created out of the old Northwest Territory. Southerners were keen to add a new slave state to balance this trend, so Louisiana was admitted less than a decade after Orleans had been created as a separate territory. 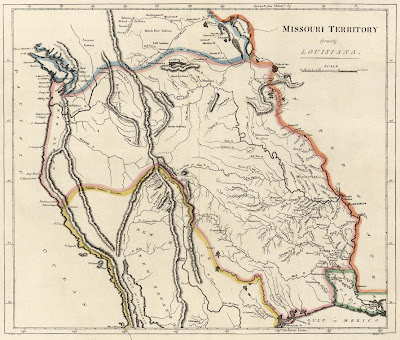 That same year, in order that it not be confused with the new state of Louisiana, what had been the Louisiana Territory was renamed as the Missouri Territory. This was the remainder of the original Louisiana Purchase outside the new state. At that time, these borders were still not firmly established, but by the end of the second decade of the century, the borders in the north and south were defined by agreement with Britain and Spain respectively.

To the north, the border with the British in what is today Canada was established by the Anglo-American Convention of 1818, to follow the 49th parallel from Lake of the Woods to the continental divide. This in effect gave the United States the southernmost part of the Red River Valley and the British the northernmost part of the Missouri River Valley. The Adams-Onis Treaty of 1819, which had fixed the border of the new state of Louisiana, also clarified the rest of the border between Spanish and American claims for the new Missouri Territory. The United States gave up its claim over Texas and also gave to the Spanish lands between the Red and Arkansas Rivers, essentially in exchange for Florida. In the same year as the Adams-Onis Treaty, the Territory of Arkansas was established from the lands south of the 36.30 degree parallel, running from the Mississippi River to the new border with the Spanish lands. The year before, in 1818, Missouri had applied for statehood. Centered on St. Louis, the pattern of settlement in Missouri had left something of a gap between the proposed state and Louisiana, so it seemed prudent to organize those lands into this new territory, especially given the large immigration there beginning in 1810, of both Anglo-Americans and Native Americans. 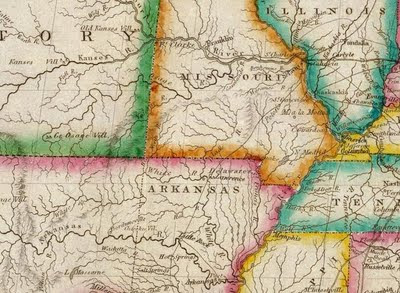 The line between the proposed state of Missouri and Arkansas was set at the 36.30 degree line, the same parallel that separated Tennessee and Kentucky. The one exception was the Missouri “Boot Heel,” which consisted of the lands east of the St. Francis River between the 36.30 and 36 degree lines. The reason for this land being assigned to Missouri and not Arkansas was essentially that the economy and settlers of the boot heal were intimately connected with the rest of Missouri, but some interesting legends about its creation have been put forth.

One story has it that a farmer who lived there asked the government to not make his land part of Arkansas, because he heard it was so sickly in Arkansas, “Full of bears and panthers and copperhead snakes, so it ain’t safe for civilized people to stay there overnight even.” Another story tells of a love-struck surveyor who ran the line further south in order to spare the feelings of a window who lived there and believed she lived in Missouri. 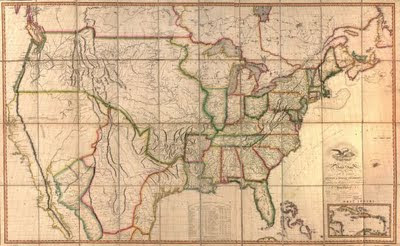 While the Arkansas Territory was created in 1819, the state of Missouri didn’t appear until the following year---a story to be told in the next blog in this series. So at the beginning of 1820, the United States west of the Mississippi had its borders fairly well established and it consisted of the state of Louisiana, the territory of Arkansas, and a large Missouri Territory encompassing all else.
Posted by Chris Lane at 5:52 PM