Next week I am heading off for another Antiques Roadshow taping, this time in Tulsa, Oklahoma. For those interested in western art, this means one thing: the Gilcrease Museum, one of the greatest museums of the art of the West.

My pending visit to Tulsa, together with our recent acquisition of a good collection of prints of the American West from Harper's Weekly, got me thinking about William de la Montagne Cary (1840-1922), better known to print collectors as W.M. Cary. That is because when Cary died, a large collection of his paintings and drawings were acquired by Thomas Gilcrease and they now reside at the Gilcrease Museum. 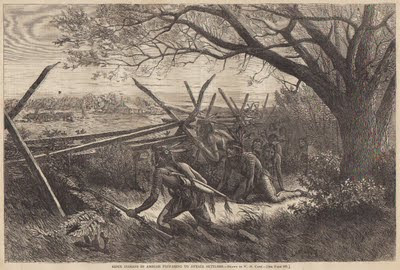 Cary was one of the significant contributors to the depiction of the American West in illustrated newspapers. His Western prints appeared beginning in the late 1860s and then continuing in subsequent decades, mostly in Harper's Weekly, but also in Frank Leslie's Illustrated Newspaper and other illustrated periodicals. Like most of his fellow Western illustrators, Cary based his drawings on his own experience in the American West. 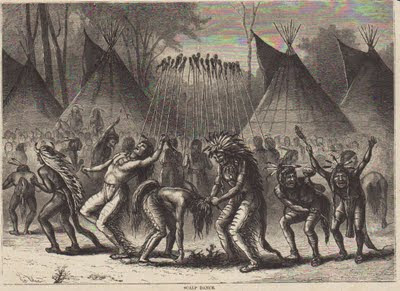 Cary began his art career at age fourteen as an apprentice to a commercial engraver. By age 20, he had worked in watercolor and oil, done some sculpture and had contributed a number of drawings to illustrated periodicals, such as the Aldine. Though encouraged by his family to pursue his artistic career through formal study abroad, Cary decided he wanted to seek adventure in the American West. 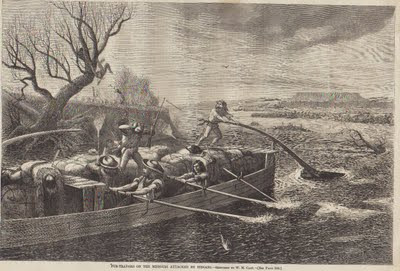 In early 1861, with two friends, Cary set off on a “sporting expedition” to the West, traveling from St. Louis, aboard American Fur Company steamers, up the Missouri to Montana, surviving a fire and exploding boiler along the way. They spent six weeks at Fort Union, hunting and befriending the Indians camped around the fort. Then the young men joined a wagon train and set off to Fort Benton. Along the way they were captured and then released by a band of Crow Indians, and upon arriving at Fort Benton they stayed for another two weeks hunting and exploring the area. From thence the threesome set off by foot and horseback across the Rockies to Washington State, subsequently returning back to New York City about a year after they had set out.

In 1867, Cary went West again, where he painted portraits of George Custer and William “Buffalo Bill” Cody, the latter becoming a lifelong friend. In 1874, Cary made a last trip to the West, joining in with the U.S. Northern Boundary Survey Commission on the last part of their expedition. 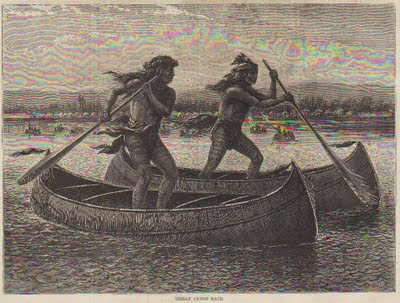 In New York City, Cary had set up a studio and became a well-established artist, known particularly for his western themed art. Cary produced paintings and also a number of images which were made into lithographs, etchings and book plates. His most prolific work, however, were the images he provided for the illustrated publications.

His periodical illustrations are of considerable interest. Many were based on first-hand observations and others were “imaginary scenes suggested by events at the time of their depiction,” (Robert Taft, Artists and Illustrators of the Old West, p. 53) though always informed by his considerable experience in the West. With our recent acquisition of a group of Harper's Weekly wood-engravings of the West, I was particularly struck by W.M. Cary's images of Native Americans. 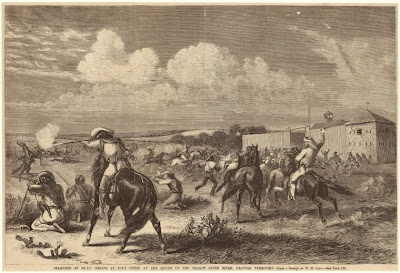 Relationships between the Plains Indians and the EuroAmerican emigrants from east of the Mississippi, who passed through and then into the region in increasing numbers, had been problematic from 1850s on, with an on-going series of conflicts scattered in among a regular succession of "wars" and treaties. With the discovery of gold and the building of railroads across the Plains, "Indian Wars" were a regular occurrence and readers in the East had an insatiable interest in news of the dramatic events on the frontier.

Accounts appeared in books and periodicals, but the most common form of visual information about the Indian affairs of the West were the wood engravings from the illustrated newspapers. Cary was one of the most prolific contributors to this body of images in the 1860s and 70s, and he probably was the artist whose drawings were the most dramatic. Thus, it is not unlikely that Cary's prints contributed a large element to the visual image that most EuroAmerican's had of the Native Americans. 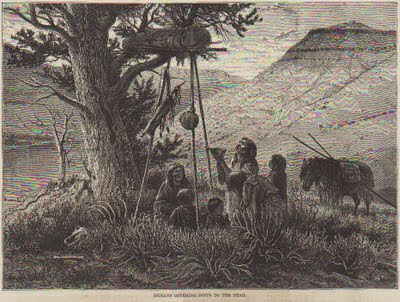 So what were they like; what sort of image did Cary give on the American Indian? The sample is somewhat small and so my thoughts that follow are very speculative, but I think it is interesting see what we can discern by looking at Cary's prints. 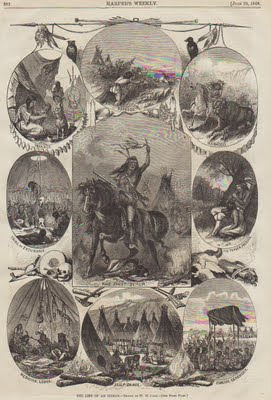 The prints from the 1860s were drawn when Cary was still in his 20s and not long after he had lived through a number of his own adventures in the West. These prints show the Indians as blood-thirsty and with exotic customs. They are shown attacking a fort and a boat-load of trappers and sneaking up to ambush peaceful settlers. The centerpiece of his "Life of An Indian" shows a brave proudly holding up his "First Scalp," while other images show him hunting and undergoing the "Trial of Endurance." It should be noted that in this print there is a nice vignette of an Indian mother and infant and also of a brave playing a flute for his son. Still, the Cary images of this period emphasize the wild and war-like. 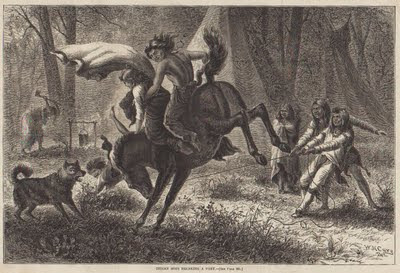 The prints from the 1870s do, I think, exhibit a different emphasis (that is excepting Cary's wonderful image from the Aldine in 1873, showing the results of an Indian attack on a Pike's Peak gold-rusher, illustrated at the bottom). In his prints from the 1870s, Cary shows more images of Indian life, such as a canoe race, breaking a pony, and dealing with death. 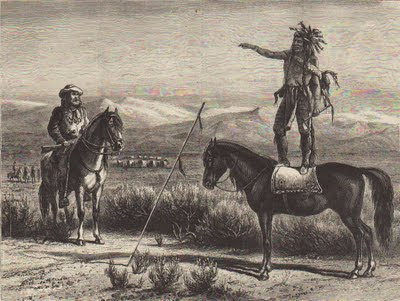 In 1874, Cary did produce two images entitled "Sketches of Indian Warfare," including a scene of the Scalp Dance, but the other engraving shows the Indian less threatening than threatened. A chief stands on his horse, raising his hand to try to stop a wagon train passing through his lands. The Indian, armed only with a bow, spear and tomahawk, is facing men clearly armed to the teeth with guns and a train of innumerable wagons. One gets the sense that Cary no longer saw the Indians as wild savages (though it is not clear he ever did, for the earlier emphasis may have been more for popular consumption than his true feelings), but as members a doomed culture worthy of trying to understand. 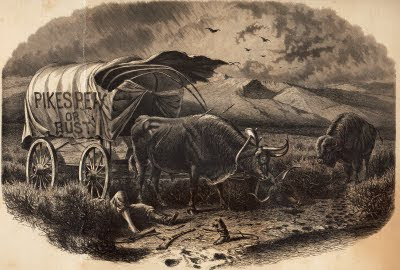