Last week I attended a breakfast meeting at the Denver Public Library about their new Creating Communities project. This is a terrific program which is designed to make the historical resources of the library, as well as those from other affiliated institutions, accessible to the general public through the Creating Communities web site. As a die-hard believer in the use of historical material to promote knowledge and understanding of our past, and so also of our present, I was delighted to find out about this program. 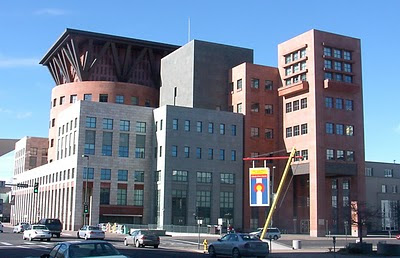 First a word about the Denver Public Library. Until this summer, I lived for the last three decades in Philadelphia, which has one of the oldest and best public library systems in the country, so I was very pleased to find that the Denver library system is also absolutely first rate. The library was established in 1889, the city librarian calling it a “center of public happiness.” In 1910, a new Central Library building was constructed, and then over the next decade eight branch libraries were built, all with the generous help of Andrew Carnegie. As the library system matured, new branches were opened, old ones refurbished, and in 1995 an outstanding new Central Library was built, designed by Michael Graves.

I am a fan not only of libraries, but also of institutions which hold collections of prints & maps. It turns out that in Denver the public library is the institution in this area with the best collection of historic printed images, a collection held in the Western History and Genealogy department. Their collection of Western Americana is, without question, one of the best in the country.

Opened in 1935, the Western collection was initially intended to focus on books by Colorado authors, but soon the department broadened its focus to encompasses all phases of the development of the trans-Mississippi West. To quote the library web site, “[t]he collection continues to grow and presently includes 200,000 cataloged books, pamphlets, atlases, maps, and microfilm titles. In addition, it offers 600,000 photographs, 3,700 manuscript archives, and a remarkable collection of Western fine art and prints to researchers across the world.” 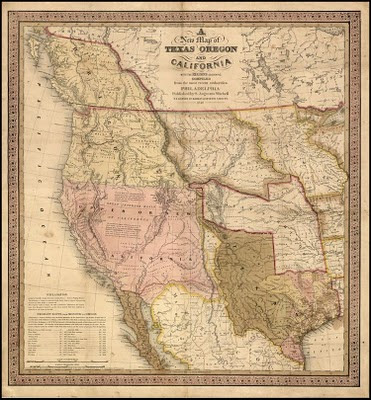 Among the collections in which the library is particularly strong are publications of Western railroads, reports and maps of Colorado mining companies, trade catalogs, records and printed memorabilia of Buffalo Bill's Wild West shows, frontier theater programs, land grant materials, Colorado territorial imprints, architectural drawings, and extensive clipping files of local newspapers. The maps and atlases, of which there are about 6,000, and the historical views are, of course, of particular interest to me. The Western Collection is a place I plan to spend much time researching.

As with any library, one of the main goals of the Denver Public Library is to reach out to the community, both to provide it with access to its resources, but also to stimulate curiosity and increase knowledge. That is what Creating Communities does. Other local institutions are also involved in the project, including the City of Denver, History Colorado, the Auraria Library, the University of Colorado at Denver, and the University of Denver Penrose Library. This program makes available on the web many of the resources about Denver and its history from these institutions. One of the main parts of the web site is a section with information on seven of Denver’s historic neighborhoods, and many of the Western Collection’s archival materials, in digital form, are also available through the site, including property maps of the city.

An interesting part of the program is “myDenver”, which is designed to allow the general public to upload photographs and stories of their own, and to be part of an ongoing conversation about their city. The further development of myDenver is one of the main goals of the Creating Communities program going forward. 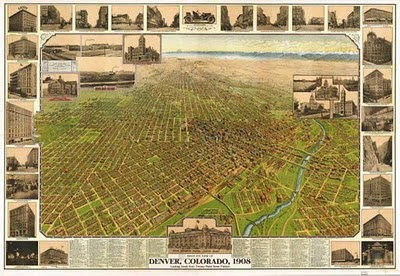 I was rather spoiled by the extensive institutional riches of Philadelphia and I was a bit concerned in moving to “the West,” that I would be bereft of this important type of resource. I was, as I should have known, mistaken in this, for Denver not only has its own rich history (though not as long a one as Philadelphia) but also its own wealth of historical material which available to me and to anyone else with an interest in the history of this wonderful city.
Posted by Chris Lane at 2:47 PM