Fun with maps of the American West

The Philadelphia Print Shop has always carried maps of the American West and we have done a reasonable business in them, acquiring and selling many of the great nineteenth century maps of that region. However, I have never studied what the maps showed specifically of the American West, really looking at what they depicted. I studied the maps as historical documents, but not as physical objects. Now that I am about to head out to live and open a shop in Denver (I leave Philly in just under two weeks!), I have started to look at these maps more closely and boy am I having a blast!

As I have written before, new cartographic information on maps is often what makes them specially interesting and valuable. The first depiction of a particular place, changing political borders, new discoveries of mountains and rivers, or corrections of previous mistakes are the stuff that make map collectors drool. I am trying to learn more about the geography of the American west and as I now closely study the maps we have in stock I am finding all sorts of fun things I was unaware of before. I plan to write a number of blogs on this subject (as I think it is pretty cool), and today I am going to use the example of four unprepossessing maps of North America from the mid-nineteenth century. 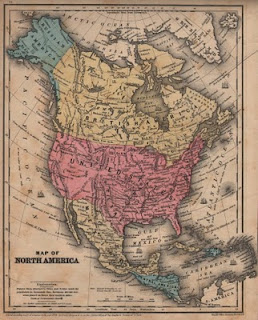 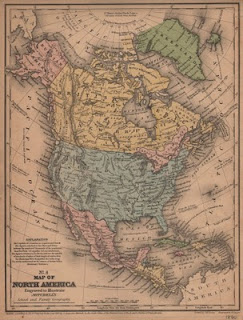 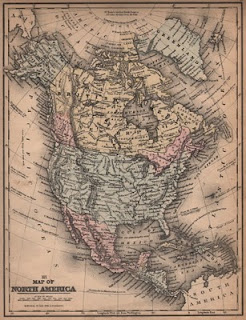 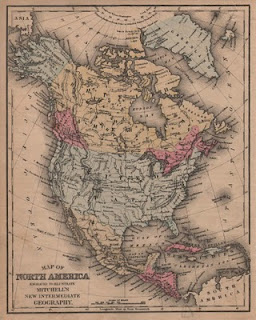 These are quite small maps that probably have been sitting in our map drawers for over a decade, pretty much just ignored. They were all issued in different nineteenth century geographies, the type of geographies that were probably intended for students. They are small maps, are colored only in broad sections by country, and frankly, before I decided to move to Denver, I pretty much thought they were an uninteresting 'much or a muchness.'

I am trying to learn about the history of the mapping of my new home, Denver, which is located between the vast plains and the steep Rocky Mountains. The junction of Cherry Creek and the south branch of the Platte River was a place where Indians and trappers had camped for years and with the discovery of gold there in 1858, several towns soon appeared, which morphed into Denver within a short time. Colorado Territory was formed in 1861 and Denver became a major western town by the 1870s.

The earliest maps of the region around Denver show the Platte River and usually Cherry Creek, though the latter is often not named. Denver is located a bit southeast of Long's Peak and a bit northeast of "Pikes Peak." If you look on a map for the south branch of the Platte River and those two mountains, you can hone in on the location that would eventually become Denver. I started doing this for almost every map we have from the mid-19th century and it was by doing this that I discovered these four geography maps are a lot more interesting than I thought! 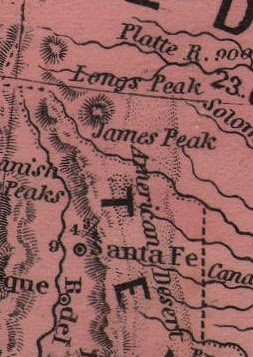 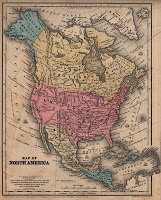 The earliest of the four is from Roswell C. Smith's A Precise and Practical System of Geography, published by Burgess & Co. in 1853. As you can see from the detail above, it does not have a lot of information on the Denver area and some of that is incorrect. It does show Longs Peak and Pikes Peak, but the latter is here identified as "James Peak," a name that was sometimes used for Pikes Peak until the name became attached to the present-day James Peak. It does show the southern branch of the Platte River (which is identified by this name), but rather than curling south along the foot of the Rockies, it is depicted as running straight west between the two indicated peaks.

The other interesting thing about this map is that it shows the "American Desert." This was a description given in the early nineteenth century to the “high plains” that border the Rocky Mountains to the east. “Desert” was used in the sense, common at the time, of a treeless area unfit for cultivation. Early explorers were unimpressed with the high plains. Zebulon Pike put a legend on his map that the region had “not a stick of timber,” and Stephen Long’s 1823 map labeled the area the “Great American Desert,” the accompanying report from his expedition stating that the region “is almost wholly unfit for cultivation, and of course, uninhabitable by a people depending upon agriculture for their subsistence.” 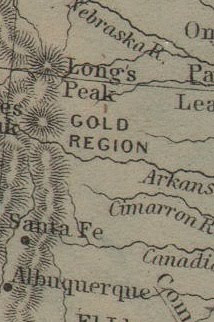 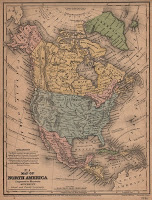 The next map was issued about 1858 by S. Augustus Mitchell, a leading American map maker and probably the largest publisher of school geographies of the period. 1858 was, of course, the year that gold was discovered in Denver. Gold had been panned in the South Platte River as early as 1849 to 1850, but it wasn't until 1857 and 1858 that significant gold was found near Denver, precipitating the Colorado Gold Rush what would last until about 1861, with an estimated 100,000 gold prospectors participating (their slogan was "Pike's Peak or Bust!"). Here, on a map issued just at the beginning of the Gold Rush, Mitchell marks the location in capital letters as "GOLD REGION." The Platte (here called the "Nebraska River") meanders to an end right in the Denver area. 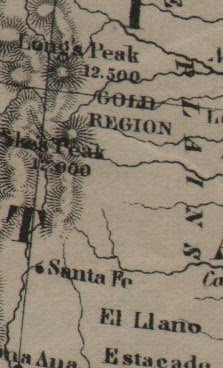 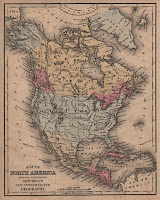 The next map was also issued by in a Mitchell publication, Mitchell's New Intermediate Geography, but this one published by J.H. Butler in Philadelphia in 1875. By 1875 a lot had happened in the Denver region, but this map shows no new information, other than the heights of Longs and Pikes Peaks and the modification of the course of the Platte, which has now been extended further and more southerly. I think this was somewhat typical of the maps published in student geographies; there was little care to keep them very up-to-date, it being cheaper to simply reissue the same map year after year. 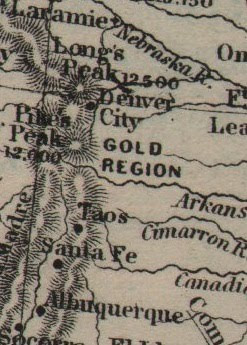 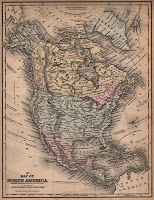 The last of these four maps is undated and has no publisher, but it is very similar in size and style and coloring to the other four maps. Our best guess for a date is about 1870, and here for the first time on one of these geography maps is "Denver City." right besides the Platte as it correctly winds its way south along the edge of the Rockies. By 1870, the railroads finally reached Denver and it began to change from simply an old gold rush city to the Queen of the High Plains that it would become.

While none of these maps has any real significance for map collectors, and none of them are that impressive aesthetically (though they are all pleasant enough in appearance), they become fascinating once you start to look closely. I only studied the immediate Denver area and I am sure that there are other spots around the continent where these maps either show new information or anachronistically ignore major changes. This is just one example of the fun that can be had by studying nineteenth century maps of the American West. I plan to publish some more blogs on similar topics in the not too distant future.
Posted by Chris Lane at 4:53 PM