One of the main appeals of lithography in the early days after its invention by Alois Senefelder in 1798, was that it was an excellent medium for the presentation of artistic renderings. Not only was it a medium which was relatively easy for artists to use themselves, but the range of tones and facility of line allowed for the close copying of paintings and drawings by skilled lithographic artists. The French were particularly adept and interested in this use of lithography and so many fine examples of French art appeared as lithographs in the first decades of the nineteenth century. 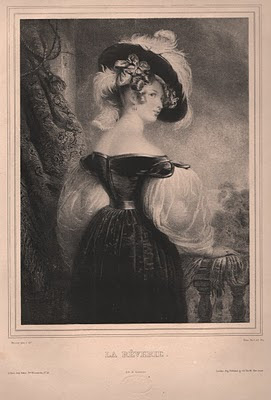 The lithograph above, “La Reverie," is based on painting by Henri de Caisne, showing a young woman caught in the midst of a day dream. The solid black rim of her hat and black dress contrast with the white feathers and her pale skin. Her right hand rests on a balustrade and to her left is a column almost covered by a billowing decorative curtain. Caisne (1799-1852) was a painter born in Brussels, who worked in Paris and exhibited in the Salons of both cities.

His charming image is rendered beautifully by French lithographer Alphonse Leon Noel (1807-1884), published by the french firm of Rittner & Goupil in 1829. Noel studied as an artist under Gros and Herson, but early on turned his attention to the new medium of lithography, his first print issued in 1827. Noel continued to work as a lithographer until 1866, becoming very well know as a lithographic reproducer of paintings and portraits, especially the work of portrait painter Franz Xavier Winterhalter. Noel’s lithographs number more than 1,000, of which 600 are portraits. 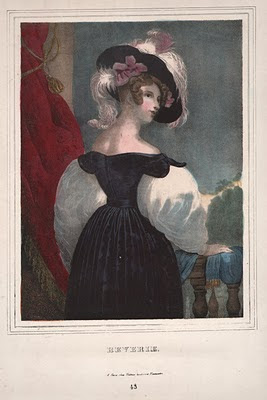 The second print, “Reverie,” here shown in a hand colored example, is a very close copy of Noel's lithograph, though this one lithographed by Dominico Canova about 1830. In the mid-1820s Canova worked for printmaker Anthony Imbert in New York, lithographing several plates for a commemorative publication in 1825 on the opening of the Erie Canal titled Memoir...presented to the mayor of the city, at the celebration of the completion of the New York Canals (cf. image on right). Canova also produced a number of other prints for Imbert and became an independent lithographer in the early 1830s in New York. Canova's lithograph is clearly copied from Noel's lithograph. Interestingly, the imprint indicates this print was published in Paris, this time by Rittner alone. 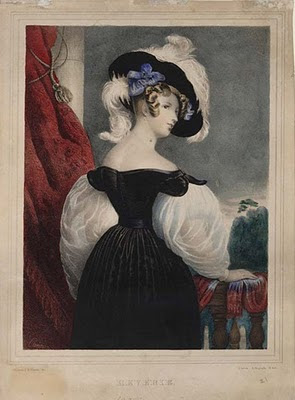 Of considerable interest is that there are other examples of this print, lithographed by Canova, which list Imbert as the printmaker. The example illustrated above is in the Harry T. Peters Collection at the Smithsonian Institution. They obviously look alike and a close examination shows that they actually came from the same lithographic stone. Canova’s signature, the size and composition of the image, and the four lines that surround the image are all exactly the same.

So, how does one explain the same print appearing on both sides of the Atlantic? That Imbert would have Canova copy the Noel lithograph makes sense. In the early part of the nineteenth century, French culture was emulated widely in America and prints "in the French style" were very popular. There was no great body of American art comparable to that of the French and so many American printmakers copied French prints in this period.

But why is there also an example of the same print with a Paris imprint, when the lithograph was made by an American lithographer. Especially why would a French printmaker involved in the publication of the first, French lithograph use an American copy? It is possible that Imbert, originally a Frenchman, may have known or worked for Rittner before moving to the United States. Imbert, seeking to make as much money as possible, perhaps sold the prints to Rittner, who then printed his name as publisher for European distribution. Something of a puzzle that would be fun to explore a bit more... 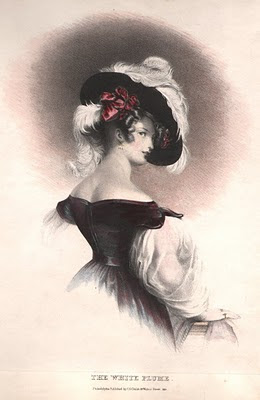 There is (at least) one more image based on Caisne's painting, this one entitled "The White Plume." This print was both lithographed and published, in 1830, by Philadelphia printmaker Cephas G. Childs (1793-1871). Childs was a native of Bucks county who became an expert engraver and print publisher in Philadelphia (he ended up living in Chestnut Hill, just a few blocks from our shop!).

In 1829, Childs formed the lithographic firm of Pendleton, Kearny & Childs. A year later, he went into business for himself, which did not prove successful, and in the same year acquired a partner, the New York artist Henry Inman. In 1831, Childs went to Paris to learn more about lithography, and returned with the lithographer P.S. Duval. Childs & Inman often used George Lehman as an artist, and Lehman went into partnership with Childs after Inman left in 1833. Despite his energy, skill and popularity, Childs never made much money in lithography, and so in 1834 he abandoned the business to become a newspaper publisher. That year, Child’s place was taken by Duval and the firm became known as Lehman & Duval. Lehman would eventually leave, and the firm under the leadership of P.S. Duval, would become one of the most respected and prosperous lithographic shops in the United States.

Like Canova, Childs based his print, “The White Plume”, on the French lithograph “La Reverie.” However, Childs changed the composition by eliminating balustrade, curtain and dark atmospheric setting to solely focus on the costumed figure. With the change in composition came a change in the title. This was likely done to accommodate American sensibilities. The editors of the United States Gazette, in April, 1830, commented enthusiastically:

“We had the pleasure yesterday of examining several beautiful lithographic prints from the establishment of Col. Childs in Walnut Street, and while we admire the positive beauties of all, we were especially struck with the evidences of rapid improvement within a few months. Most of our citizens have probably seen and admired the Mad’lle Sontag from Mr. Child’s establishment, now being exhibited at the windows of the fancy stores. We compared it with a new piece nearly finished entitled “The White Plume,” and could hardly have believed that so much could be attained in a few months. The latter we think may with advantage be compared with almost any print that has issued from the lithographic press at Paris."

The editors probably were unaware of the irony of their last statement! In any case, another publication, the National Gazette, also was impressed with Child's efforts, referring to the two prints mentioned in the quote above: “They exemplify the great progress which this truly useful art is making in this country." The quality of "The White Plume" is indeed high, making this a good example of the best of early American lithography, but it is also a good example of the influence of French prints on this new industry. The meaning of the other American-made copy, by Canova, is not so clear.
Posted by Chris Lane at 8:00 AM