The 2009 tour of Antiques Roadshow has come to an end, as the crew and appraisers head back to their homes after a final successful stop in San Jose. The weather was beautiful and a good crowd appeared with the usual mix of items, from the ridiculous to the fabulous. At the Print & Posters table we saw a wide range of prints, with some really wonderful things coming in. There were not as many unusual things as I saw in Raleigh, but still I was pleasantly surprised by some items brought in.

I had hoped that in San Jose I would see some California lithographs or at least some local views, but nothing of that sort came in (these prints are really rare, but I had hoped!). I also had anticipated that I would finally see a top-end Dutch world map from the sixteenth century. I did see one of these, but unfortunately it was a reproduction and not an original. Both the owner and I were disappointed, but it was a good teaching opportunity and I showed the owner how the map didn’t have a centerfold, that the there was no platemark, and that it was not printed on “laid paper,” all of which is evidence that it wasn’t an original. (You can read more about these and other ways to verify an antique map on the Roadshow website in their “Tips of the Trade” section.) 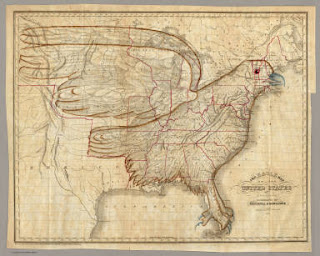 I had also guessed that I would see some good western maps and in fact I saw two great folding maps, both worth five figures. One of these was a dramatic folding map of the United States from 1833 that includes a diagram of an eagle imposed over the geographic information. This is quite a rare and unique visual map that I had not seen in person before. The other map was a folding map of California from shortly after the Gold Rush. One of the rarer and more desirable maps of the state.

Neither of these maps, however, was taped to appear on the show when the new season starts in 2010. Why, when they both were graphic, important, and valuable? This is because the owners were both sophisticated collectors who knew exactly what they had and pretty much knew the current value. As I discussed in my previous Roadshow blog, appraisals where we are able to teach the owners something new about their objects make the “best television” and there really wasn’t anything new I could tell these owners, other than perhaps a more up-to-date value. I was delighted to see these maps and enjoyed sharing my enthusiasm with the owners, but these items were not taped for the show. 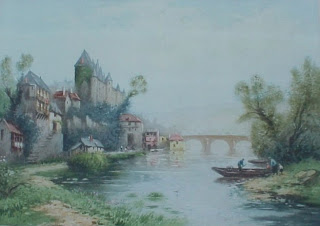 I have also mentioned in the previous Antiques Roadshow blogs how most cities seem to have a “typical” type of print that shows up more than at other cities. This did not happen in Raleigh, but San Jose played true to form. The type of print which we saw a large number of (I would guess we saw about 40 over the course of the day) were what we call “tourist prints” from the beginning of the twentieth century. These are hand-colored aquatints or etchings that tend to show scenes from European villages or landscapes. They are usually immediately identifiable by their somewhat “soft” appearance, pastel colors, and indecipherable signature.

These were produced by publishers who hired art students or “commercial” artists to create these prints to be sold to tourists who wanted to take something home with them from their trips around Europe. (One of these publishers was Sidney Z. Lucas, the subject of my previous blog) They are nice prints, but almost never by an artist who is of note. They were made of most tourist villages in Europe and were produced in large numbers between about 1910 and 1940. The prints are originals and are usually quite attractive, but because they are not done by noted artists and were issued in large numbers, they have only “decorative” value. 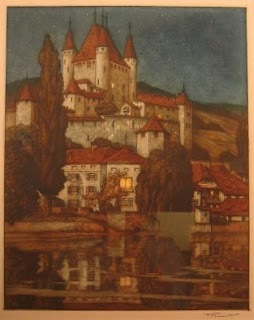 As I said, the signatures are almost always impossible to read and people bringing these to Antiques Roadshow always want us to tell them who the artist was. We usually cannot, both because the artists are obscure, but also because we can’t read the signatures either. I am convinced that this incomprehensibility of the signatures was intentional to make the prints seem “special” or “artistic.” If the print was clearly signed by, say, “Jacques Pepin,” who no one knows, that isn’t very exciting, but when a print is signed by “squiggle-squiggle” then it seems more exciting or artistic, and potentially valuable. In any case, we see lots of these at every Antiques Roadshow stop, but there were far more than usual in San Jose.

I did get taped with a wonderful print, but I will not discuss what it was, so as not to ruin the “surprise” when the segment airs next year. I will, however, describe what happens at the Roadshow once a print is selected for taping. As I explained in the last Roadshow blog, when a print comes in I think is worth taping, I call over a producer, who talks to me, the owner and looks at the print. The producer then gives the thumbs up or down.

If the print is selected for taping, then the owner and print are taken off to the “Green Room.” This is a place where they can wait in comfort until it is time to tape the appraisal. There is food and drink there, and television monitors so the people waiting can watch those appraisals that are being taped. During the wait, the owner will have make-up put on so he or she will look their best when the cameras are rolling. The length of the wait at this stage can vary, but I would say my experience is that it lasts between about 20 to 40 minutes (it depends on how many appraisals are lined up in front of this one).

In this time, the appraiser is also made-up and gets a bit of time to do any extra research necessary and can check up on some of the facts (what were the exact years that firm was making those prints?...). The appraisers on Antiques Roadshow come across as so knowledgeable and with an amazing number of facts at their fingertips and people often ask me how we do it. Well, I have to admit that we do often look up of specific facts before the appraisal, but still, the appraisers carry around most of the information they present in their heads.

Anyway, when it’s time to tape the segment, the owner and item are taken out to the center of the set (which is in the middle of the circle of tables where the appraisers sit). The item is put onto the table, stand, easel or whatever so that it can be taped and the owner and appraiser put on their microphones.

In the center of the set, there are three taping “stages” with one set of cameras. On one stage the cameras will be taping an appraisal, while at the stage just counter-clockwise, the owner and appraiser, who just finished, will be un-miked, the proper paperwork filled in, and the stage cleared. At the stage on the other side, the next appraisal is getting ready. As soon as one appraisal is done, the cameras are swung to the next stage and the whole process will start again, one rotation clockwise. This continual appraisal process goes on all day, so that the producer can get 50 to 55 appraisals to be used in the three episodes that will be shown beginning the following year.

The whole procedure has been refined over the 14 years that Antiques Roadshow has been going and while there are always some glitches, it is an amazingly efficient process. Of course, it only works because the staff and crew of Roadshow are great and most of the appraisers have been on the show for a number of years, so we are all used to the process. I think that many of the people who come to have something appraised at the Roadshow enjoy seeing how the program is put together as much as getting their item appraised.

So, with the last stop of the 2009 summer tour over, this is the final of my “behind the scenes” blogs about the show until next summer. The appraisers' jobs are almost done (we do have to check the transcript to make sure we didn’t make any inadvertent mistakes), but the producers' jobs have really just started. They have to go through the many hours of tape and put together three one-hour episodes from each stop. It may seem like a long time between now and January 4th, when the season premiere will broadcast, but the Roadshow producers will work very hard to get the new episodes ready and think January will be here all to soon.

I hope that now when you watch the show you will have a better understanding of how Antiques Roadshow is put together. I saw some wonderful things this summer, some of which will appear in next year’s episodes, and talking to the other appraisers I know lots of other fascinating appraisals will be shown. Check out Roadshow’s website or watch your TV listings so you don’t miss the new season when 2010 comes around.
Posted by Chris Lane at 8:00 AM