Whirlpool at the North Pole 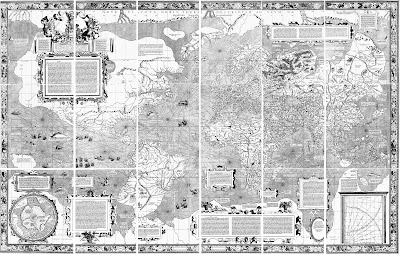 In 1569, the great Flemish cartographer, Gerard Mercator, issued this important world map—-the first to use the so-called Mercator projection—-and on that map he introduced a radical and strange notion of the geography around the North Pole. Along the very top of the map-—the width of which is exaggerated because of the projection used-—are four bodies of land with rivers running between them. 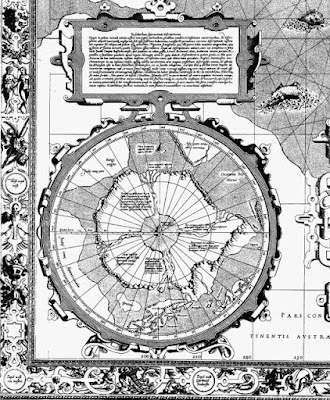 This geography was clarified by an inset in the lower left, in which you can see four islands surrounding the North Pole, upon which lies a large rock. 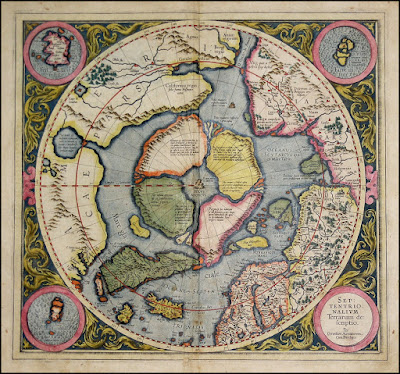 It is a little easier to see this geography on Mercator's separate map of the North Pole issued a number of years later. A legend on the earlier map states that Mercator got his geography of the Arctic from the report of a Friar and mathematician from Oxford, who supposedly in about 1360, and using “magic arts,” went to these polar islands and mapped them. Mercator’s source of this story was a since lost, fourteenth-century account called the Inventio Fortunatae.

Describing the geography of the polar region, Mercator wrote to John Dee, an English scholar and mystic, that “In the midst of the four countries [that is islands] is a Whirl-pool...into which there empty the four Indrawing Seas which divide the North. And the water rushes round and descends into the earth just as if one were pouring it through a filter funnel...Except that right under the Pole there lies a bare rock in the midst of the Sea. Its circumference is almost 33 French miles, and it is all of magnetic stone...”

Mercator shows this geography very clearly, with the four islands separated by the rivers and the large magnetic rock sitting on the pole itself, over the whirlpool where the waters descend into the interior of the globe. Other bits of information depicted by Mercator, also taken from the Inventio, include the legend that “pygmies, whose length is four feet” live on the island above Scandinavia, and another legend on the island to its left, stating it is “the best and most salubrious in all the north.”

Obviously, this is mythical geography, though the Inventio Fortunatae may have been based to some extent on first-hand reports by Ivar Bardarson, who was a priest from Greenland who traveled widely in the eastern Canadian Arctic in the early fourteenth century. Whether the story of the waters of the world passing through four rivers and then into the whirlpool was a confused misreading of Bardarson’s reports, or an illusionary creation of the Inventio’s author cannot be known. 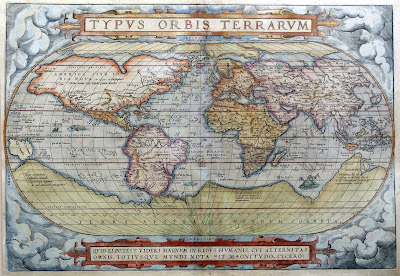 The Mercator conception was followed by a number of other late sixteenth century cartographers, such as in the world map by Abraham Ortelius from 1570. 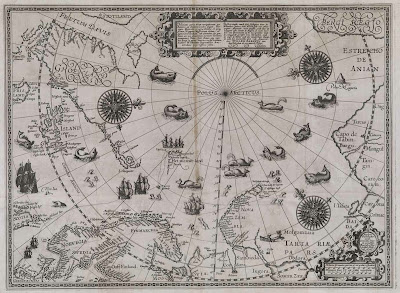 However, this misconception did not hang around for long. The latter half of the sixteenth century was a time of considerable exploration in the waters north of Europe, for instance by Hugh Willoughby in 1553 and Willem Barentz in the 1590s, and Mercator’s polar geography of the four islands and the whirlpool began to lose favor, as shown in Barentz’s own map of the polar region from 1598. This geographical myth subsequently did not last long, and it had disappeared from most maps by the fourth decade of the seventeenth century.

[Click here to see on-line lecture on this myth
and the myth of the great continent at the South Pole.]