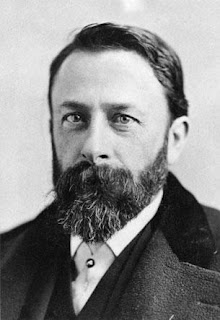 The earliest art of the American West tended to focus on the Indians and their culture. After mid-century, this theme slowly gave way to more of a concern with landscape and genre subjects, often portrayed in a “romantic” style. Perhaps the most influential artist associated with this change was Albert Bierstadt (1830-1902). He was born in Germany, near Düsseldorf, grew up in the United States, and in his twenties studied at the Düsseldorf Academy in Germany.

In Germany, Bierstadt came to be deeply impressed by the tradition of heroic painting for which the Düsseldorf Academy was famous. Upon his return to the United States he became part of the informal group of artists known as the Hudson River School. Their art work depicted a pastoral American landscape, with detailed and realistic images, but portrayed with a romantic lyricism. In later years, Bierstadt would transfer that aesthetic to the American West. 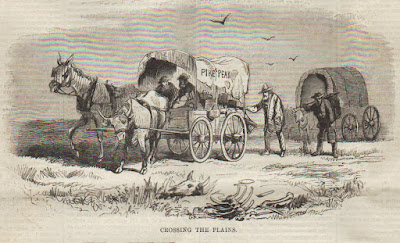 In 1858, soon after returning to America, Bierstadt paid his own way in order to accompany General F.W. Lander on an expedition to improve the wagon route from Fort Laramie to California. In June, 1859, on his way back east, the expedition arrived at the South Platte River where they found a large number of prospectors on their way to the Pikes Peak Gold Rush. Bierstadt made a number of sketches, three of which appeared in Harper’s Weekly on August 13, 1859. 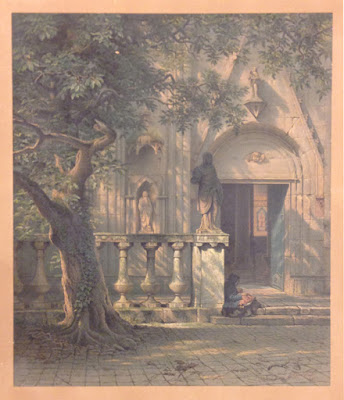 These ephemeral images were followed by a much more polished and sumptuous print of a oil painting, “Sunlight and Shadow,” which Bierstadt painted in 1862 based on sketches he had made while in Germany. The print was produced in Berlin in rich chromolithography, an elaborate process which was thought to be convey the subtlety of Bierstadt’s rendering of the dappling of light and shadow on the church door, statues and cobblestones. This print was quite a success, being touted as “the finest specimen of art yet seen in the country,” and it well demonstrates Bierstadt’s masterful use of light in his paintings.
However, it was the American West which would provide Bierstadt with his greatest subjects. From his travels in 1858 and 1859, Bierstadt was tremendously impressed with the Rocky Mountains, which would provide him with the subject matter for his most famous paintings. Bierstadt passed through the Rockies in the nascent days of the great American expansion west; the transcontinental railroad, the pony express, and most of the Indian wars lay in the future. Thus Bierstadt saw and absorbed an almost pristine frontier, for which the rocky peaks provided an emphatic exclamation.

In 1863, Bierstadt again traveled west, passing through the Rocky Mountains on the way to California. On this trip, Bierstadt made many sketches which he would mine over the years to create a series of superb, large-scale paintings which established him as the preeminent artist of the West. He was not the first professional artist to depict the west, “But Bierstadt became the most successful of them all and created a vision of the West that still endures..... Bierstadt was the first important artists to satisfy the renewed interest in landscape painting with original scenes from the West.” (Tyler, Prints of the West, p. 133) 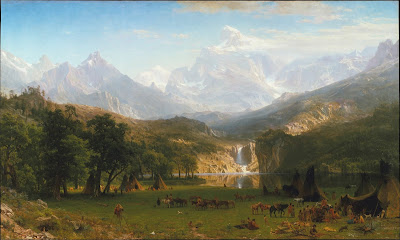 Bierstadt responded to the American West with a series of large, luminous canvases, the first being exhibited at the National Academy in 1860, where it was well received. His sensational 1863 painting, “The Rocky Mountain, Lander's Peak,” which showed the Wind River Mountains of Wyoming, received immediate popular acclaim, establishing Bierstadt, in the minds of some of the public and critics, as the greatest American landscape artist of his day. This painting traveled widely and was purchased by James McHenry for the then fantastic sum of $25,000. Bierstadt described the painting as is it were an actual scene, though it was a fictional construct based on his sketches and photographs. 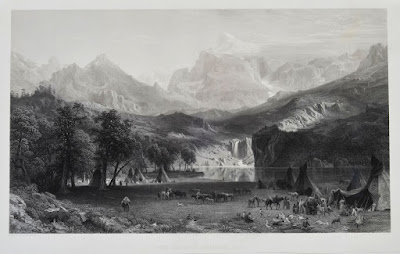 The success of “The Rocky Mountains” led Bierstadt to ask James Smillie, one of the best American engravers of the day, to produce a large engraving of the painting. It took Smillie three years to finish the print, which is considered one of the best American landscape engravings of the nineteenth century.
Following this, Bierstadt received many commissions for new works, was acclaimed at home and abroad, and hobnobbed with the rich and royal. His canvases continued to dramatically portray the awe-inspiring grandeur of the Rockies. His were “the first paintings to capture successfully the wonder and excitement that the artist and other early trail blazers felt when they confronted the spectacular western scenery.” (Trenton & Hassrick, The Rocky Mountains, Oklahoma, 1983) 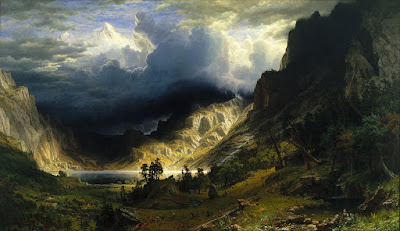 In 1866, Bierstadt produced another large, sensational painting, “Storm in the Rocky Mountains, Mt. Rosalie,” showing Mount Evans in Colorado. [Bierstadt named the mountain after Rosalie Ludlow, who would soon become his wife. It was renamed Mount Evans in 1895, after John Evans, the second governor of the Colorado Territory.] Like with the earlier painting, Bierstadt used artistic license to rearrange his sketches to achieve what he thought was the most artistic result. In the canvas, Mount Evans is shown from Chicago Lakes, arising out of the midst of storm clouds. An Indian town lies in the middle ground on the shores of a lake while a small hunting party tries to corral some horses that appear frightened by the approaching storm. 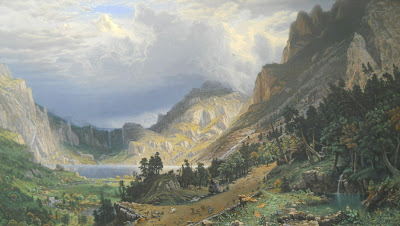 Bierstadt’s painting toured the country on exhibition and was another huge hit. A top London printmaker, Thomas McLean, purchased both this painting and his “The Rocky Mountains” in order to produce two elaborate chromolithographs. McLean used between twenty and thirty stones to make these chromolithographs, which were hailed as “unquestionably the finest examples of the chromolithographic art.” They were sold in London, New York and Philadelphia and today remain among the best specimens of chromolithography ever produced, not to mention as examples of the greatest nineteenth century art of the American West.