I recently finished reading Susan Schulten’s fascinating Mapping the Nation. History and Cartography in Nineteenth-Century America. This scholarly work examines the development and importance of thematic maps in the United States during the 19th century. (The maps discussed in the books and an interesting blog by Susan can be found on the Mapping the Nation web site) One section that really caught my attention was the use of maps as part of the national argument over the Kansas-Nebraska Act of 1854 (pages 128-130).

The crux of the issue was, of course, slavery. In the Missouri Compromise of 1820, Congress laid down that slavery would not be permitted in the Louisiana Purchase lands north of 36°30” latitude. By the Kansas-Nebraska Act, however, these new territories would be created under the process of “popular sovereignty.” This allowed the citizens of Kansas and Nebraska—-despite the fact that both were north of the Missouri Compromise line—-to vote on whether to be free or slave.

To those opposed to the expansion of slavery, this was clearly a case of Congress stepping over the line drawn, not in the sand, but on the map. This caused a huge outcry in the north, led to the creation of the Republican party, and was one of the primary causes of the Civil War.

The issue was at its core a geographic one, so it is not surprising that maps played an important role in the furor over the Kansas-Nebraska Act. The act was introduced by Stephen Douglas on January 4, 1854, and within days a “large and influential meeting of citizens opposed to any violation of…the Missouri Compromise…” was held at the Broadway Tabernacle in New York City. Called “to protest against the project now pending in the Senate of the United States, for the repeal of that section of the Missouri Act which forever prohibits Slavery in the Territories lying north of 36 degrees and 30 minutes,” the meeting was attended by about 3,000 citizens.

Of great interest was a prop used for the meeting. As reported in a newspaper, “The front of the choir, in rear of the pulpit, was illuminated by a row of lights, intended to display the proportions of a large and handsome map of the United States and the Territories, prepared for the occasion by Mr. Colton. The map was painted upon white canvas and displayed the relative sizes and proportions of the States and Territories. A heavy black line was drawn entirely across its face, from the Atlantic to the Pacific, representing the latitude of 36°30’—-the line which defines the limitations imposed by the Missouri Act. The new Territory of Nebraska was indicated in its appropriate place, as proposed in the bill providing for its organization.” (The original bill mentioned only one new territory, Nebraska, but concerns about its vast size soon caused the bill to be modified to create two new territories).

This map was drawn by George W. Colton, whose father had a map publishing firm that was one of the country's most influential, and which George would take over with his brother in about a decade. Colton’s large, hand-drawn map graphically demonstrated that slavery would no longer be limited to the southern part of the country, for if slavery were voted in by the new territories, it would extend all the way to the northern border. This map helped galvanize the meeting and was referred to by many of the speakers. 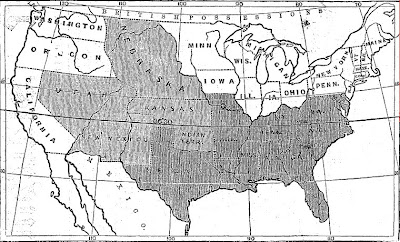 A short time after the meeting, a New York abolitionist paper, The Independent, ran a woodblock cut map “drawn for us by our obliging friend Mr. George Colton.” This map is clearly a simplified version of Colton’s painted map used at the meeting. The paper said the intent was to “present our readers with a beautiful and accurate delineation of the States and Territories of our Union, illustrating their relation to slavery.” The white states were free-soil, the black slave, and “The Territories in regard to which the question of slavery or free-soil is yet an open one, are shaded as doubtful.” 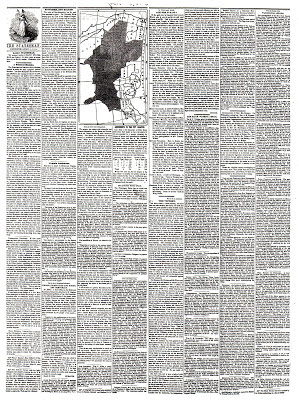 This map was seen as an effective way to raise awareness of the threat of the expansion of slavery through the Kansas-Nebraska Act and The Independent was keen to spread the word. “We have preserved the engraved block; and can furnish stereotype casts like that which we now use, for two dollars each, to any paper that desires to aid diffusing through the community a correct idea of the extent of the monstrous iniquity that is now proposed.” An example is shown above from Concord's The Statesman’s April 1, 1854 issue. 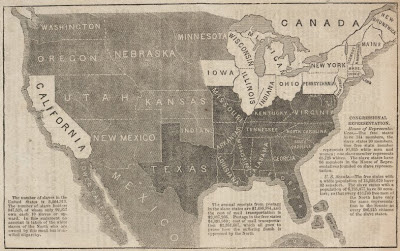 The controversy over the Kansas-Nebraska Act was one of the main forces leading to the creation of the Republican Party and the Presidential candidacy of John Fremont in 1856. Other maps inspired by Colton’s original began to appear that year, for instance a map by John Jay 1856 in the New York Tribune, where Jay called on the readers to “Now look on the map, blackened by slavery.” 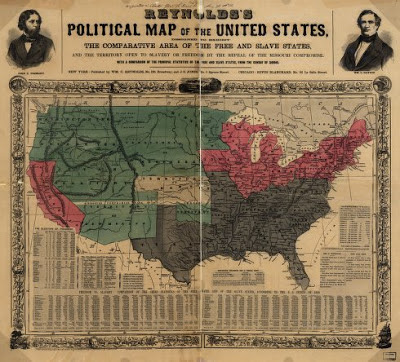 A whole series of other maps on the same theme were produced as part of the 1856 Presidential campaign. As discussed in Schulten’s book, William Reynolds issued his “Political Map of the United States,” where he differentiates the slave, free-soil, and territories “open to slavery or freedom” by the use of different colors. One thing Reynolds does as well is highlight the Missouri Compromise line with a bold white slash across the middle of the map. 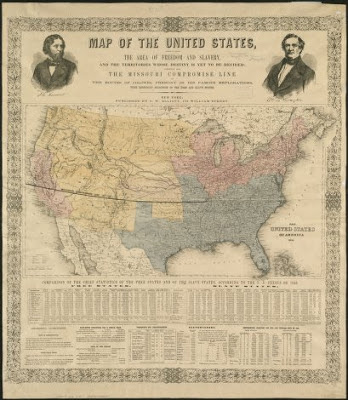 Another 1856 broadside map, by G.W. Elliott, used a bold black line to show the Missouri Compromise demarcation and also distinguished the different status of the states and territories with reference to slavery, and other such maps were used during the campaign (a previously unknown version is discussed on Susan’s blog). Maps can convey some information in a graphic form which has a power beyond that of mere words and the use of maps related to this issue is a perfect example of that power. Despite the fact that Frémont lost, these different maps related to the Kansas-Nebraska Act played an important and fascinating role in American history between 1854 and 1856.