Chon-Man-I-Case, portrait of a chief 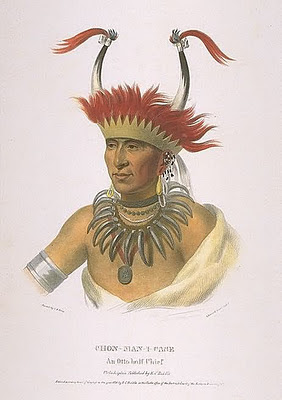 In the nineteenth century, Native American names were not written down by the Indians themselves, so the names as documented by Euro-Americans were either phonetic approximations or nicknames used as a matter of convenience. Thus it is that the Oto chief pictured above had his name written as “Chon-Man-I-Case,” in this print from Thomas McKenney’s History of the Indian Tribes of North America, but also as “Shaumonekusse,” which is the spelling that James Hall preferred in his biography. This chief was also called the Prairie Wolf and L’Ietan, the latter name used by the French perhaps because of an exploit he had against the Ietan tribe.

The Oto tribe originally came from what is today Wisconsin, but by the late eighteenth century had settled along the Missouri and Platte Rivers in today’s Nebraska. It was there that Shaumonekusse was born about 1785 and there that the tribe was located on the map which accompanied McKenney’s volume. When Stephen Long’s expedition passed through that area in 1819, Shaumonekusse was one of the warriors who described to the exploring party his martial exploits, which involved taking coup and stealing horses from many other tribes. 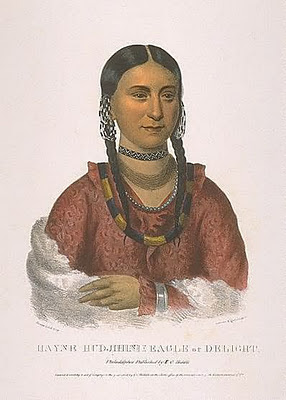 Just a couple years later, in 1821-22, a large delegation of plains Indians, from the Pawnee, Sauk, Fox, Sioux, Miami, Menominee, Chippewa and Oto tribes, went to Washington to meet with government officials, including President James Monroe. This was part of the government’s policy of both honoring and impressing Native American leaders so that they would be more malleable in making treaties (and giving up their rights). Shaumonekusse, though only a “half chief” (that is a minor chief) at the time, was part of the delegation along with one of his wives, Hayne Hudjihini, or Eagle of Delight.

At this time, Thomas McKenney was head of the U.S. Bureau of Indian Affairs. McKenney was a champion of American Indians and fought throughout his tenure to preserve something of their culture, which he recognized as an integral part of the history of America. Towards this end he started a collection of Indian memorabilia for the government and took advantage of the visit of this large delegation to have a number of the visitor's portraits painted. 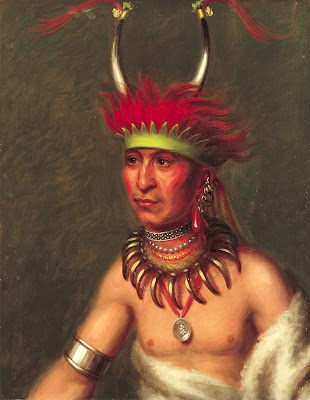 McKenney convinced some of the members of the delegation, including both Shaumonekusse and Hayne Hudjihini, to go to the studio of the leading Washington portrait painter Charles Bird King, to sit for their portraits. This was the beginning of the government's Indian portrait gallery, which grew considerably in size during McKenney’s tenure. After McKenney was dismissed from his position, he borrowed the original paintings in order to produce illustrations for his planned History.

After many ups and downs, lasting over a decade, this monumental work was completed containing 120 prints (all but three portraits) and biographies, written by James Hall, of many of the individuals pictured. Lithographic copies of both Shaumonekusse's and Hayne Hudjihini’s portraits were included. It turned out to be a good thing that McKenney undertook this project and produced these copies, for in 1865, a fire at the Smithsonian destroyed almost all the original paintings.

Shaumonekusse’s biography in the History, says of him that he “was distinguished early in life as a daring, active and successful warrior.” And according to Hall, he rose to his position as chief, not through heredity, but “gradually by his own merits.”

An interesting story, of which there are a number of versions, tells how Shaumonekusse and his brother, Blue Eyes, fought each other over ownership of some ponies, during which Blue Eyes bit off the end of his brother’s nose! Shaumonekusse retreated to his lodging to recover and try to cool off, but in the morning he was still furious, telling his brother that he was going to kill him, an act which he shortly thereafter carried out. Though Shaumonekusse was said to be distraught by this, according to Hall it was this act of revenge, which was widely approved by his tribe, which led to Shaumonekusse’s rise to being a full chief.

The portrait of Shaumonekusse shows a proud warrior, wearing an impressive bear-claw necklace and headdress with bison horns, both indicating his great prowess. He also hears a presidential medal, with Monroe’s likeness on it, given to him when he visited the president. 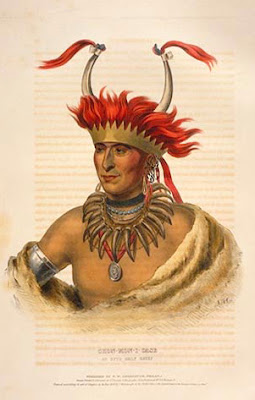 The portrait of Shaumonekusse was one of the first prints produced for the McKenney History, some time around 1830. As the production of the History ran its convoluted way towards completion in 1844, a number of portraits, including this one, were redrawn on stone and reissued. Usually the later images were a bit more “polished” or Europeanized, as can be seen by comparing the image above the previous paragraph, published in 1836 by E.C. Biddle, with the one just above, published in 1838 by F.W. Greenough.
Posted by Chris Lane at 3:35 PM