I will use “novelty prints” to refer to prints that are not intended to present a straight-forward picture, but that are unusual in the way they were intended to be used or viewed. This includes perspective views (already written about in another blog), multi-view prints, and (to quote Richard Balzar) “magic lanterns, peepshows, shadows, transparencies, thaumatropes, phenakistascopes and a variety of other optical toys.” These prints have some “trick” or special character that lets them be viewed or used in a novel way. Novelty prints have a long history but are quite rare and not a whole lot is written about them. Richard Balzar, who I just quoted, has a huge collection of such prints and I will post an interview with him later this month, but today I will discuss one type of novelty prints which I find particularly interesting. 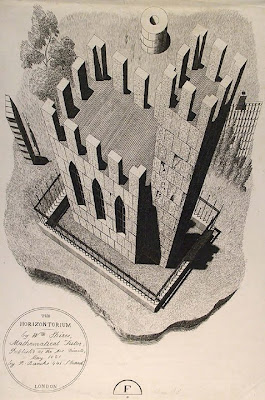 One of my favorite novelty prints is an unusual perspective view of a Philadelphia building which goes by the title of “Horizontorium.” A horizontorium is a type of print which, according to a letter published in Mechanics’ Magazine on March 28, 1835, was invented in 1821 by a British mathematical tutor named William Shires. According to Shires, his invention (illustrated above) was very much in demand throughout Europe and it was soon copied by others, who claimed the invention for themselves.

Though it looks exceedingly strange, according to Shires, “The horizontorium has nothing beyond common about it, the only peculiarity being that the view is projected on a horizontal plane, in lieu of a vertical one.” Shires' print shows a crenelated tower which appears to be misshapen, but which takes on its normal perspective when viewed from a particular angle. One was supposed to view the print by keeping the paper on a horizontal plane and looking at it with one eye from a position just above the spot marked at the bottom of the print. This can be facilitated by the cut-out eye piece shown above, which can be placed in the correct spot, and then the viewer looks through the eye hole. 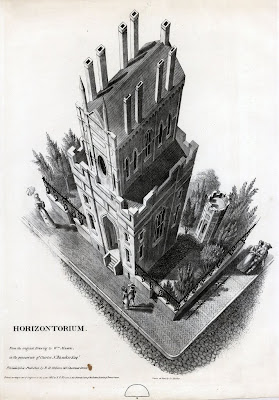 Shires was probably spurred to write his letter of 1835—which was reprinted in the Journal of the Franklin Institute that same year—by the appearance of copy-cat horizontoriums. One of these was published in Philadelphia in 1832. This print is also entitled “Horizontorium” and it is the only known American example of this type of print. 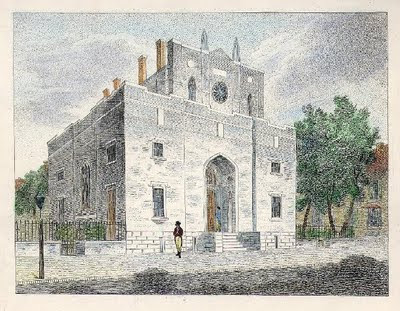 This print was drawn by William Mason, a local artist who specialized in Philadelphia architectural prints. It shows the Philadelphia Bank building, which was designed by Benjamin Latrobe and stood at the corner of Fourth and Chestnut from 1808 until 1836. There were only two prints done of the Philadelphia Bank (which was the first Gothic Revival building in Philadelphia), the other being a print by William Birch published in 1809. It is fascinating to compare this view, which shows a rather squat building, to Mason's image, which makes the bank seem almost a skyscraper.
Posted by Chris Lane at 6:00 AM