I am sitting in a hotel room in Billings, Montana, just about to head off for the appraisers meeting for the second stop on this summer's Antiques Roadshow tour. Earlier this month, my partner Don Cresswell went to San Diego for the first stop. He saw the usual mix of good and bad items and was taped with a terrific map. I hope you will all be able to see this taping when the 2011 Antiques Roadshow series runs, beginning next January.

I arrived in Billings yesterday and was able to visit the Battlefield of Little Bighorn, which was quite a fascinating and moving experience. It was exciting and enlightening to see the actual site and get a good idea of the actual events (the National Park Service does a terrific job with exhibits and signs, etc.) of this legendary episode in the sad history of the relationship between the United States and Native Americans.

This battle was almost immediately obscured by myths that developed around Custer and the events which transpired exactly 134 years ago today. Part of the myth making, of course, came through the propagation of prints of the battle. As I have written a number of times in this blog, the relationship between actual events and the way they are depicted in prints, as well as the impact that prints have on history are subject that I am particularly interested in. I plan to write a blog soon on the subject of printed images of the Battle of Little Big Horn. 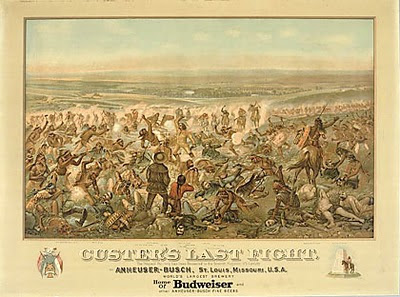 On that subject, there is one print, or more specifically a series of prints, of the battle which are more common and had more influence than any other. Those are the prints that were issued by Anheuser-Busch as advertisements for Budweiser beer. I would be very surprised if any reader of this blog has not seen this famous image somewhere, even if not one of the original prints. The print was first issued in 1896 but was revised and continued to be used to as late as 1962. The earlier examples have quite a bit of value, whereas the later ones do not. This is one print I would love to see come in tomorrow at the Roadshow, for it has a very interesting history and is graphically terrific.

So what else might come in for me to see tomorrow? As I wrote last year, I enjoy trying to guess what I might see. Even though Billings is quite a small city and not surrounded by a very large population base, I could see some unusual things. I would expect I might see some good folding maps, as these were often used by those who traveled out to this part of the world in the second half of the nineteenth century. There might be some interesting views of western settlements or perhaps nearby Yellowstone, such as the great series of prints by Thomas Moran. 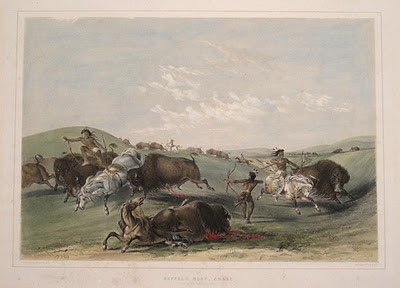 There also could be some good western art. Most of what we think of as "western art" is more recent than the 19th century. At that time, the west was not as glamorous as it later came to be; it was a rough and dirty and primitive life out here and not many of the general public wanted images of that life nor were there many artists out here making prints of it. There are some good prints done, however, and I hope I might get to see a print by some of the work of, say, Karl Bodmer or George Catlin.

I'll write up a report of my experience next week and with luck you'll get to see one treasure that comes in when the 2011 season runs...
Posted by Chris Lane at 4:57 PM