Putting on Hairs: A political print and Lincoln's beard

On February 16, 1861, Lincoln's train stopped at Westfield, N.Y. on the way from his home in Springfield, Illinois to his inauguration in Washington, D.C. During his remarks to the crowd that had gathered, Lincoln mentioned that he had received a letter from a young girl who lived in Westfield and asked to meet her. This letter was written during the presidential race the prior autumn by 11 year old Grace Bedell. 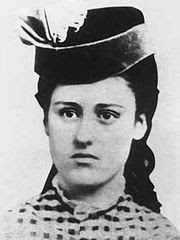 Hon A B Lincoln
Dear Sir

My father has just home from the fair and brought home your picture and Mr. Hamlin's. I am a little girl only eleven years old, but want you should be President of the United States very much so I hope you wont think me very bold to write to such a great man as you are. Have you any little girls about as large as I am if so give them my love and tell her to write to me if you cannot answer this letter. I have got 4 brother's and part of them will vote for you any way and if you will let your whiskers grow I will try and get the rest of them to vote for you you would look a great deal better for your face is so thin. All the ladies like whiskers and they would tease their husband's to vote for you and then you would be President. My father is a going to vote for you and if I was a man I would vote for you to but I will try and get every one to vote for you that I can I think that rail fence around your picture makes it look very pretty I have got a little baby sister she is nine weeks old and is just as cunning as can be. When you direct your letter dir[e]ct to Grace Bedell Westfield Chatauque County New York

Lincoln was obviously touched by the letter and replied just a few days later: 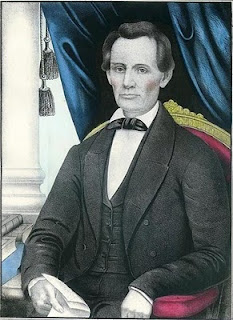 Your very agreeable letter of the 15th. is received.

I regret the necessity of saying I have no daughters. I have three sons -- one seventeen, one nine, and one seven, years of age. They, with their mother, constitute my whole family.

As to the whiskers, having never worn any, do you not think people would call it a piece of silly affection if I were to begin it now? Your very sincere well-wisher

Despite his demurring to her suggestion, within a few weeks Lincoln began to grow a beard. While Grace's letter was likely not the sole reason Lincoln decided to become bewhiskered, it seems likely that it had some influence on this decision. What is interesting to me is that Grace was prompted to write her letter after viewing "[Lincoln's] picture and Mr. Hamlin's" which her father had acquired at the Chautauqua County fair. 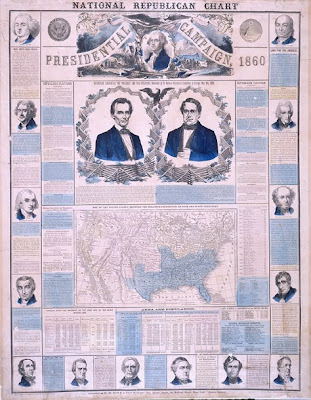 It has been determined that the print which spurred Grace to write to Lincoln was H.H. Loyd's "National Republican Chart. Presidential Campaign 1860." This is an 3' x 2' hand-colored wood engraving which included the Republican platform, quotes from Lincoln's speeches, demographics, a map of the United States, and portraits of the first fifteen presidents. In the pride of place are portraits of Lincoln and his running mate Hannibal Hamlin, each surrounded by a rail fence. Grace liked the fence ("I think that rail fence around your picture makes it look very pretty.") but obviously thought the portrait of Lincoln with his almost cadaverous face indicated he needed a cosmetic makeover.

What is cool about this is here is an example where a popular print seems to have had a significant impact on history, even if only on a presidential coiffure. And even if Grace's letter had only a tangential impact on Lincoln's decision, certainly this episode is a nice example of how popular prints had a great impact on the general population. As Holzer, Boritt and Neely state in The Lincoln Image, this is "indicative of the importance such images held for the picture-hungry society of the 1860s" (p. 73)
Posted by Chris Lane at 8:00 AM

Labels: Impact of prints on history