In early 2002, I received a call from the Associated Press about a “$2 million print.” A couple from Florida had somehow come to believe that an historical print from 1846, showing the proposed Washington Monument, was worth $2 million dollars. There are a fair number of American prints that sell in the five figure range, and very few that sell in the six figure range, but no single American historical print I can think of that would sell for over a million dollars; certainly not a print showing the Washington Monument. As I told the AP reporter, for me the interesting story here was not that a $2 million print was found, but that the couple believed it was worth $2 million. 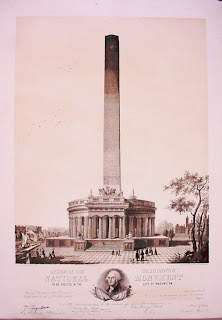 The print in question is, without doubt, an interesting one. Charles Fenderich was an important American lithographic artist whose portraits of American statesmen in 1830s and 40s are of particular note. According to Alice Lee Parker and Milt Kaplan’s Library of Congress catalog, Charles Fenderich. Lithographer of American Statesmen (1959; p.59f.), around 1846 Fenderich issued at least three folio variants of an image of the proposed of the Washington Monument as designed by Robert Mills.

The Washington National Monument Society was organized in 1833 with the goal of erecting a monument to George Washington. The society’s fundraising campaign had elicited $87,000 by the time construction on the monument began on July 4, 1848. One of the ways the society raised money was by selling prints made by Charles Fenderich showing Mills’ design.

The purported $2 million print is one of the prints created for the fundraising campaign, and the particular example in question is an unusual variant. The name of the city is misspelled in the caption, where it states that the monument was “to be erected in the City of Wasihngton.” The owners felt that this example of Fenderich’s print, with the misspelling, was unique, and based on that they claimed it is worth $2 million.

At the time, we had never come across this particular variant, but having some fair experience with the nature of nineteenth century printmaking, we doubted that this was a unique example. Then subsequently, we have come across two examples of this print (one of which we currently have in our shop) with the same misspelling. Indeed, as this error had not previously been documented, it is even possible that every example of this print has the misspelling, just that no one noticed. The fact that this print is listed in some references (for instance in Parker & Kaplan’s catalog) with the right spelling might simply be because the authors didn’t look for the error.

So, the print in question was not unique, but even if it was, would that make it worth $2 million? While there are no set prices for antique prints, I cannot imagine even the most high priced dealer nor the most high-powered auction house selling this print for over five figures, much less over six figures. Stamps and coins with mistakes do sometimes have extraordinary values, but these are official, Government-made items. Mistakes on privately-made prints do not create anywhere near the same increase in value. There are mistakes on prints all the time, some corrected and some not. It is inevitable that with private businesses producing prints such mistakes will happen (remember that text is written in reverse on the lithographic stone), and while these mistakes do create extra interest, any increase in value is marginal. And as discussed in an earlier post, the print’s purported scarcity (we know now that at least three examples exist and there are almost certainly more) would add some value, but not anything like what the owners hoped.

Taking all factors into account (Fenderich’s importance, the subject matter, the mistaken spelling, and the print’s scarcity), we have listed the print for sale at $2,400. So how did the owners of the print in question come up with a value almost a thousand times greater? And what are we to think of the related story that an antique dealer offered the couple $30,000 for the print, that they had invested about $8,000 in conservation and research, and that they had an appraisal of the print for well over $1 million?

It turns out the story has a longer history than at first appeared. The story did not break with the AP article in early 2002, for in the News Herald of July 18, 2001 an article about this print had appeared, though with some differences. In that article, the owners gave an appraised value of “between $1.45 and $2 million,” and then they said they had invested $5,000 in conservation and research, of which conservation was “only a small part.” I think the increase in the numbers given in the AP article hints that these values are perhaps more wishful than actual.

Would any antique dealer offer $30,000 for this print? Unlikely. If conservation is only a small part of the $5,000-$8,000 spent by the owners, how did they spend all that money on research? Doesn’t it make more sense that the figure quoted is chimerical, created to impress the news media rather than to reflect actual money spent? And did the owners really get an appraisal of the magnitude they are quoting? Who, with any knowledge of American prints, would give such figures? That these numbers were generated out of self-delusion, a desire for self-promotion, or simply wishful thinking is more likely than any other explanation.

Some American prints are beginning to bring big dollars (Audubon and Currier & Ives come to mind), and stories of huge prices realized for “found” antiques are talked about by everyone interested in antiques (the lost Declaration of Independence printing and the famous Antique Roadshow table are good examples). The story of this $2 million print seems like a classic case of someone’s hopes of hitting it rich overwhelming better judgement. Whether the owners have received bad “expert” advice or have built their story on their own dreams, this story is a sorry one. It’s an interesting print, but a sad story.
Posted by Chris Lane at 10:53 AM