The Zeno Map: mythical islands of the North Atlantic 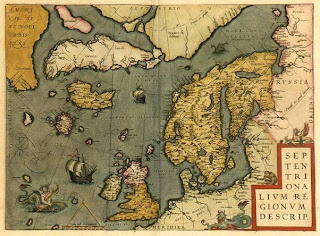 In 1558, Nicolo Zeno (1515-1565) published De I Commentarii del Viaggio, which purported to be the story of the travels of Nicolo and Antonio Zeno, ancestors of the publisher, based on a fragmentary document that had come down in the family. The account told how in the late fourteenth century the Zeno brothers had sailed, in the employ of Henry Sinclair, the Earl of Orkney, to Iceland, Greenland and elsewhere in the North Atlantic. Two islands they supposedly visited were Frisland (on the way to Greenland) and then Icaria (somewhere past Greenland). Also, purportedly, they had heard a report by a fisherman that he had visited lands to the west of Greenland, called Estotiland and Drogeo, and the Zenos may have sailed in search of these lands.

The account was accompanied by a map showing these islands/lands and it caused something of a sensation when it was published. Today there is debate as to whether the brothers made some or any of the alleged voyages, but the consensus is that the account was wholly fabricated by Nicolo in order to try to prove that it was his Venetian ancestors, not the Genoese Columbus, who had first landed in the New World. Though a fictional tale, the story and particularly the map had a great impact in the subsequent mapping of the Northern Atlantic. 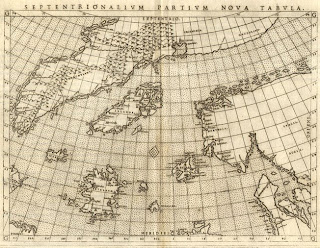 In 1561, shortly after Zeno’s original publication, Girolamo Ruscelli issued a version of the Zeno map, showing all these fabricated places. The non-existent islands of Frisland and Icaria are shown just below Iceland, and further to the south are Estotiland and Deogeo. These latter are drawn running to the edge of the map, indicating that they might be part of the North American continent. [Click here to see labeled image of the Ruscelli Zeno map] The geography of the Zeno map was picked up by other important cartographers, including Gerard Mercator and Abraham Ortelius. The former showed these fictional lands on his great world map of 1569 and even included an inset map of the non-existent Frisland on his map of the North Pole (cf. images below), while Ortelius produced a map of the North Sea that was a somewhat augmented version of the Zeno map (cf. image at top of blog). With these two heavy-weights lending their authority to the Zeno myth, it is not surprising that this geography persisted for some time before it was taken off the map. 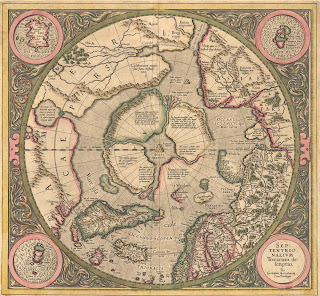 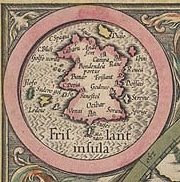 It is a very interesting case study to see how the Zeno myth had subsequent impact on future exploration and mapping. In 1576, Martin Frobisher, looking for the Northwest Passage, sailed to Iceland, then Greenland, and then up into the Labrador Sea, finally reaching what is now Frobisher Bay in Baffin Island. The problem was that Frobisher was looking at a map based on Mercator’s 1569 cartography, which included the non-existent Frisland, and thus Frobisher didn’t realize where he was. When he had arrived at Greenland, he looked at his map and figured he had landed on Frisland (he actually claimed Frisland for Queen Elizabeth!), and so when he got to Baffin Island he figured he was at Greenland. So, his report of what he saw on Baffin Island was ascribed by mapmakers to Greenland. 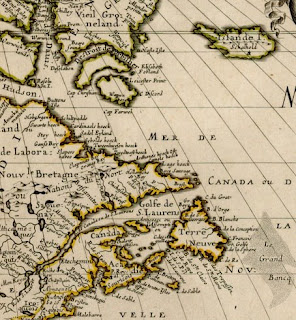 The confusion went further, however, for when Frobisher sailed into what is now Frobisher Bay, he thought he was sailing into a strait, not a bay. Thus, after Frobisher returned with the report of his exploration, mapmakers put a strait (not the correct bay) at the end of Greenland (not correctly on Baffin Island). So here we have one cartographic myth, Frisland, creating another such myth, Frobisher’s Strait at the tip of Greenland!
Posted by Chris Lane at 7:00 AM