Looking for a way to the Orient For Europeans, the “Orient” had long been the source for highly desired and very scarce goods, such as silk and spices. Trade with China and “the Indies” was the font of vast wealth for those who controlled even part of that trade, for instance the cities of Venice and Genoa in the medieval period. Eastern goods arrived in Europe via the Middle East along the Silk Road. In 1453, Europeans received a mighty jolt when the Ottoman Turks captured Constantinople and essentially cut off this trade. 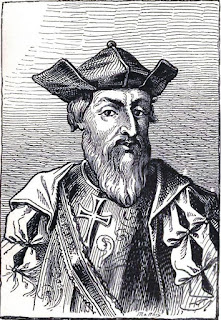 This led to an urgent search for a new route to the Orient—-by water rather than land-—which was led initially by the Portuguese, whose Henry the Navigator sent explorers down the African coast beginning the early fifteenth century both to build Portuguese trade in that continent, but also to find a sea route to Asia. These voyages culminated in Vasco da Gama’s 1497-98 expedition which rounded the Cape of Good Hope and was the first to reach India by sea.

Contrary to a common misconception, most Europeans in the fifteenth century knew that the earth was spherical, which would mean that the “Orient” could be reached not only by sailing east, but also by heading in the opposite direction. However, most Europeans also thought that the earth was considerably smaller than it is. When this was combined with the mistaken belief that Eurasia was considerably wider than it is, this led to the erroneous conclusion that the east coast of Asia would be only about three thousand miles west of Europe (the actual distance is about 12,000 miles). 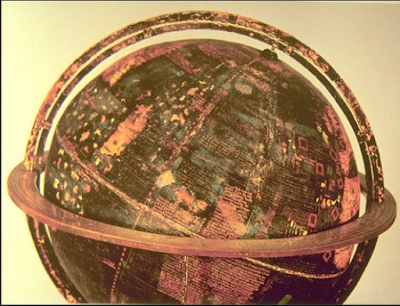 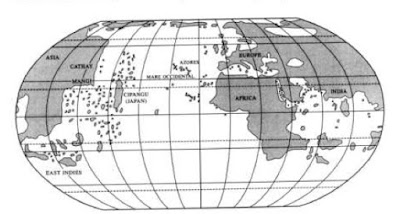 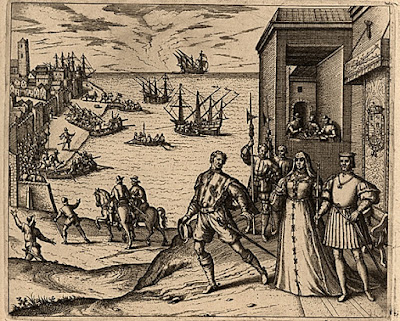 The difficulty and length of the sea voyage to the Orient around Africa, led Florentine philosopher Paolo Toscanelli to suggest in 1474 that there were several advantages to sailing westward to Asia rather than eastward. One of the main proponents of this concept was Christopher Columbus, who spent years trying to get backing from the Portuguese, Venetians, English and Spanish for his plan to sail west to the Orient. Finally, in 1492, King Ferdinand and Queen Isabella of Spain agreed to sponsor what would become Columbus’ epic voyage to the “New World.”

Columbus, of course, was looking for Asia (which he died thinking he had discovered), but the promised riches never appeared and it soon became obvious that the newly discovered lands were not the hoped for Orient. Initially these lands, which came to be known as the Americas, appeared to be conspicuously lacking in riches and so they were considered to be mere roadblocks on what was a hoped for, soon to be discovered, sea route to Cathay and the Indies. 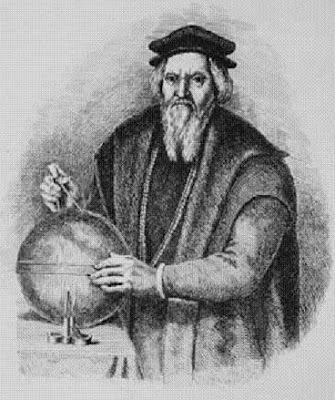 Columbus was soon followed in this quest by John Cabot, who in 1496 set off from England, with a commission from Henry VII to explore to the west of the British Isles, again seeking to find a way to the Orient and hoping the narrower degrees of longitude would make the voyage a bit shorter. Leading a number of expeditions, Cabot did reach America, but found no evidence of any way to Asia. The English did not give up on their search for a water route to the Orient, but their efforts soon turned to looking for a Northwest Passage around the northern end of the continent, efforts which proved fruitless. 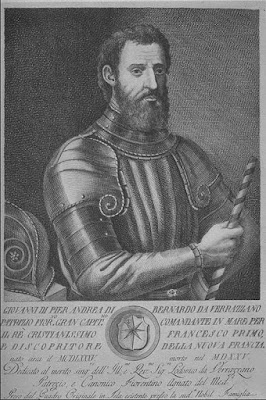 Further south, a number of voyages were sent out in the early sixteenth century to probe north and south of initial landfalls in the West Indies, expeditions which found that a very large landmass (South America) blocked any practical route to the south (Magellan’s voyage finally rounded that continent in 1520) and that the Gulf of Mexico blocked any route directly to the west. In 1524, Giovanni da Verrazzano set out to explore, for King Francis of France, the area lying between Florida and Terranova, looking for a way around the blocking lands further to the north. 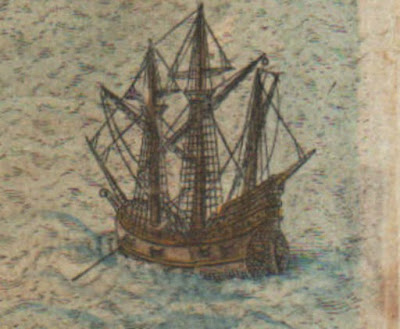 From March to June, Verrazzano sailed from the northern part of today’s Florida to Newfoundland, making many discoveries, such as New York and Narragansett Bays. The ships of the day could not point close to the wind at all, so Verrazzano could not sail right up the coast, but had to beat out to sea and then back in towards land, meaning he saw only a series of discontinuous sections of the North American coast. This explains why Verrazzano missed discovering both the Chesapeake and Delaware bays.

Early in this voyage of discovery, Verrazzano came upon one of the barrier islands of North Carolina. He did not see any of the gaps between the islands, but did see what looked to be a vast body of water across what he took to be an isthmus of land. As the whole point of his exploration was to find a route past the Americas, the Pacific Ocean stayed always in the front of Verrazzano’s mind, and this caused him to jump to the conclusion that that body of water was the ocean. As he wrote in a letter to King Francis:

We called it Annunciato from the day of arrival, where was found an isthmus a mile in width and about 200 long, in which from the ship, was seen the oriental sea between the west [corrected from ‘east’ in the text] and north. Which is the one, without doubt, which goes about the extremity of India, China and Cathay. We navigated along the said isthmus with the continual hope of finding some strait or true promontory at which the land would end toward the north in order to be able to penetrate to those blessed shores of Cathay.” 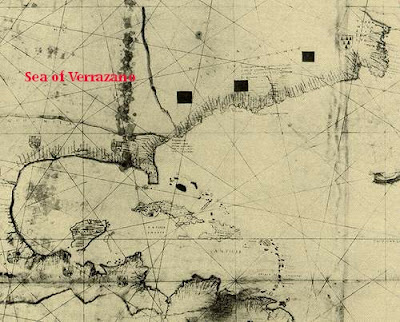 As a result of Verrazzano’s report, this concept—-that somewhere along today’s American southeastern coast, there was an arm of the Pacific Ocean separated from the Atlantic only by a narrow isthmus—-entered into the European understanding of the region, for what better source could there be than a first-hand report? This hypothesis was reinforced by a manuscript map drawn by Verrazano’s brother, Girolamo, which showing this “Sea of Verrazzano” in graphic fashion. 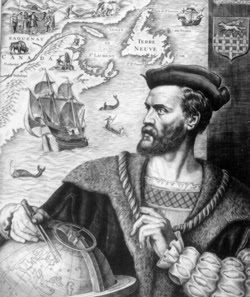 Though this Sea of Verrazzano seemed like it might prove to be a good route to the Orient, the French subsequently turned their eyes further north. In 1534, Jacques Cartier received a commission from King Francis to sail west to “discover certain islands and lands where it is said that a great quantity of gold and other precious things are to be found,” that is, find the route to China and the Indies. Cartier explored Newfoundland and the shores of the Gulf of St. Lawrence, and on a second expedition the following year, he sailed down the St. Lawrence River as far as rapids at today’s Montreal. Though he went no further, Cartier was convinced that the St. Lawrence was the waterway which would lead to the Pacific, with the rapids being the only thing stopping him from sailing right to the Orient.

It is ironic that over a century later these rapids were named “Lachine”—that is La Chine, or China. It seems that in 1669, Robert Cavelier de La Salle set off from this location on an expedition to seek the still sought-for route to China. After about a thousand miles of travel in the interior of the country, with no likely route in sight, about two dozen of La Salle’s men deserted, arriving back at their starting point three or four months after starting out. Supposedly the amused locals thus gave the rapids the ironic name of “La Chine.”

Turning back to the Sea of Verrazano, the first attempts to establish a colony in the American southeast was by the English, who in 1585 attempted to establish a “Virginia” colony in order to mine for gold and silver, harass the Spanish and look for the route to the Pacific Ocean still believed to lie close at hand in the area. This colony failed, but in 1606, King James gave a charter for another attempt, and this resulted in the settlement of Jamestown, the first permanent English colony in America. 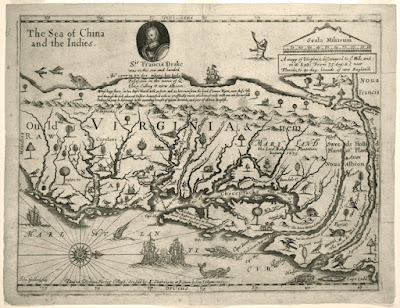 The supposed close proximity of the Pacific Ocean was brought into question as the colonist explored the Chesapeake and its rivers, but the belief was not killed. Part of the instructions for the new colonist was to seek out a river by which “you shall soonest find the other sea,” that is the Pacific, and they believed that while not right at hand, it wasn’t that far distant. This is delightfully demonstrated by John Farrer’s map of Virginia from 1651. Farrer was a member of the Royal Company of Virginia and his map shows the colony with a western orientation, the mid-Atlantic coast running along the bottom edge.

At the top is of the map is “The Sea of China and the Indies,” which not only looks to be very close to the Atlantic coast, but is so indicated in a legend which states that its “happy shores” are “within ten days march...from the head of the James River.” An alternative, water route is shown with the source of the Hudson River separated only by a narrow land bridge from a river which flowed directly into the Pacific.

Further exploration by English and French colonists demonstrated that the Pacific Ocean was not near at hand. By the end of the seventeenth century, while there was still hope of finding a practical water route to the Orient, it was realized that it would no longer be by way of a river or body of water which originated near the east coast. Searches for a route to the Orient continued, but they started thereafter from the Great Lakes, not from the Atlantic Ocean.

[ Go to next blog in this series ]

[Go to video about the False Sea of Verrazzano]

Posted by Chris Lane at 6:13 PM No comments: