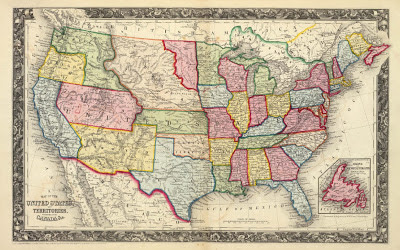 As discussed in the previous Shaping the Trans-Mississippi West blog, the 1850s saw the division of the American West into slightly smaller, though still large territories. This was a period when many Americans were heading across the West to Oregon and California, but also when some of these emigrants from the East were settling in the wide open spaces between the West Coast and the Mississippi River. Then at the end of the decade new gold and silver discoveries brought in even more settlers, who very soon began to agitate for territories of their own.

Thus, as the decade of the 1850s came to a close, there was great pressure to create new, smaller territories in certain areas of the American West. The New York Times reported on Jan. 11, 1859 that there were six applications for new territories before Congress. Five of these were for trans-Mississippi regions: one was for the creation of Arizona “out of the southern half of New-Mexico,” one for Dakota from the eastern part of Nebraska, one for Laramie from the southwestern part of Nebraska, and then two for mineral-rush related territories, Colona and Nevada, to be formed out of the western parts of Kansas and Utah, respectively.

Some version of four of these proposed territories were created within five years, though most with different borders and in one case with a different name. The citizens who proposed the creation of Laramie, which would have been somewhat similar to the eventual Wyoming Territory, did not get their territory for almost a decade.

Despite these, and other petitions for territorial creation, Congress did not act. The reason was, not surprisingly, the simmering issue of slavery. With a roughly equal balance in Congress between the free and slave states, neither side was willing to let in a new territory which would lead to one side gaining a numerical advantage. Thus as the 1860s began, no new territories had been created since the Kansas-Nebraska act of 1854.

This changed suddenly, beginning in December 1860, when eleven slave states declared that they were seceding from the United States, whereupon their representative left the U.S. Congress. All of a sudden, the Northern states controlled Congress and could create territories as they wished. Within the first three months of 1861, three new (free soil) territories were created and Kansas had become a new (free soil) state. 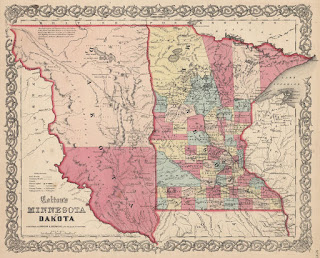 The Dakota Territory mentioned in New York Times article was created out of Nebraska, but not as originally suggested. When Minnesota had become a state in 1858, created out of the eastern part of the Minnesota Territory, the rest of old territory became officially unorganized. It was often called Dakota, and a provisional government was set up, but it had no formal status. 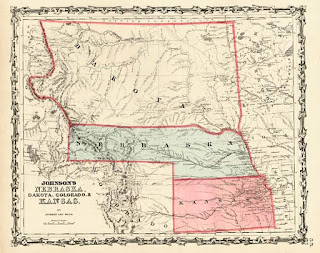 In 1861, Dakota Territory was created, but much expanded. It encompassed the western part of the old Minnesota Territory, which had been bordered on the west by the Missouri River, but it now extended all the way to the continental divide, adding on all of the Nebraska Territory north of the 43rd parallel. Newly created, and very sparsely settled, Dakota was now the largest territory in the country. 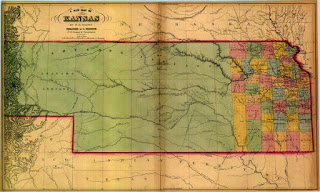 About the same time, Nebraska lost not only all the land north of 43°, but also a bit of its southwestern corner to another new territory, Colorado. (At the same time, though, Nebraska did gain a bit of land from the extreme eastern part of Washington Territory.) The New York Times article mentioned that there was a proposal for a new territory of Colona. This was spurred by the gold seekers who had poured into the foothills of the Rockies as part of the Pikes Peak Gold Rush of 1858-59. This region mostly lay in the western part of an very wide territory of Kansas. The new settlers in Denver City and nearby communities felt far away from the Kansas government well to the east and wanted their own, more local government. 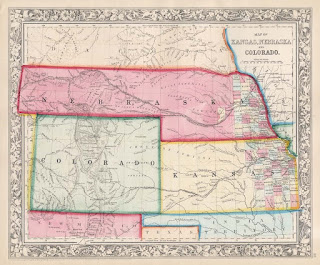 A petition was sent to Congress by one group to create Colona, and shortly thereafter another group petitioned for the creation of a similar territory to be named Jefferson. When Congress was finally able to act after the secession of the Confederate states, southern names were definitely out of favor, so the new territory came in named as Colorado. It was created out of the western part of Kansas (the eastern part of Kansas Territory having just been accepted as the new state of Kansas), the southwestern part of Nebraska, the northeastern part of New Mexico, and a chunk out of the part of Utah east of 109° longitude.

This was the first part of a long series of instances where the Utah Territory had its borders shrunk down. Utah was dominated by the Mormons and there was definitely an anti-Mormon prejudice in Congress in the 1850s and 60s. Not only was there the Mormon War of 1857-58, but there was a general suspicion of the religion and a strong anti-polygamy feeling in Congress. Thus there was little hesitation in taking land away from Utah whenever it was convenient, as we will see several more times in the future. 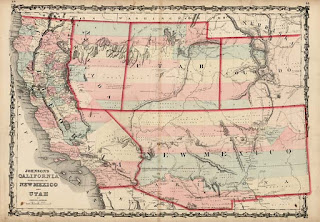 In 1861, Utah lost not only a large chunk of its eastern territory, but also all the land to the west of 116° longitude. This was used to create another mineral-rush territory, Nevada. About the same time gold was discovered in the “Pikes Peak” region, the great Comstock silver lode was discovered, leading to a huge influx in prospectors to the eastern slopes of the Sierra Nevada Mountains in western Utah. Similarly to the Pikes Peakers, those in the Comstock region wanted their own territory. This suited Congress fine, as they could diminish the power of the Mormons in Utah and at the same time get more control of the new mineral wealth in the Nevada, the third new territory created in 1861.

There was one other territory which made its appearance in 1861, at least according to some: Arizona. This territory had its genesis in the vast size and character of New Mexico. This territory had its capital in Santa Fe, which was located in the northeastern part of the territory, a region settled mostly by an Hispanic population. In 1854, the Gadsden purchase had added almost 30,000 square miles of land in the south to New Mexico, a region into which settlers from Texas and elsewhere in the American south moved into in the 1850s.

The settlers in this southern part of New Mexico--called either “Gadsdonia” or “Arizona”--strongly felt they needed a local government. Not only were they separated by distance and difficult-to-traverse terrain from Santa Fe, but they were separated by culture and beliefs from the New Mexican government. In 1856 conventions were held in Tucson and Mesilla calling for a new territory to be created from the southern part of New Mexico. The U.S. Congress, however, deemed that the population was still too small to create a new territory. 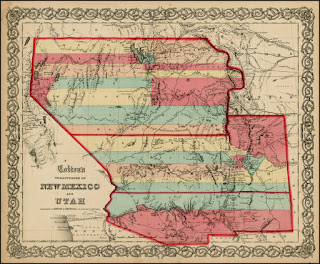 The dissatisfaction of those in the south continued and it only increased as large numbers of new settlers poured in after gold was discovered along the Gila River in 1858. In July 1860, another convention was held in Tucson, which drafted a constitution for a “Territory of Arizona,” to be organized out of New Mexico Territory south of the 34th parallel. The convention elected a territorial governor, Lewis Owings, and sent a delegate to Congress.

This time Congress refused to accept the new territory because of the slavery issue. Many of those in the proposed new territory were pro-slavery, with business connections with the southern states, and this new territory lay below the old Missouri Compromise line of demarcation between slave and free states. Thus anti-slavery Congressmen were convinced the new territory would eventually become a slave state, something they were keen to avoid. 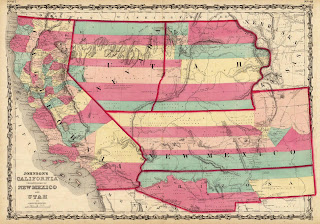 When the Confederacy was created in February, 1861, Arizonians finally saw a new opportunity to create their own territory, so a convention was held in Mesilla, which voted on March 16, 1861, to secede from the Union and petition to join the Confederate States. These eastern Arizonians asked those to the west join them, resulting in a convention, held in Tucson, where the westerners voted, on March 28, 1861, to join those in the east in forming the new, secession territory. Owings was again selected as governor, but things didn’t any proceed further for a few months.

That summer, Col. John Robert Baylor, from Texas, moved his troops into the area to support the Arizonians’ cause. He fought and won the Battle of Mesilla and then on August 1, 1861, declared the creation on the Confederate Territory of Arizona. This act was authorized by the Confederate Congress on January 13, 1862, and then officially recognized when President Jefferson Davis signed the proclamation on February 14, 1862.

The initial victories and political success of the Arizonians lasted only a short time. In March, 1861, at the Battle of Glorieta Pass—-just southeast of Santa Fe—-a Confederate army was victorious on the field, but their supply train was destroyed and it soon became clear that it was militarily and logistically impractical to try to maintain their forces in New Mexico and Arizona. Thus by July 1861, the Confederate troops had retreated to Texas and the Arizona territorial government set up shop in El Paso. The Confederacy never again wielded any control within the borders of its purported territory of Arizona, but still the territory continued to be represented in the Confederate Congress and troops fought under its banner until the end of the Civil War.

The political fall-out for the American west from the absence of Southerners in Congress continued in the years after 1861, as we will see in the following blog in this series.

Posted by Chris Lane at 6:15 PM No comments: