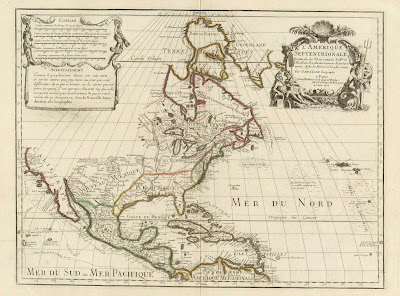 Guillaume Delisle’s map of North America from 1700 left the area to the west of the Great Lakes blank, demonstrating that the French really didn’t know what was going on in that region. However, this doesn’t mean that there weren’t theories of what might be there, including some considered by Delisle himself.

Sea of the West

From 1695 to about 1700, Guilluame and his father Claude drew a series of manuscript maps of that region which include a large “Mer de l’Ouest,” that is, a “Sea of the West.” This Sea of the West is a distant cousin of the Sea of Verrazano, though as Delisle noted it was based on a number of Indian reports recorded by the French in the second half of the seventeenth century. A viable path to the Pacific had been a focus of the French from the beginning of New France, so they were always questioning Indians they met about possible water routes to the west. Communication was, of course, imperfect, and probably neither party really understood what the other said, with the French always interpreting what they heard in light of their pre-existing notions.

The French understood the Indians tales as indicating that there was a large body of water not too far to the west, which could be reached by river and which would provide access to the Pacific. In the Jesuit Relations of 1659-60 there is the report of a sea lying just ten days journey to the westward of the Great Lakes, and this sea was mentioned in other Indian reports recorded in the Relations in the following years. These reports claimed that the Indians mentioned various characteristics of this sea—-such as having tides and with Europeans living along it—-which indicated that the sea was connected to the Pacific.

Later in the century, French explorers in the western parts of New France heard similar tales. For instance, in 1685 Daniel Greyselon, Sieur Duluth reported hearing from some Indians “that it was only twenty days’ journey from where they were to the discovery of the great lake whose water is not good to drink,” that is a lake of salt water. In 1688, Jacques de Noyon explored the river systems to the northwest of Lake Superior meeting some Assiniboines who, when he enquired about the Western Sea, told him they would take him in the spring to that sea, upon which there was a great city with walls of stone and a race of men who were white and bearded. Noyon did travel with the Indians as far as Lake of the Woods, and there they told him that a river flowed from that lake into the Western Sea.

Besides all these Indian and explorer reports, the possibility of a Sea of the West was supported by a 1625 story by one Juan de Fuca, who said that in 1592 he been sent by the Viceroy of New Spain north along the California coast searching for the “Strait of Anian,” which was the supposed entrance to the passage across the north of America from the Pacific Ocean. Fuca said at between 47 and 48 degrees north he found a bay which he sailed into, thereafter finding a large sea which led further to the east. After sailing for more than twenty days, Fuca thought that he had reached the “North Sea” (that is the Atlantic), thus achieving what he had been sent to do.

Whether Fuca’s tale was a complete fabrication or a confused account of an actual voyage has never been determined for certain. However, there are no archival records of such a voyage, and there is no knowledge of a Spanish ship ever having reached beyond 43° N in that period. Whatever the truth of this tale, it was another “first-hand” account which seemed to indicate the possibility of a large sea to the west of the Great Lakes.

The Fuca tale, along with the Indian & explorer reports enthused the French so much that near the end of the sixteenth century the governor and intendant of New France recommended to the King that they establish posts in the western part of the colony as bases from which to explore for the Western Sea. The Fuca tale, along with the Indian and explorer reports, also stimulated Claude and Guillaume Delisle to consider the possibility of a Sea of the West. 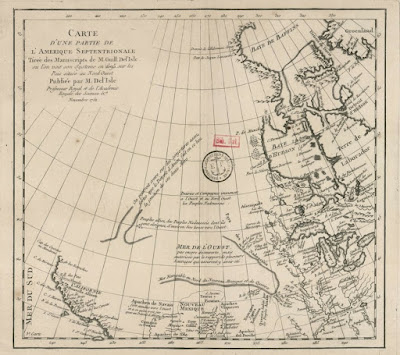 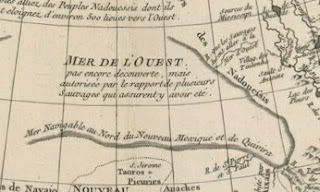 Like all French geographers, they were trying to figure out what was going on beyond New France. By the late sixteenth century, they had a better idea of the width of the continent, so the closeness of the sea mentioned in the Jesuit Relations seemed to give support to the notion that there was an arm of the Pacific extending into the continent. Based on all of this, between 1695 and 1700 the Delisles drew a number of manuscript maps showing a Sea of the West lying between the Great Lakes and the northern coast of California. Interestingly, they must have had doubts about this sea, for it appears on none of Guillaume’s printed maps.

Delisle’s Sea of the West did, however, find a believer in another French cartographer, Jean Baptiste Nolin, who in 1700 produced a double hemisphere world map showing this sea in a form essentially similar to Delisle’s. Delisle claimed that Nolin copied his geography from a manuscript globe he had produced for the Chancellor of France, which did show the Sea of the West. Delisle won his suit in 1706, which forced Nolin to remove any of the “offending geography” from all his coppers plates and also to destroy all copies of the wall map in existence (resulting in the fact that only three copies on the Nolin map are known to have survived). 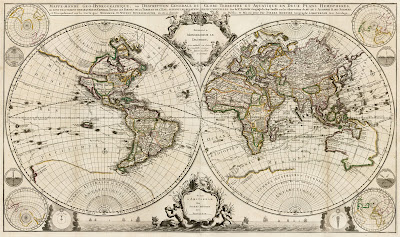 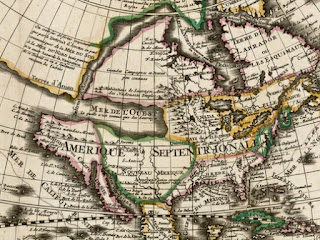 However, the Nolin map had already been copied by Dutch publishers Pierre & David Mortier, and their world map included the Sea of the West depiction. This map was beyond the reach of the French courts so it was circulated in Europe, giving wide distribution to the Sea of the West notion. Besides this, Nolin produced other maps with a smaller, modified Sea of the West, and by these means this non-existent geographic feature appeared on a number of maps in the first half of the eighteenth century.

About the same time as the mythical Sea of the West first appeared, another non-existent body of water was introduced to the geography west of the Mississippi River, this time probably based more on a deliberate falsehood than on mistaken interpretations of Indian reports.

This new myth was of a “Riviére Longue,” perpetrated by Baron Louis de la Hontan. As an officer in the French military, in 1683 Lahontan went to New France and traveled extensively throughout the colony. In 1703, he wrote about his travels in Noueaux Voyages de M. le Baron de Lahontan dans l’Amerique Septentrionale. In that work, Lahontan claimed that during a six month period in 1688, he explored from the Great Lakes to the Mississippi River, going as far south as the Missouri River, then heading north along the Mississippi until he came to this Long River.

Lahontan recounted how there he met a tribe of Mozeemlek Indians, who told him that the Long River arose in some mountains well to the west, and that on the other side of those mountains lay another river flowing westward, which is where they had their home. Furthermore, Lahontan recorded that the Indians stated that that river flowed about 500 miles to the west where it emptied into a great salt lake, about 300 leagues (1,000 miles) in circumference. This geography was boldly illustrated on this map published in the Nouveaux Voyages. 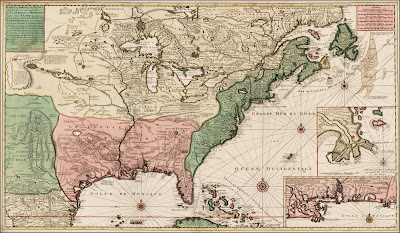 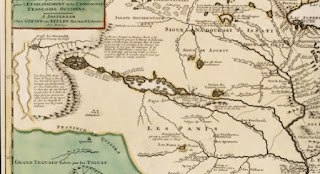 While Lahontan did travel around New France, the consensus is that his tale of the Long River and his meeting with the Mozeemlek was made up. Though it is possible that this episode did occur, in which case the Long River was probably the Missouri, the geography presented in the map is very mistaken. However, a ‘first hand’ report from someone who had explored in the region was not to be dismissed lightly, and Lahontan’s Long River appeared on a number of maps, such as Guillaume Delisle’s Carte du Canada [1703] and Gerard Van Keulen’s Carte de la Nouvelle France [1720].

While the River Long soon passed from the scene—-Delisle never again showed this river--the notion of a river flowing into the Mississippi with its source in some mountains to the west, over which lay a westward flowing river—-a notion introduced by Marquette in the previous century (see previous blog to read about this)—-which emptied into a salt lake or sea, was reinforced by Lahontan’s imaginary geography.

In the beginning of the 18th century, the search for the Western Sea became an important focus for the the French. In 1717, the French Council of the Marine wrote that:

“If the Western sea is discovered, France and the Colony could derive great benefits in trade,... The navigation would be brief, compared with European vessels and subject to far fewer risks and costs, which would provide such great benefit over the trade of that country that no European nation could compete with us.”

The Governor and Intendant of New France recommended to the King that a number of posts be established to the west of the Great Lakes as bases for the search for the Sea, and in 1720, Father Charlevoix was sent out “to proceed to the principal posts of the upper country in order to make inquiries there respecting the Western Sea.” 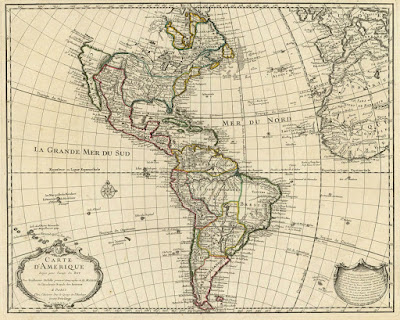 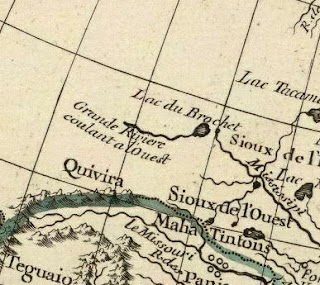 These concepts are shown nicely in our old friend Guillaume Delisle’s map of 1722, which shows a “Grande Rivier coolant a l’Ouest,” probably the first mention specifically of a “River of the West,” which would soon take center stage in the search for the waterway to the Pacific.

Click here to read the next stage in the search for a route to the Pacific.

Posted by Chris Lane at 1:35 PM No comments: