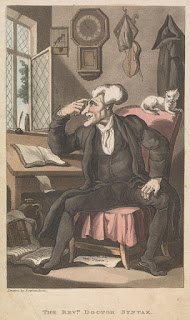 One of my favorite series of British prints are the delightful images drawn by Thomas Rowlandson of the (mis-) adventures of Dr. Syntax. These colorful prints are a delight to the eye and also have a wonderful humor, showing this elderly schoolmaster in various situations that reflect the daily life of early nineteenth century England. So who was this Dr. Syntax and why were these prints made?

Dr. Syntax was a totally fictional character. From 1812 through 1821, a series of volumes were published about the “tours” of Dr. Syntax. The prints were issued along with poems by James Combe, with the always humorous misadventures of the parson Dr. Syntax portrayed both in verse and picture. The story of Dr. Syntax first appeared in Ackermann’s Poetical Magazine from 1809 to 1811, and its popularity resulted in the publication in 1812 of Tour of Dr. Syntax in search of the Pictureque. 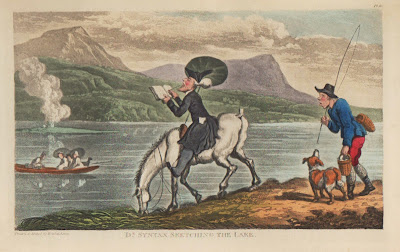 These adventures and illustrations were issued in response to the thousands of early nineteenth-century tourists that swarmed the English countryside in search of the picturesque. Obsessed with finding “natural” beauty, these vacationers often found themselves in very artificial situations. This invited the the tease of Rowlandson’s and Combe’s wit, as they satirized the Reverend William Gilpin’s flowery accounts of his picturesque tours, works very familiar to Britain’s middle and upper classes. In place of Gilpin, the satirists insert stumbling clergyman Dr. Syntax into highly detailed landscapes and interiors. Like all good caricature, they comically twist current events and trends to produce visual jokes that transcend period and place. 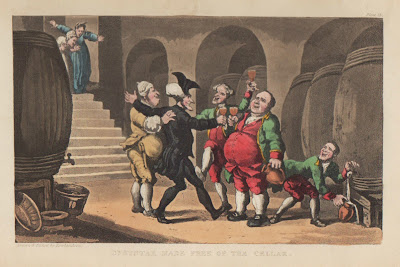 This work got its start through a series of drawings done by Rowlandson showing an elderly clergyman and schoolmaster who traveled during his holidays looking for the picturesque. Rowlandson had offered these to printseller and publisher to Rudolph Ackermann who was just about to begin his Poetical Magazine. Realized that the images would do better with text, Ackermann approached William Combe to provide “poems” to accompany the images. 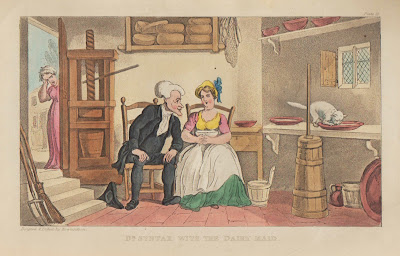 Such was the success of the first volume that two more “tours” appeared, with Dr. Syntax in search of consolation and then of a wife. The process of the production of the tours is interesting, for Combe’s doggerel was always based on Rowlandson’s images. Once a month a new drawing would be furnished to Combe, who would write up an account to match the image. This went on for years and interestingly, Combe wrote that “the artist and the writer [had] no personal communication with, or knowledge of each other”! 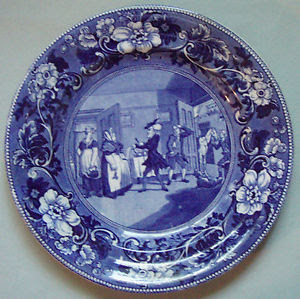 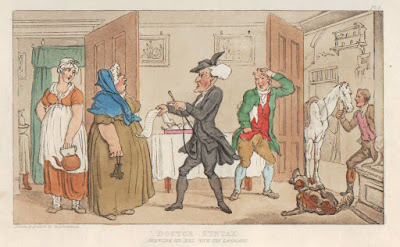 The story and pictures of Dr. Syntax were a huge success, leading to the popularity of “Syntax hats,” “Syntax wigs,” and “Syntax coats.” The Staffordshire china firm of Clews got into the act with a series of plates and other china showing the good doctor. 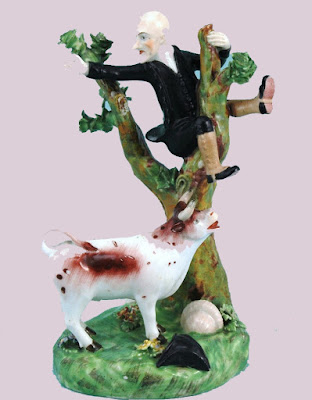 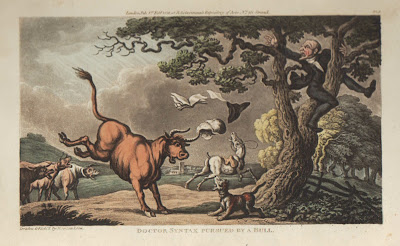 There were also some Staffordshire figures done showing scenes from the series. 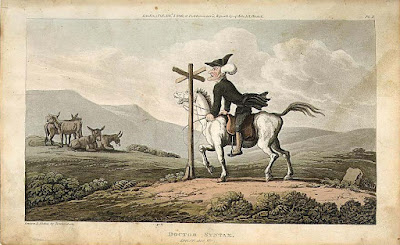 Not only are these prints a delight, but they are still generally available and affordable to collectors today.

Posted by Chris Lane at 4:22 PM No comments: