The Vérendryes search for a route to the Pacific Ocean 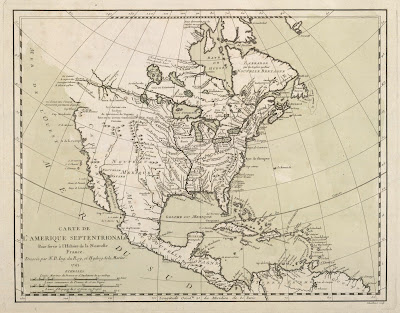 As discussed in the previous blog, the French were very focused on finding a "River of the West", which would provide a water route from the western part of New France to the Pacific Ocean. The search for it became the obsession of a family of French trappers, the patriarch of which was Pierre Gaultier de la Varennes, Le Sieur de la Vérendrye. At his post at Thunder Bay on Lake Superior, Pierre Vérendrye heard from Native Americans of a great river which would lead to the Pacific, and with backing from French Canadian merchants, he and his sons built a series of trading posts to the northwest of Lake Superior as bases from which they could explore for this hoped-for river.

Vérendrye’s initial information on this river came from some maps of the region west of Lake Superior he was given by local Indians, including by a Cree named Auchagach in 1728. Auchagach’s maps showed the system of rivers and lakes which flowed into Lake Superior from the northwest, which were shown as arising in a “River of the West” which started near some Mountains of the Bright Stones, flowed into Lake Winnipegosis and then on to the Lake of the Woods. Vérendrye had Auchagach’s maps copied in manuscript, and one of those was copied by Bellin onto his map of North America from 1743.

Auchagach’s maps were, of their type, quite good, but by the time his water system made it onto Bellin’s map, it was far from reality. Auchagach’s maps had neither orientation nor scale indicated and Bellin erred in both these aspects when he copied them to his map. The actual river systems to the northwest of Lake Superior have a much more Northwest-Southeast orientation than the almost straight West-to-East alignment shown by Bellin, and Bellin shows the river systems as much larger than they are in reality. While Bellin does not show a definite Pacific coast in the west, his River of the West extends very close to wherever that coast would be, presenting what appears to be an easy water route to the Pacific. As good as this looked on Bellin's map, failed French attempts in pursuing this route to the Pacific in the following years soon demonstrated the fallacy of Bellin’s depiction. 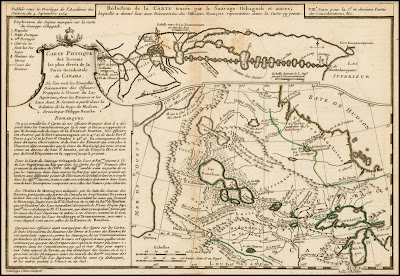 The Vérendrye family influence on the story of the River of the West, however, extended further than this. In 1738, continuing to look for a water route to the Pacific, the Vérendryes traveled west from Lake Winnipeg along the Assiniboine River, then dropped south into what is today North Dakota. There they came to a village of a tribe they called the Mantannes. The sons then visited a village further on which they said was located on the “Riviere des Mantannes.” About this river Pierre later wrote:

“I discovered recently a river flowing to the west... That the river appeared to go, according to the compass, south west by south...the lower part may go to the sea to the south west by west.”

That is, the river may flow to the Pacific Ocean.

According to a scholarly study, the Vérendrye sons had probably visited a Hidatsa village [though the names are similar, the Mantannes were almost certainly not Mandans, as they are often thought to be]. The village was located just south of the conjunction of the Little Knife River with the Missouri, on a part of the Missouri where it looks like the river flows south/southwest. The perceived direction of the river flow, combined with information gathered from conversations with the Indians interpreted through the lens of their hopes, led the Vérendryes to conclude the river might be the much desired River of the West. Philippe Buache included his take on their "discovery" in his 1754 map of western New France shown above.

Interestingly, though by the time it was issued, Buache included another version of Auchagach's map in a panel at the top of the map. This is similar to the one shown on Bellin's map, but by 1754 it was not something that was generally believed by the French. 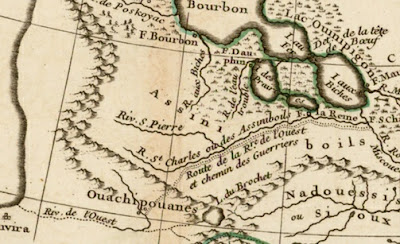 In the main part of the map, Buache shows his take on the Vérendryes' discoveries. The Assiniboine River is shown flowing east-west below Lake Winnipeg, and along its side is a trail labeled as ‘warrior’s route to the River of the West.’ This path crosses a ridge of mountains and comes to an “Ouachipouanes” village (the Cree name for the Mandan), which is located on a river which shortly makes a large bend to the west. Soon after it turns west, this river becomes a dotted line labeled “Riv. de l’Ouest.”

Buache tried to merge this Vérendrye information with previous beliefs, so he has another river, which flows out of a "L. du Brochet," merge with the dotted-line River of the West [this coming from Delisle's 1722 map shown in the previous blog] and this river in turn flows into our old friend the Sea of the West. 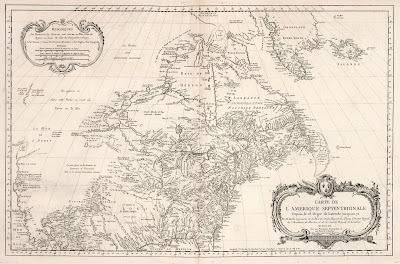 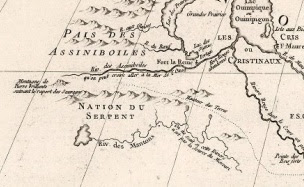 By the middle of the century, the Vérendryes seem to have discounted the idea that the River of the Mantannes was a true “river of the west,” but that river did hang around on maps for a number of years, sometimes shown as flowing to the west and sometimes depicted as possibly being connected with the Missouri, as on this Bellin map from 1755. Here Bellin shows a "Riv des Manton" connected with a lake similar to Delisle's Brochet Lake, but without a clear indication of whether that river flows east or west. Belling includes a note by the river which indicates that the river might be the source of the Missouri. Bellin didn't commit one way or the other to the River of the West, also including a note by the Assiniboine River indicating it might lead to the River of the West.

Basically, the French were still confused, not sure if there was a Sea of the West, River of the West, or some other water route to take them from the Great Lakes to the Pacific. Unfortunately for them, they were never able to figure it out, for as a result of the French & Indian War, in 1763, they gave up all their possessions in New France to the British.

Posted by Chris Lane at 3:54 PM No comments: