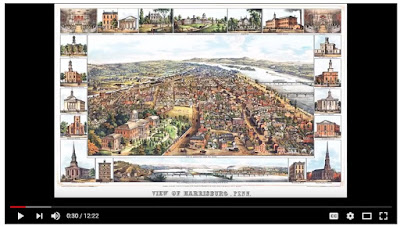 John Reps is the dean of scholars on this topic. His classic Views and Viewmakers of Urban America is the "bible" on the subject, not only because of Reps amazing listing of thousands of these views, but also because of his insightful text on the views and their makers. Well, John added to this story in a very interesting slide show which can be seen on the internet. It talks about how the prints were made and includes some fascinating images that I have never seen. Anyone interested in this topic should take a look!

Posted by Chris Lane at 1:03 PM No comments:

I recently heard of a wonderful exhibit at the State Museum of Pennsylvania which I am happy to call to everyone's attention. A description of the exhibit is given on the exhibit web site:

‘Every Thing of Interest Shown’: T.M. Fowler’s Bird’s-Eye Views of Pennsylvania, 1885-1905, on exhibit through May 6 on the first floor of The State Museum, showcases a series of bird’s-eye views, or panoramic maps, of Pennsylvania communities as they appeared during the late 19th century. 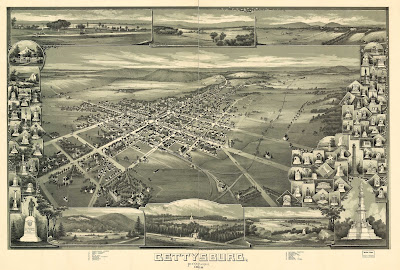 Urban bird’s eye view of the nineteenth century are one of the most interesting type of American prints there are. Beginning after the Civil War, the bird’s eye view became one of the most popular of print genre, with these prints being made of thousands of American towns and cities from the late 1860s into the early twentieth century. This was a period of significant urban growth throughout the country, and the civic pride which proliferated provided a fertile field for print publishers to market these visual vistas of America. According to John Rep’s seminal Views and Viewmakers of Urban America, publishers sent their artists out into the field throughout all parts of the country to draw and market the views. The artist would walk the streets of the town or city, drawing all the buildings and encouraging the citizens to subscribe to the view that would be produced. Once the entire area was sketched and enough subscriptions obtained, the artist would use a standard projection to turn his street-level images into a bird’s eye view. 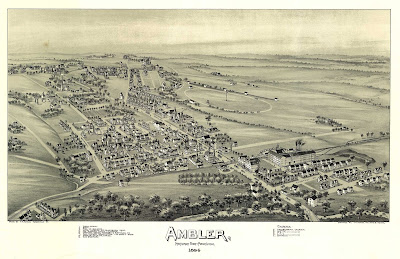 Because these views were primarily sold to citizens of the place depicted, they had to be accurate and all buildings shown, lest an owner were to be insulted. The relative size of buildings might be off, some physical features might be exaggerated (for instance the size of a river might be increased to emphasize its importance), or a building not-yet-built might be inserted so the view would not be out-of-date as soon as it was issued, but on the whole the views were amazingly detailed and accurate. Thus these views are not only highly decorative, but are also remarkable historical documentation, providing us with a wonderful documentation of nineteenth century urban America. 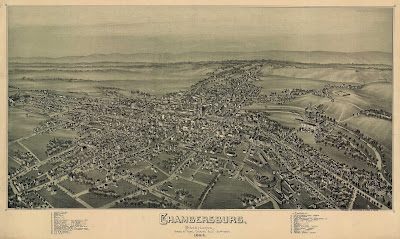 Thaddeus Mortimer Fowler (1842-1922) was the most prolific of all American bird’s eye view makers. Fowler served in the Civil War and was wounded at the Battle of Bull Run. That led to a discharge, but Fowler kept involved with the army by making tintypes of soldiers. He later moved to Madison to work for his uncle, a local photographer. Fowler began his career with bird’s eye views about 1868 by working as a subscription and canvassing agent for Albert Ruger of Chicago. Fowler soon came to work also as an artist of the views, making the sketches and preparing the final drawings. By 1870, he set up as his own publisher and from then on he acted as both artist and publisher on many prints, sometimes on his own and sometimes with others. 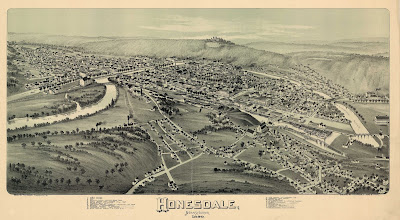 Over the years, Folwer was involved in over 400 different views! He worked right up to 1922, when at age seventy-nine he slipped on the ice in Middletown, N.Y., where he was undoubtedly promoting a revised view of the city which was planned for that year. Fowler made his first view of Pennsylvania, of Altoona, in 1872, subsequently making more that 240 more views of the Keystone State, more than half of his output. As noted on the State Museum web site, because of this Pennsylvania has more bird’s eye views than any other state. 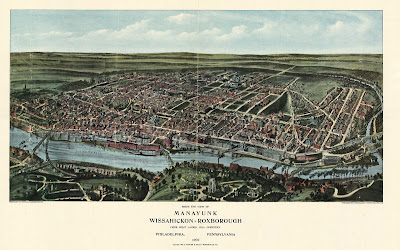 The State Museum exhibit is well worth visiting by anyone who is interested in bird's eye views or Pennsylvania history. The web site is also excellent, presenting much information and lots of images. The State Museum, along with the Library of Congress, have digitized many of Fowler's prints, shown both in the exhibit and in this blog.

Posted by Chris Lane at 5:24 PM No comments: