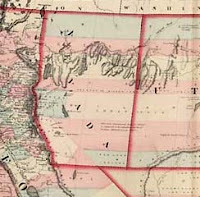 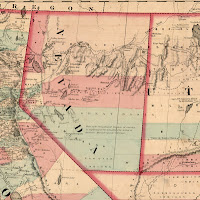 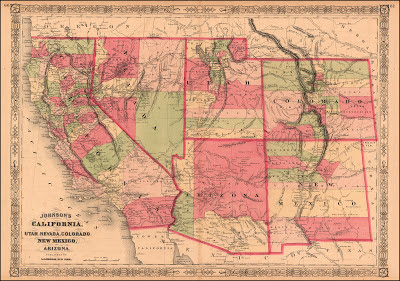 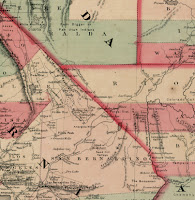 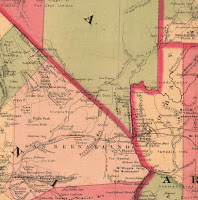 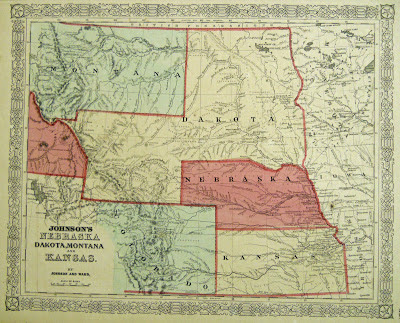 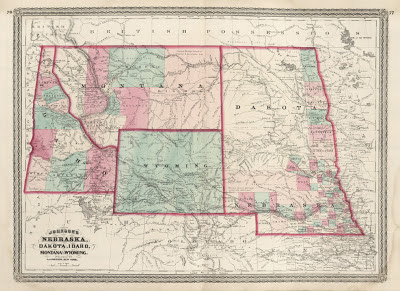 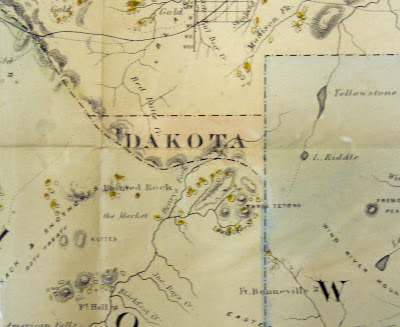 Posted by Chris Lane at 5:56 PM No comments: 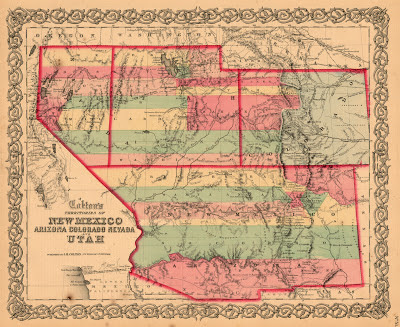 As discussed in the previous blog, once the Southerners had left Congress in 1861, the Federal government was able within one year to create three new territories. Nevada had been created to give the miners on the eastern slope of the Sierra Nevadas, hitherto living within in the jurisdiction of the government of Utah Territory, a local government independent of the Mormons. Not only would this bring the wealth of the Comstock Lode more directly within the control of Washington, but also the Federal government had no love for the Mormons and so was always willing to limit the scope of their power. 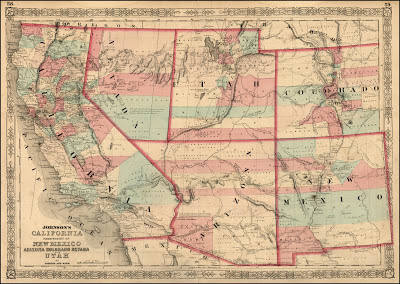 Thus it was that when silver was discovered further east in 1862, in what became the Reese River Mining District, there was little hesitation in Congress to move the border of Nevada one degree further to the east, from the 116th meridian to the 115th meridian, which was done in March 1863. The Congressional bias towards Nevada was further demonstrated in October 1864 when the territory, created only three years before, was admitted as a state. In contrast, Utah, which became a territory in 1850, didn’t become a state until 1896! 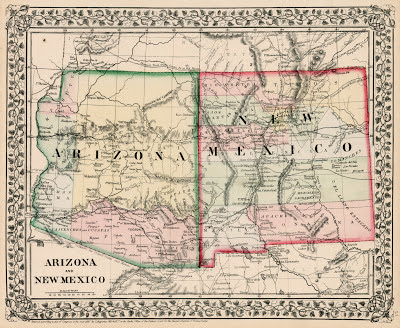 As further evidence of the desire of the now almost-exclusively northern U.S. government to take advantage of the absence of the pro-slavery Congressmen, the problem of the Arizona Territory was dealt with in 1863. It was clear that the vast New Mexico Territory should be divided, but Congress was loath to create a territory from the southern half, as had been originally proposed, for it would not only be inhabited mostly be pro-slave citizens, but it also would lie below the Missouri Compromise line of 36°30’, and thus could become a slave state. Instead, Arizona was created from the western half of New Mexico, so the border between the two territories would run North-South, rather than East-West. 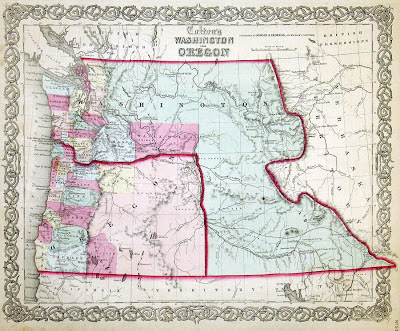 That same year of 1863, Congress created another territory as a result of a gold rush, for similar reasons to those which prompted the creation of Nevada and Colorado. In 1860, gold had been discovered in the eastern part of Washington Territory. Prospectors swarmed into the region and began to push east across the continental divide, into the Dakota Territory, where gold was discovered in 1862 near what became Bannack and then the following year near what became Virginia City. Others miners probed into the more south-eastern part of Washington Territory, where gold was discovered in the Boise Basin in 1862.

The miners in these areas felt isolated from the Washington Territorial government in Olympia, well to the west. When this was combined with the desire of the citizens in the Puget Sound area not to end up being outvoted by all the voting-age miners flooding in to the eastern parts of the territory, it was a popular decision all around to create a new territory of Idaho. 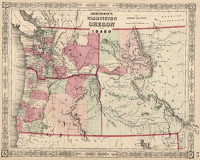 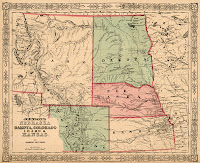 Thus in 1863, Washington Territory was trimmed in size to a width that essentially matched that of Oregon to the south, and the eastern part of Washington became Idaho Territory. This new territory, though, was created much larger than just that, for Idaho took in also the western half of the Dakota Territory and five degrees off the western part of Nebraska, Idaho’s eastern border being set at the 104th meridian. This not only incorporated into Idaho the gold mining region around Bannack and Virginia City, but it also cut Dakota down to about seven degrees in width, which was becoming something of a standard size for territories as they moved towards statehood. For good measure, the northeast corner of Utah was cut off and given to Idaho, the federal government once again demonstrating its bias against the Mormon government of that territory.

This new territory of Idaho was really too large to be sustained, especially as the eastern mining towns, such as Bannack and Virginia City, were separated by the rugged Rocky Mountains from the western mining towns and the capital city of Lewiston. Almost as soon as the Idaho territory was created, the settlers to the east of the Bitterroot range began to ask for a new territory and for a seat of government more accessible to them.

A champion for their cause appeared in Sidney Edgerton, who had been appointed by Abraham Lincoln as first Chief Justice for Idaho. Edgerton and his family set off for Idaho from Washington in 1863, but they ended up stranded in Bannack, unable to make it across the mountains to Lewiston. Edgerton soon realized the wealth of the eastern mining camps and he was converted by the miners there of the cause of splitting off a new territory from Idaho. 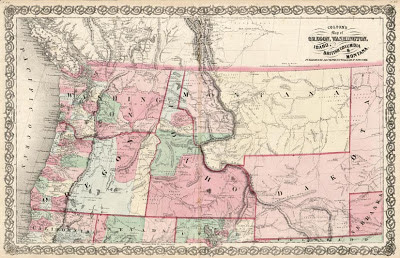 Edgerton was chosen by the miners to lobby for their cause in Congress, so he set off for Washington with $2,500 in gold nuggets to be used to aid his arguments. The nuggets and his lobbying had the desired effect and in 1864 a new territory of Montana was created out of the north-eastern part of Idaho.

The eastern border of Montana extended to the Dakota Territory and the southern border was set at the 45th degree parallel so that there was room ultimately for two states between Colorado and Canada. Idaho was thus reduced in size close to what had been the eastern part of the original Oregon Territory, but not quite. 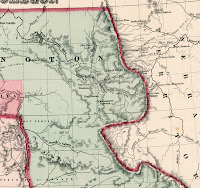 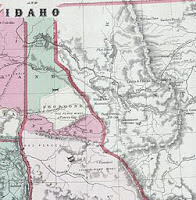 The original Oregon Territory had extended to the continental divide in the east, however about half-way up Idaho’s new eastern side, the border stopped following the continental divide and instead turned west to follow the Bitterroot Mountains. An old story said that this was because the survey party had gotten so drunk that they didn’t realize they had taken this wrong turn, but the true story is even more interesting.

When Judge Edgerton had first arrived to take up his judgeship, the territorial governor, William Wallace, had appointed him to a remote district east of the Bitterroots in order to show his contempt for judges imported from the east. Wallace aggrieved the wrong man, for with Edgerton's political connections, he was able to change the border between Idaho and Montana to the advantage of the new territory—-of which Edgerton was appointed first territorial governor—-by adding the fertile Bitterroot Valley to Montana instead of Idaho.

When Idaho was cut down to manageable size in 1864, the large southeastern part of the old territory—-south of Montana—-was attached to the Dakota Territory, giving that territory an odd, butterfly shape. This, though, was simply a temporary configuration which would soon be changed by Congress.

The Civil War years saw many significant changes to the political borders of the American West, something which continued for the rest of the decade, as we'll see in the next blog in this series.

Posted by Chris Lane at 6:46 PM No comments: