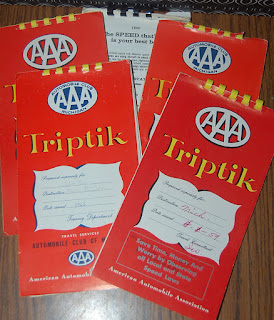 I have always loved maps of all sorts. As a kid I studied maps in books and magazines, poured over automobile maps from gas stations, and then when I realized that one could actually get hold of them, became entranced by antique maps. Back in the sixties, when my family would go on a road trip, we would use the famous AAA “triptiks.” I would love to follow along the routes, noting the intersections and sites that appeared on either side of the route we were following. 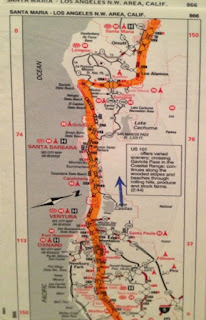 The triptiks are a good example of itinerary or directional map. That is a map the primary concern of which is to follow an itinerary or route from point A to point B, noting the places, rivers, bridges, intersections one would come across in following that route, but not showing anything further afield than what one might see along the way. 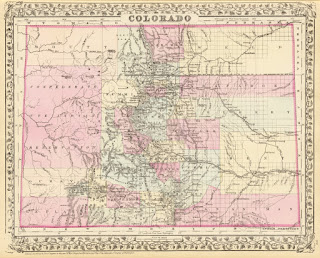 These maps are in contrast to “area” maps, which show cartographic information for an entire area—-usually rectangular but sometimes circular—-without predetermining a starting or ending point, nor a route to take (though one can, of course, draw a route onto an area map). 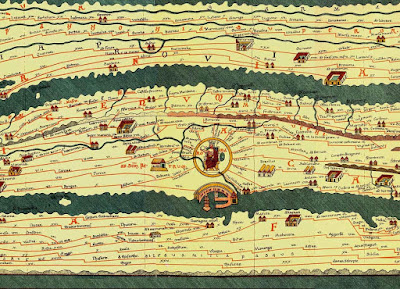 [ Facsimile part of the Peutinger Table centered on Rome ]

The earliest directional map I know of is the famous “Peutinger Table.” In the late first century B.C., Marcus Vipsanius Agrippa produced a road survey and map of the world for Emperor Augustus. None of the original maps has survived, but a later version was found near the end of the fifteenth century and eventually found its way into the library of Konrad Peutinger (fl. 1508-47). Though that map is now lost, copies of various cartographers and modern facsimiles have been made. 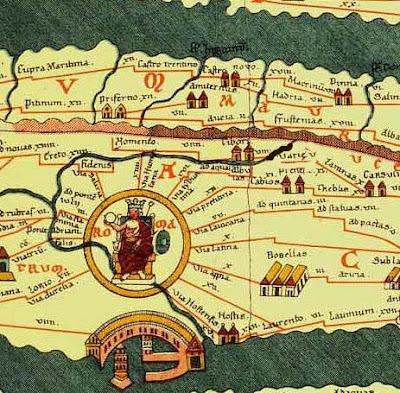 [ Detail of facsimile of area around Rome, with roads in yellow ]

The Peutinger Tables consist of eight sections depicting the world along the primary roads of the Roman Empire. The area shown extends from the southeast corner of England—part of the first section showing the rest of Britain having been lost—to Ceylon, the eastern edge of the known world. Reflecting its source in Agrippa’s road survey, the map is drawn around the roads, which are laid out in a schematic fashion—not dissimilar to the way the lines are laid out on the famous tube map of London—though here the roads are put down mostly in a horizontal direction, creating a map that is essentially a long, narrow strip. The Roman roads are given in detail, each notched to indicate a day’s march, with the places and camps one would come to if traveling on those roads. Really, very similar in intent and execution to a triptik. 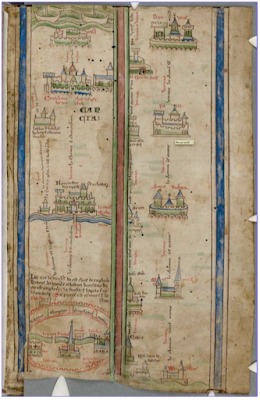 The notion of itinerary map appeared again in the middle of the thirteenth century in the work of Benedictine month Matthew Paris. Paris worked in the monastery of St. Albans and he was one of the greatest mapmakers of the medieval period. He produced maps of England, Palestine, and itinerary maps for the Pilgrim route to the Holy Land. Written itineraries for pilgrims were well known in the Middle Ages, and they contained descriptions of what one would find along a pilgrimage route. Paris went further and presented much of this information in map form, showing the route from England to Apulia, each day’s journey marked out and important topographical and social features noted along the way. As an aside, the cartographers for a number of the area maps produced in the medieval period, such as the Hereford world map, used written itineraries to create the maps, though presenting them in an area rather than itinerary format. 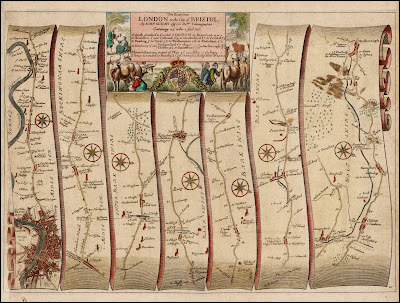 The next examples of directional maps are the strip maps issued by John Ogilby in his Brtiannia of 1675-76. Ogilby (1600-1676), one of the more colorful figures associated with cartography, started life as a dancing master and finished as the King’s Cosmographer and Geographic Printer. In the course of an eventful life he built a theater in Dublin, became the Deputy Master of Revels in Ireland, translated various Greek and Latin works and founded a book publishing business. In the process he twice lost all he possessed, first in a shipwreck during the English Civil Wars and then in the Great Fire of London. Even this disaster he turned to advantage by being appointed to a Commission of Survey following the fire. 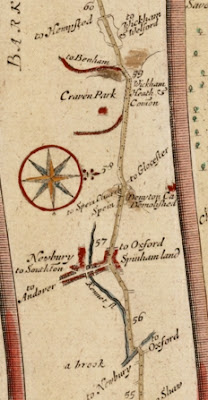 After the fire, Ogilby organized a survey of all the main post roads in the country, and then published a road atlas, Britannia. In this atlas, the maps were engraved in strip form, essentially like a series of triptik pages put next to each other on the same sheet. The maps give details of the roads themselves and descriptive notes of the country on either side. Intersections of other roads are indicated and each strip has a compass rose to indicate changes in direction. Topography is shown using the molehill style, and uphill or downhill is illustrated by inverting the picture of a grade on the page. A number of other publishers later followed the Ogilby model, which was particularly popular in Great Britain. 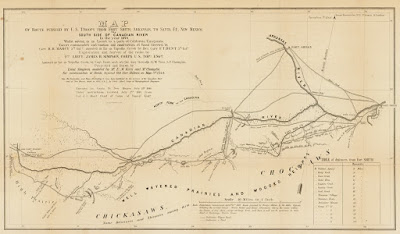 [ One of four sections of Simpson map ]

Another place one finds itinerary maps is from explorers, who would make maps they surveyed along their routes. These surveys would often be amalgamated into area maps, but they also were sometimes issued as itinerary maps. James Hervey Simpson mapped a route from Fort Smith, Arkansas to Santa Fe, producing a map in 1849 which was intended as a wagon road itinerary map for emigrants and traders. 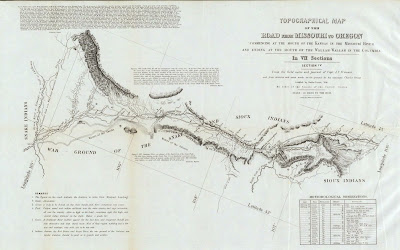 [ One of seven sections of Preuss map ]

Another example of that is the seven sheet map drawn by Charles Preuss based on the surveys and notes made during John Frémont’s expedition along the Oregon Trail in 1842-43. These maps were combined into the Preuss/Frémont map of 1845, but the seven sheets were very much in the tradition of an itinerary map intended for use by the many emigrants along the Oregon Trail, as well as 49’s heading off to the gold fields of California. 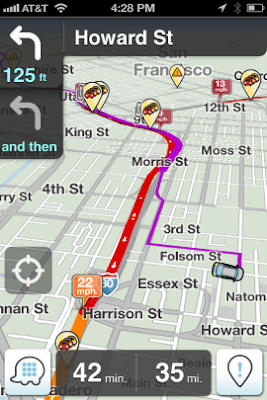 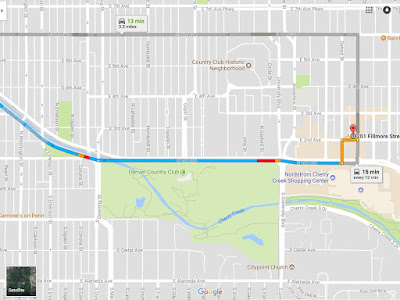 On a personal note, though I still love maps in all different formats, I am a bit sad to see the relative demise of the use of area maps. So many people use the digital directional maps, that area maps—especially printed ones—have become almost obsolete. This is a shame, as while one can follow a route most easily using an itinerary map, area maps put those routes into a wider context. They also allow one more easily to stray from the planned itinerary—either physically or just mentally—and the loss of that is I think a sad one.

Posted by Chris Lane at 4:02 PM No comments: