From the early days of printed book production, in the 17th century, expensive and/or long publications were often initially sold in parts or fascicles. The fascicles were simply a part of the larger work, where the cost to purchase was less so that the buyer could eventually buy the entire book in installments and the publisher would get money as the book was produced, not having to pay for the entire production cost at the beginning.

This method of production also had the advantage to the publisher that if the book proved to not be of interest to the public, with subscriptions not be obtained in sufficient number, only a minimum amount was spent before the project was abandoned. Some of these plate books never got off the ground and others lost subscribers over time, so that the books were never completed. An example of this is James Otto Lewis’ Aboriginal Portfolio. Lewis originally intended to issue ten parts with eight prints in each, but he was unable to obtain enough subscribers so that only a very few sample prints from the tenth part were ever made. 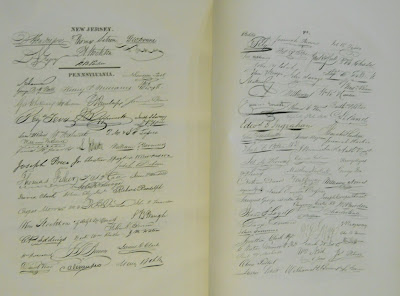 This method of producing books was particularly important for plate books, where the cost of creating the matrixes, printing the plates, and then often coloring them was substantial. The publisher would start by producing a first part on speculation, using the completed fascicle as a sample to help obtain subscribers for the work. Once he had enough subscribers signing up and paying for the first part, that money was then used to produce the next fascicle, and so on until the publication was completed. The importance of the subscribers is shown by the fact that Thomas McKenney included a facsimile of his subscriber list in his bound History, an image of which is above.

These fascicles were usually produced with paper covers which included information on the book, often including a sales pitch to keep the subscriber interested and to help gain new subscribers.

Once finished, the subscriber would usually have the parts bound together and the publisher could also sell completed copies of the book, using the plates and text that had been printed beyond those needed just for the subscribers.

One of the pioneers of this sort of plate book sold by subscription was Mark Catesby. He produced his Natural History of Carolina, Florida and the Bahama Islands between 1731 and 1743, issued in parts for over a decade. The spread of dates for this book are a result of the subscription process, and this was typical of plates books produced in this manner.

Most elaborate plate books of the nineteenth century were sold by subscription, including Alexander Wilson’s American Ornithology, Thomas McKenney’s History of the Indian Tribes of North America, and even the mammoth Birds of America by John James Audubon.

Occasionally one will come across the original fascicles of these books which were never bound together. In these instances either the subscriber dropped out before the work was finished, or he/she simply didn’t bother bind them even when complete. Other times subscribers would keep the paper covers and bind them together with the text and plates.

Posted by Chris Lane at 6:54 PM No comments: