The format is the message

One thing that map dealers and map collectors learn early on is that the format in which a map was published has a great deal to do with its historic significance and its monetary value. A very rare example of a hugely important map of the American West is a nice example of this truism. 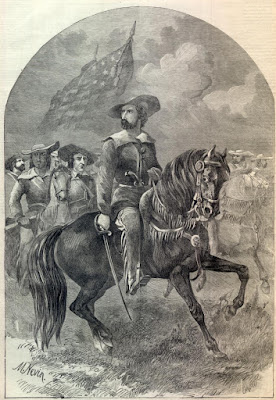 In 1843, in response to the great American migration to Oregon and the American West, the U.S. Corps of Topographical Engineers sent out John C. Frémont to survey and map what would soon come to be known as the Oregon Trail up to the South Pass. Two years later, Frémont was sent out again, at the instigation of Senator Thomas Hart Benton (Frémont’s father-in-law) to further explore the western part of the country, following the Oregon Trail all the way to the Pacific Ocean. On his return, Frémont passed to the south of the Great Basin, establishing for the first time the basic outline of the vast region which would become, in just a few years, the western part of the United States.

In 1845, Frémont was sent out again, in part because of the tensions between the U.S. and Mexico which would lead to armed conflict the following year. Frémont arrived in California just when local ferment led to an American rebellion which soon became part of the wider Mexican War. Frémont was appointed the first Governor of California, but soon became embroiled in a conflict with the military commander of California, General Stephen W. Kearny. This led to Frémont being sent back east under arrest and to his eventual court-martial and dismissal from the army. 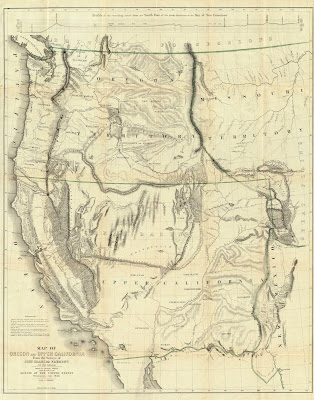 Despite the personal failure of this 1845-46 expedition, the 1848 publication of a journal of Frémont’s explorations, entitled Geographical Memoir upon Upper California, was well received, and the map it included, “Map of Oregon and Upper California,” which Charles Preuss produced based on Frémont’s surveys, is a cartographic landmark, one of the most important maps of the American West. It depicts the entire west from the Colorado foothills to the California coast, and from the new Mexican border to the northern border of Oregon. Drawing on an earlier Frémont/Preuss map of the region from 1845, as well as other authorities, this map is corrected and filled in considerably, making it by far the best map of the region to date.

As Frémont himself wrote in his Geographical Memoir, “The map has been constructed expressly to exhibit the two countries of Oregon and the Alta California together. [These territories officially became part of the United States between 1846 and 1848.] It is believed to be the most correct that has appear of either of them...” The importance of this map is indicated by the fact that Carl Wheat gave more space to the description of this map than to any other in his seminal Mapping the Trans-Mississippi West. 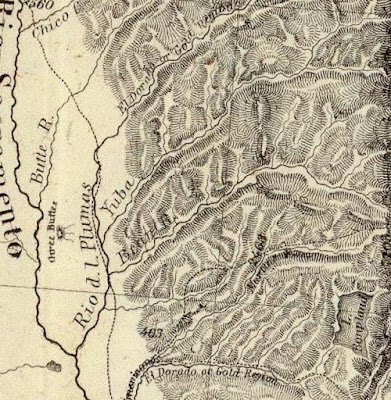 The Frémont/Preuss map was probably issued in September, 1848, just after information about the discovery of gold in California reached the east coast. This was reflected in two very small legends on the map, “El Dorado or Gold Region,” placed along the South Fork of the American River and on the upper part of the Rio d.l. Plumas (Feather River), both flowing out of the foothills of the Sierra Mountains. Though inconspicuous, these legends makes the Frémont/Preuss map the first general circulation map to include any mention of the California gold discovery of 1848.

As the news spread of this discovery, through President Polk’s announcement on December 5th and then all the subsequent newspaper articles and private publications, there was an immediate demand for information on the gold strike, especially for maps which prospective prospectors could take with them. Many publishers rushed maps to the market, many containing spotty or completely erroneous details, but the maps which had any accuracy were mostly based on the Frémonth/Preuss map, which was without questions the best map of California available at that time. 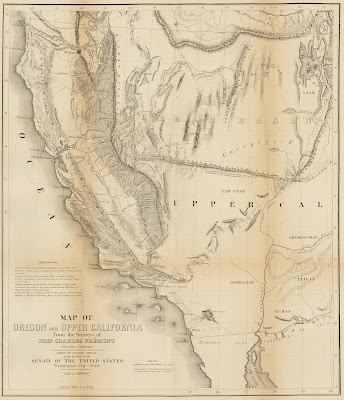 The same demand led to an 1849 reissue of Frémont’s Geographical Memoir, with its maps, as well as a reduced version of the “Map of Oregon and Upper California,” which focused on California, eliminating Oregon Territory and the Rockies. 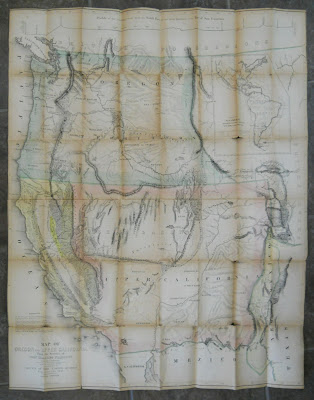 What has not previously been reported is that there was the reissue of the full-size “Map of Oregon and Upper California” specifically designed for those planning to head to the “Gold Regions” of California. Rather than being a map that was issued in a report, this was produced as a separately issued pocket map.

The convenience of having maps that folded into a small size had been obvious ever since maps became items that were sold to the general public. For those wanting to take a map with them when they traveled, these maps could be easily carried in a pocket or bag. In the nineteenth century, these maps were printed onto banknote paper, which is tough yet thin, so it could be folded without as much wear. The maps were folded into covers and were usually brightly colored to make them easier to read when on the road. For those heading to the California gold fields, the need for such a map would be clear. 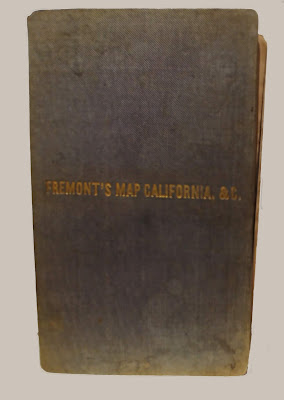 Thus, a pocket map edition of the Frémont/Preuss map was issued, probably either right at the end of 1848, or in early 1849 (the date on the map states 1848, but that is from the original title, which the map contains). The covers of the map are entitled "Fremont's Map California. &c." It was printed from the same stone as the original edition, but with a number of changes made, besides the obvious format change. 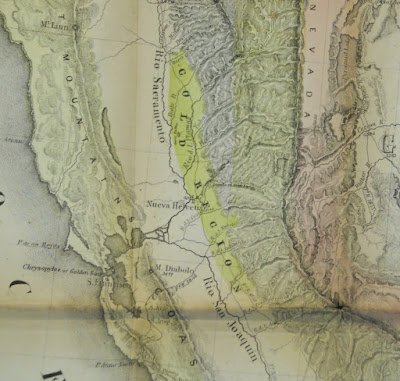 First, typically of pocket maps, this map was much more brightly and extensively colored than the original issue. Secondly, two additions were made to make the map more useful to the California gold seeker. A large legend, “Gold Regions” is placed along the foothills of the Sierra Mountains, colored with gold highlighting. 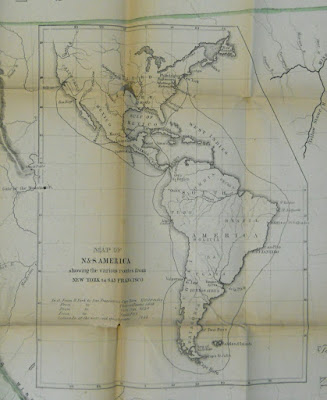 Then inserted into the upper right corner is a map “showing the various routes from New York to San Francisco.”

It isn’t clear who published the map, but given the use of the original stone Frémont may very well have been involved in its production—perhaps hoping to cash in on his explorations after their rather unpleasant ending. An extensive search has turned up only two copies of this version of the map, and while all pocket maps from the 19th century have a high attrition rate, this would seem to indicate that this map did not sell as well as the publisher would have hoped. This scarcity, and its historical significance, make it perhaps as desirable a map of related to the California Gold Rush as any. A true nugget from the California Gold Rush.

Posted by Chris Lane at 6:43 PM No comments: