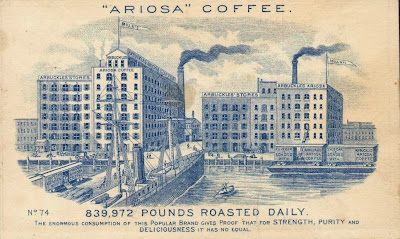 Arbuckles Coffee was the most famous coffee company in the United States in the second part of the nineteenth century. Begun just after the Civil War by brothers John and Charles Arbuckle, the company came up with a means by which they could sell pre-roasted "Ariosa" coffee in one pound bags.

Prior to this, coffee beans were sold green, and they had to be roasted before use on a wood stove or over a skillet. John Arbuckle came up with the process where they coasted the roasted beans with an egg white and sugar glaze, which allowed them to retain their freshness. They then packaged them in one pound bags and sent them around the coutry. 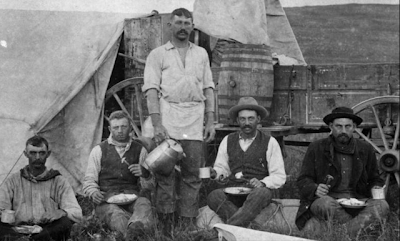 Arbuckle’s coffee became a favorite around the country, especially out west where the cowhands were able to get a consistent cup of good tasting coffee. Such was their fame and wide-spread use that “Arbuckles” became a generic name for coffee. Arbuckles became known as “the coffee that won the West.” 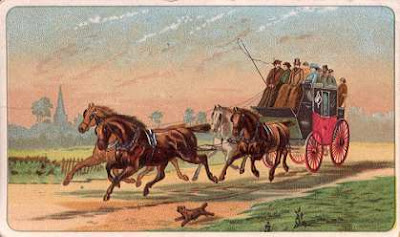 The Arbuckle firm was innovative in their marketing, as well as processing, and they came up with a number of schemes to promote their coffee, including packaging a peppermint stick with each bag. In the 1880s they began to issue a number of series of small, colorful “trading cards” of different subjects, done with colorful chromolithography by the printmaking firm of Donaldson Brothers. Each bag contained one of the trading cards, with the idea that customers would try to collect all the cards in a series. 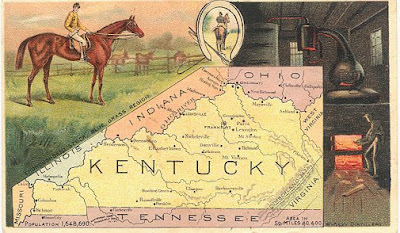 The series included different subjects, including animals, sports, food, historic scenes, and—one of their most popular—maps of states and the nations of the world. The state series were published in 1889 and included a map of the state surrounded by vignette scenes from the state, as well as various statistics. The verso of each card included an advertisement of Arbuckles Ariosa Coffee. 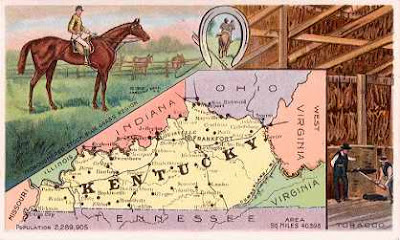 The state map series proved so popular that in 1915 the company came out with an updated series of these cards. The maps sometimes had new vignettes, the statistics were updated, and roads added. 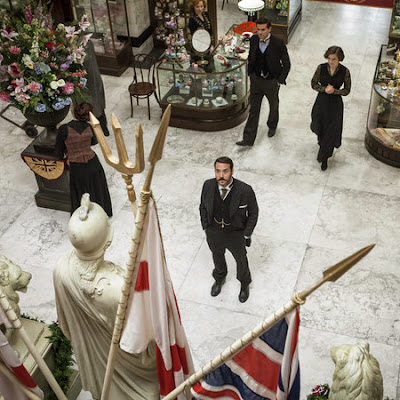 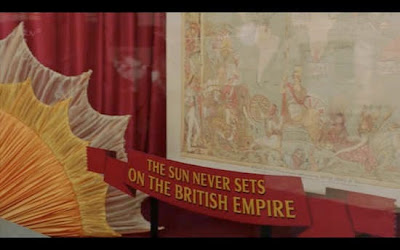 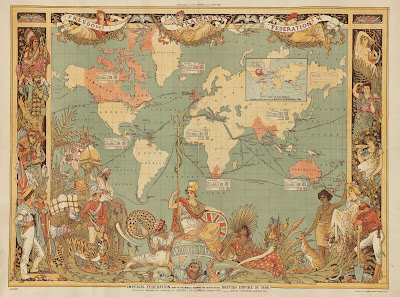 Posted by Chris Lane at 4:12 PM No comments: 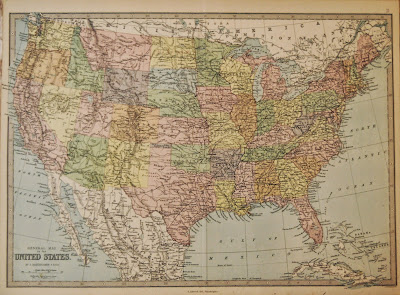 New research at the Philadelphia Print Shop often results from our acquiring a new print or map which contains an interesting feature about which we do not know much. This happened recently when we were writing up a map of the United States from 1882 by John Bartholomew. Looking over the map, we noticed that the Dakota Territory was divided, even though this map was issued four years before North and South Dakota were created. A closer look showed that the northern section was titled "Lincoln" and not North Dakota.

Vince Szilagyi decided to figure out what this was about and he found that this "Lincoln Territory" was just one of several proposals for the division of the Dakota Territory before 1886. Here is what he found out: 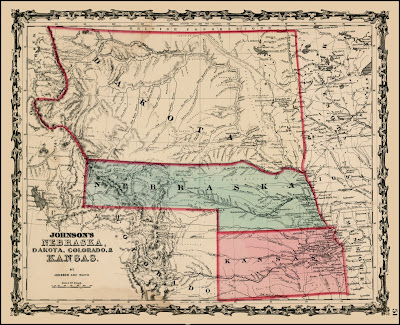 Initially, a huge Dakota Territory was created out of parts of the Nebraska and Minnesota Territories in 1861, extending from Minnesota to the Continental Divide and between the 43rd parallel and the Canadian border. This vast territory was whittled down in the next few years so that by 1868 the territory essentially encompassed the lands lying today within North and South Dakota. Prior to the Civil War, most of the population consisted of Native Americans, primarily Sioux, settled on several Indian reservations.

After the end of the Civil War, the Dakota Territory had become a place of major activity and interest for Euro-Americans in a United States eager to expand and grow after years of destruction. The territory experienced an explosion of development in the 1870s due to its mineral wealth, fertile soil and the expansion of the railroads into the region. As the area boomed and the Indians were displaced by a series of conflicts with the US Federal Government, there began a series of calls to split the huge territory into smaller, more manageable units.

The desire to break the Dakota Territory into smaller units was prompted by a couple of factors. First, the territory had two main population centers, one in the northeast around Bismark and one in the southeast around Yankon. These were separated by hundreds of miles of difficult and untamed terrain. The isolation was so pronounced that Judge J.A. Barnes of the Dakota Territory Supreme Court proclaimed “The people of Northern Dakota want a division of the territory because they are so far remote from Southern Dakota that they do not feel any identity of interest.”

Secondly, and perhaps more importantly, dividing the territory into two parts would double the number of Senators sent to Washington from the Dakotas when they eventually became states. As the territory at the time was solidly Republican and the Senate was tightly contested, the Republican Party supported the split wholeheartedly. Surprisingly enough, the Democrats also believed splitting the territory would be to their advantage, as they had hopes that one of the new territories would swing Republican and the other Democratic. 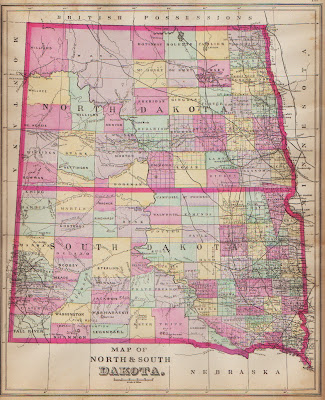 Despite, or perhaps because of these factors, the actual splitting of the territory was a difficult and slow process. Numerous proposals were put forth and bills submitted to split the Dakota Territory into smaller units during the 1870s and ‘80s. None of these succeeded until 1889, when the division was finally realized, with the admission of two new states, named sensibly, albeit somewhat dully, North and South Dakota.

The earlier proposals were unsuccessful for various reasons and their proposed political entitles, with names such as Pembina, Huron and Lincoln, were never realized in fact. However, they did, get a ghostly, cartographic existence, appearing on a few maps, now of considerable interest to collectors and students of history.

An early proposal to split the Dakota Territory involved chopping off essentially the top half and naming it Pembina. Pembina Territory never became a reality, although in the Dec. 22nd, 1874 edition of the Sacramento Daily Union there is a brief one sentence note declaring that "The Pembina Territory Bill was revived on motion of Boreman" in the U.S. Senate, indicating that the idea was at least discussed beyond the wilds of the Dakota Territory. Only one cartographer, John Bartholomew of Philadelphia, seems to have put the proposed territory on his maps, making these particularly rare.

Another similar proposal to split the territory was made in July of 1876. A convention was held in Yankon (the territorial capital and now in South Dakota) to address the question, where the Dakotans came to the conclusion that they supported “the organization of a new territory out of the northern part of Dakota, and believe such an organization will largely tend to enhance the interests of the people in both sections." The U.S. Senate passed a bill in December of 1876 to create the Territory of Huron out of the Dakota Territory north of the 46th parallel. The bill was never signed into law, but some cartographers took a gamble and included the nonexistent territory their maps. This “jumping the gun” by publishers was not unusual, as fierce competition often spurred the companies to try and be the first to show new developments.

During the 1880’s, several further attempts were made to split off the northern portion of Dakota into a Lincoln Territory. Unlike Huron and Pembina which more or less shared their borders with present day North Dakota, the Lincoln Territory would have encompassed all of present day North Dakota as well as extending into modern day South Dakota. This larger territory was bitterly opposed by Democrats in the territory as well as Democrats in the Senate, who refused to consider a bill creating a territory named after their most bitter political foe. Thus this bill never made it past the Senate.
Posted by Chris Lane at 6:57 PM 1 comment: