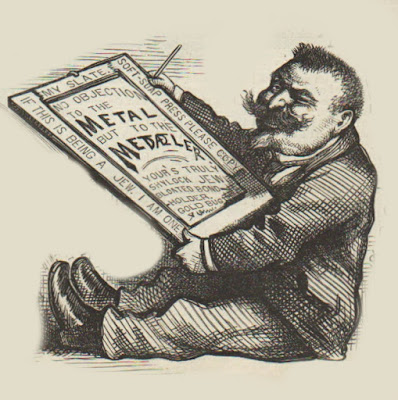 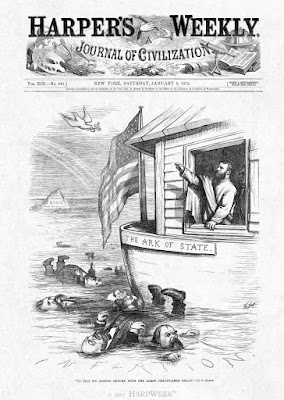 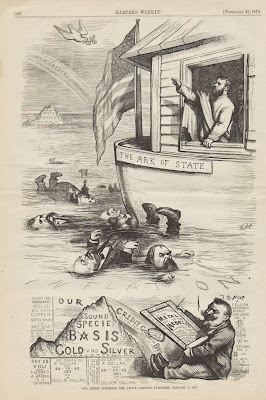 Posted by Chris Lane at 4:00 PM No comments:

I just returned from a wonderful trip to Australia, my visit "down under,” and so I am inspired to write about the mapping of the first “Australis,” Latin for ‘southern,’ to appear on maps, the mythical “Terra Australis Incognita,” that is ‘Unknown Southern Land.’ 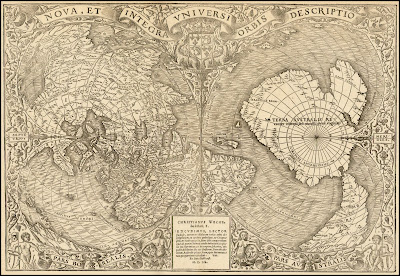 If you look on many maps of the sixteenth century, you will see a very large land mass covering the southern pole, looking much like the continent of Antarctica. This is really strange, as that continent was not actually discovered until 1820. If that is so, how did what looks to be Antarctica appear on maps from four centuries before? This anomaly has been explained by some (most famously Charles Hapgood in Maps of the Ancient Sea Kings) as being the result of an ancient advanced civilization or by others (such as Erich Von Daniken in Chariots of the Gods) as evidence of a visit to Earth by space visitors in the distant past. The truth, though more mundane, is still of considerable interest. 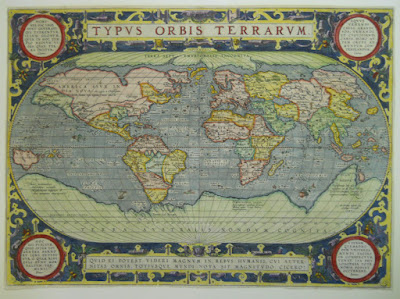 During the Renaissance, as scholars were trying to get a handle on their world in a period of discoveries of new lands, there were many who supported a theory that there had to be an as-yet-discovered continent in the southern-most part of the globe. This was based mostly on the supposition that there had to be a large land mass in the south to balance all the land in the north. 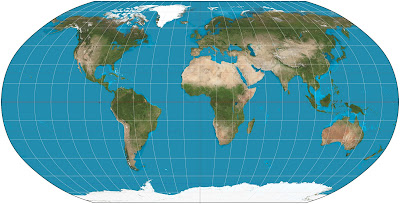 If you look at a modern map of the world [such as the one above by Daniel R. Strebe] and look all the land other than Antarctica, it is clear that the majority of the land mass is north of the equator. It was thought that if there were not a large, balancing land mass in the southern hemisphere, the globe would wobble or perhaps tip over. 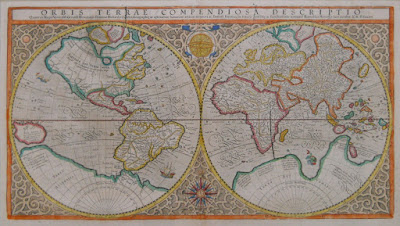 Gerard Mercator was a proponent of this theory and so he included this continent on his world map. 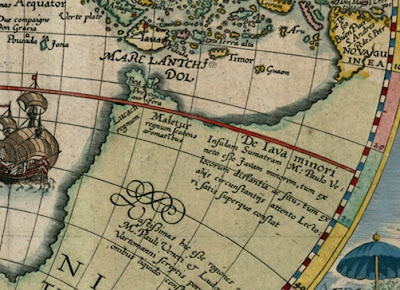 Once one accepted that there must be a hitherto undiscovered land in the south, one tended to read any information about the southern regions as giving shape to this land. So Marco Polo’s report of “Greater Java” was seen as confirmation of this southern continent, and Polo’s “Locac” became the region of Lucach located there, as well as two other locations based on a misreading of Polo, “Beach” and “Maletur.” 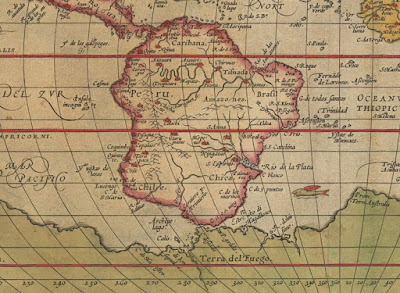 The existence of this great southern land was then further confirmed when in 1520 Magellan sailed through the straits thereafter named after him. Magellan sailed between South America and what he called “Terra del Fuego,” which naturally was assumed to be the shore of Terra Australis. Thus it was that maps began to give a firmer shape to that continent. 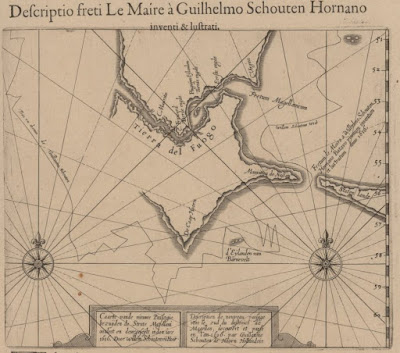 However, Tierra del Fuego is an island, not part of Terra Australis, as was proven in 1616, when Jacques Le Maire and Willem Corneliszoon Schouten sailed from the Atlantic Ocean, south of Tierra del Fuego, and into the Pacific. 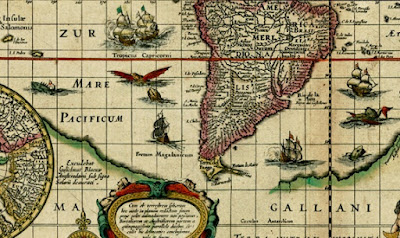 This did not get rid of the notion of Terra Australis Incognito, however, it just necessitated a modification of the shape of that putative continent. Map makers, not wanting to have to re-engrave entire new plates for their maps which had hitherto shown the continent including the northern shore of Tierra Del Fuego, simply erased the shoreline connected to the now-known-to-be island, ending the coast vaguely somewhere in the oceans to the east and west. 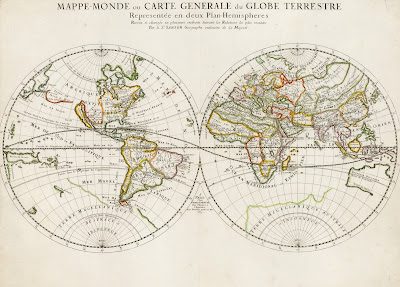 Through much of the seventeenth century, as explorations were being made in the southern oceans, new discoveries of land were often initially assumed to be part of Terra Australis-—for instance this was thought at one time for the New Hebrides and Australia—-until this was shown to be incorrect. As these discoveries were reported, parts of the coastline of Terra Australis, which had appeared on maps since the sixteenth century, were more and more erased, so that by the end of the seventeenth century, people were beginning to doubt its existence. 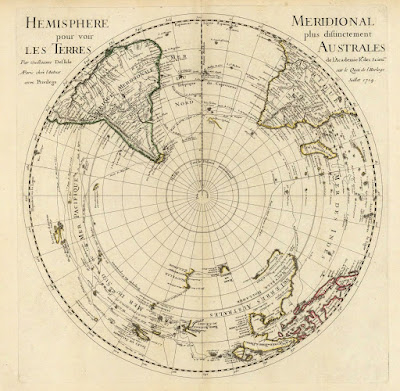 It was one of the greatest scientific cartographers of all time, Guillaume Delisle, who finally decided—-given the total lack of any evidence—-that he would completely remove the continent from his maps. Quite ironic that the person who was most closely following good, scientific principals in mapmaking, ended up making maps which were the furthest from reality. 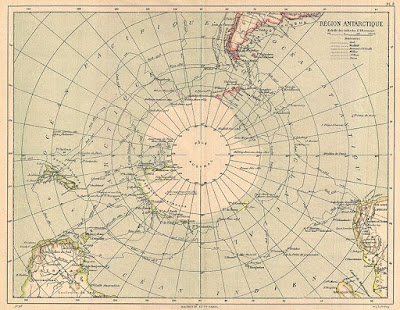 The hope for a great southern continent continued into the eighteenth century, with James Cook having secret instructions to search for it during his 1768-71 voyage supposedly just to observe the transit of Venus across the Sun from Tahiti. On his second voyage, of 1772-73, Cook sailed around the seas so far to the south that he proved that if there were any southern continent, it was much smaller than the original theories suggested. It wasn’t until 1820 that the continent was first actually sighted, with the last of the known continents finally making it onto maps of the world legitimately, rather than as a matter of speculation.

Posted by Chris Lane at 5:34 PM No comments: