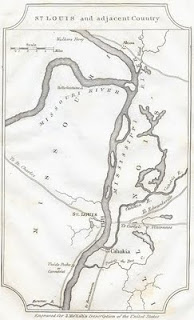 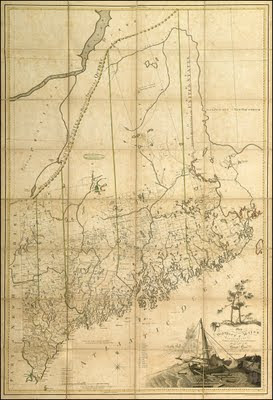 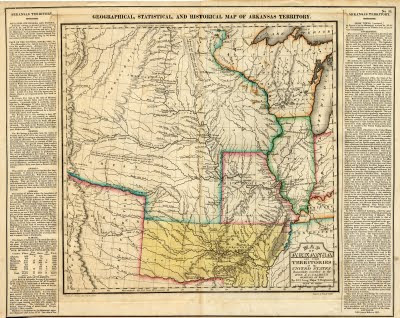 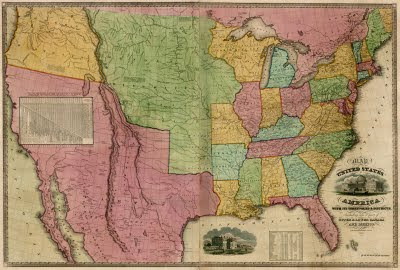 Posted by Chris Lane at 5:40 PM No comments:

I continue to work on my research of early views of Denver and one of the issues I find interesting is the role of photography. The first settlement in what would eventually become Denver was in late 1858. This was just about the time when photography was becoming a more practical medium for recording images. Photographers were beginning to travel around the world to take photographs of major events, for instance the Crimean War, and of distant places, of which the American West would become a favorite. 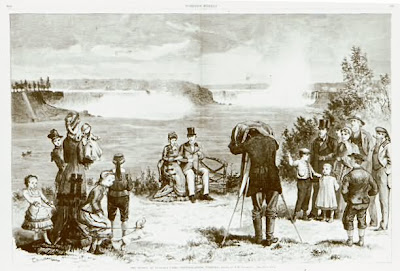 In the mid-19th century, photography had practical limits in terms of what it could capture. Motion was a problem, so rarely were action “events” portrayed; rather early photographs tended to be of posed portraits, buildings, or landscapes. Also, photographs had a difficulty in showing distant detail, so panoramic images were rarely successful and most photographs focused on a narrow scene, for instance of a building or a street scene.

The Pike’s Peak gold rush, as it was called, began as a trickle in late 1858, but was in full flood by the spring of 1859. In early 1859, a saloon, hotel, sawmill, and newspaper had all appeared in Denver, which had a population of about 1,000. Also, by that summer at least one photographer was in the city recording its rude beginnings. We know this because in the June 11, 1859 issue of the Denver Rocky Mountain News, this report appeared,

“Pike’s Peak.—We observed the other day Mr. Welch, the artist, taking views with the apparatus [a camera] in and around the cities of Denver and Auraria to illustrate Frank Leslie’s Pictorial. Mr. W., we understand, is going into the mountain mines for the same purpose. We doubt not but the views taken from the summit of the Rocky Mountains will grace the pages of the pictorial with delicate sublimity.” 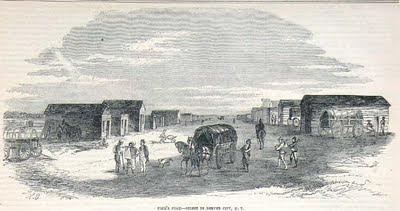 No Mr. Welch is listed as being a resident of Denver and though there are various Welch’s listed as photographers in this period in other cities, it is not clear which of these, if any, was the Mr. Welch in Denver in 1859. It seems that Mr. Welch was part of a group sent by Frank Leslie to chronicle the Pike’s Peak gold rush for his Illustrated Newspaper (an earlier article with images on the gold rush appeared in the April 30 issue) and his photographs were used as the basis of prints in the paper, for in the August 20, 1859 issue was an article, and three pages with eight illustrations entitled “Scenes and Sketches at Pike’s Peak.—From Photographs by our own Correspondent.” 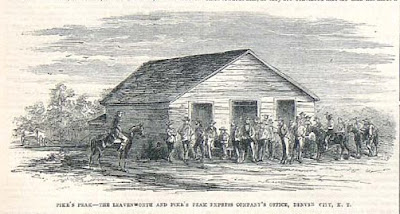 One of the images was a scene of a party of miners, two showed camps of the Leslie’s party and the other five images were scenes of Denver. These are, in fact, the very first printed images of Denver. Perhaps all, but certainly some of these wood engraved views are based on Welch's photographs. The images of the Rocky Mountain News office and of the Leavenworth and Pike’s Peak Co.’s office are very photographic in nature and their source gives them a solid historic authenticity. 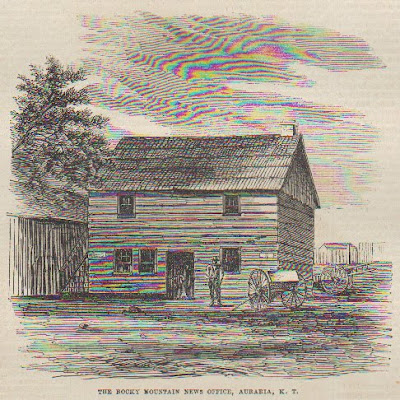 These images are a good example of the intelligent use of the different strengths of the two processes of photography and print making. Photography could provide a precisely accurate image of a place, but it was impossible to widely disseminate the image through photography. Newspaper prints, on the other hand, were printed in huge numbers, so transferring the photographic image to a wood engraving allowed the accurate photographic image to be distributed in the tens of thousands.

In the case of these first prints of Denver, none of the original photographs are known to exist, but there is another example of an early Denver wood engraving where the photograph is known. It is interesting to look at these two images.

The wood engraving is from a French magazine entitled Le Tour Du Monde issued in 1868. This included various accounts of travel around the world and one of the accounts was that of Louis L. Simonin, a mining engineer who visited Colorado and Wyoming in 1867. This account was accompanied by a number of interesting prints, some based on original sketches and others based on photographs. One of the latter is entitled “Vue de la ville de Denver.” 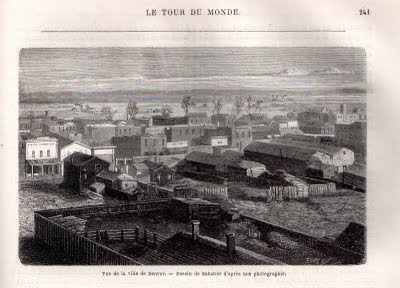 This is an interesting and unusual ‘view of Denver.’ It looks out over the back yards of a number of buildings, which allows only a fairly limited view of the streets beyond. Not what one usually would expect from someone trying to give an idea of the appearance of a city. 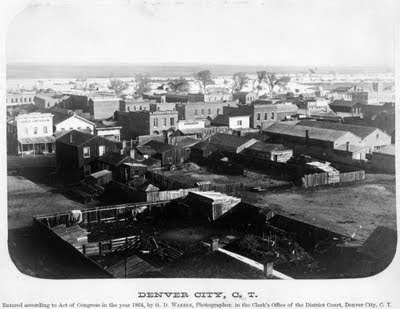 This makes sense if one realizes that it is based on a photograph of Denver which may have been the only image the publisher had access to. The photograph in question was copyrighted in 1864 by one of the photographers from Denver in the 1860’s, G.D. Wakely. The reason that this strangely composed photograph was taken was not to show the backyards and streets of Denver, but rather to show the devastating flood of Cherry Creek, which can be seen in the background of the photograph.

If you look closely at the wood engraving, you can see the flood, though it is impossible to know what you are seeing unless you are looking for it. Why did the publisher of Le Tour Du Monde use this photograph as the one image of Denver in the article? Probably simply because it was available and he may have had no access to any other scene of the city. The Denver Public Library has a number of versions of this photograph, indicating that it was probably fairly widely disseminated, for a photograph, and the wood engraving in the magazine would have distributed it even more widely, though probably to an audience which had no idea about the actual subject matter!

Posted by Chris Lane at 4:47 PM No comments: