We get all sorts of interesting prints that pass through our hands and I have asked our staff, that when we get something they would like to research, to be willing to write a blog on that print. Victoria Koursaros was particularly interested in a fascinating allegorical print engraved by Peter De Jode and issued about 1600. Here is her thoughts in this wonderful allegory:

After a visit to the Philadelphia Art Museum the other week, I was reminded of how much a work of art can have to say. The artist uses tricks of composition, color, symbols, or gestures to communicate with the viewer. Even a simple still life could, in fact, be a vanitas, a reflection of vanity and one’s ultimate mortality. What types of fruits are used, or how much wine is in a goblet, all says something about a life led. So with that in mind, I thought why not dissect some of the prints that we have here in the shop...

One of the best time periods to analyze is the Baroque Era. Situated in between the balanced perfection of both the Renaissance and Neoclassicism, the Baroque was about theatricality and ornamentation. Diagonals break out of the composition, shifting the overall sense of visual balance to that of exuberance. 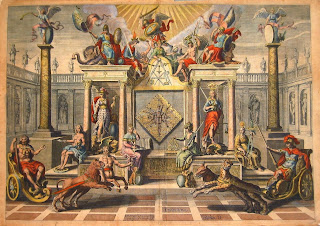 The use of pictorial allegories has been popular throughout most of art history. A figure, usually female, represents a virtue, science, or whatever, indicated by what she is wearing, holding, or doing. It was a way of communicating with the viewer. Saints, Gods, and historic figures also frequently show up as emblems. Here is a prime example of this. Published in the early Seventeenth Century, the lavish double page “Emblema Tabula II,” by Pieter de Jode, is bursting at the seams with allegories and meaning. [ Click here to see large images of this print ] For instance, Perseus’s slaying of Medusa, in the top center, represents not only good over evil but knowledge’s power over the old world’s ignorance and superstition. The Renaissance enabled artists to finally break out of purely religious subject matters and started a renewed pursuit of knowledge. These seeds which were planted in the Renaissance, culminated in the Eighteenth Century’s Age of Enlightenment. As seen here, the iconography is derived from Classicism, not the Bible, and the overall meaning of the image is the strength of the intellect.

To begin with, the horizon line is perfectly centered, thus starting the composition in complete balance. The center emblem seems to represents a mathematical ideal of the human form, similar in concept to Leonardo’s Vitruvian Man. Three figures are broken down by a series of angles and circles, implying that science and mathematics offers equations for ideal proportion and form.

Two female figures stand on either side of the emblem. Justice, with her scales and sword, is on the right and Courage, with her shield and submissive lion, stands guard on the left. In front of them are four seated females. I am not completely sure of their identities, but here are my best guesses. 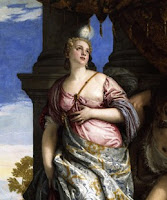 On the far right, is Wisdom. She has a light shining above her head representing the light of knowledge and also is very reminiscent of Paolo Veronese’s “Wisdom and Strength” from 1565. The figure next to her is representative of the Sciences. In one hand she holds a geometric type of apparatus, whilst the other hand is holding a sword with a snake, which is commonly linked to medicine. To the left of her, is History. She sits listening and recording all that is taking place. A partially clothed woman sits next to her. She symbolizes time and life itself; in one hand she holds the hour glass and her foot rests on a wheel. The wheel, being on its side, indicates the chance events of human existence.

In the foreground, are two chariots being pulled by a leopard, dog, lion, and a centaur. The animals, and especially the centaur, represent the unbridled primitive nature of man which can be “reigned in” by the disciplines of the intellectualism. The chariots are driven by Ares (Mars), the God of War with his shield and helmet, on the right, and Hercules on the left, as indicated by his wooden club and lion’s skin. Both of them are representative of strength.

Along the top, is the above mentioned Perseus in mid-slay. To the right of him, are Hermes and Athena, both of whom helped Perseus in that particular task. Hermes (Mercury) is the young man with wings (though, he more commonly has the wings on his shoes) and a helmet. He is the God of Messengers. Athena (Minerva) is the Goddess of Wisdom and War. We know it is her because of her helmet, shield, owl, and olive branch. The small female figure with the winged helmet is a mystery to me. Perhaps she represents Victory, because of her wings and the fact that she is holding a globe. Next, appears to be Hephaestus (Vulcan) as he is the God of Fire. At the far left is, most likely, Bellona, the Roman Goddess of War. Here she sits on an elephant, which is a representation of strength and fortitude.

Seemingly Masonic images abound throughout the print. I cannot be certain these are Masonic, but these symbols certainly point to this interpretation. Most obviously are the craftsman’s tools like the rulers and the compass. Other indications are the checkered floor, the variations of column styles, the bright light shining down at the top center, and the fact that the main element is divided into three sections. The number three is significant because it represents the three degrees of the craft or three stages of personal development. Though Masonry didn’t become really popular until the Eighteenth Century, it did begin to flourish in the Seventeenth Century. The Masonic ideal of knowledge and enlightenment seems to tie in with the overall feel of this print as well.

All of this is, of course, only a beginning! Each stone figure along the top and in the alcoves of the walls is communicating something, as are the two female figures atop the columns (Fame and Fortune perhaps?), and all the symbols engraved into the columns. Still I hope that this brief interpretation will serve as an example of the old adage “a picture is worth a thousand words!”
Posted by Chris Lane at 9:43 AM