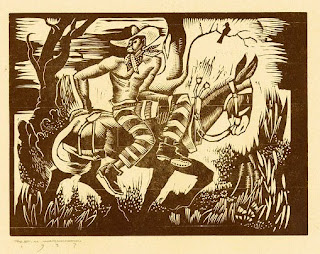 Some time ago, an what seemed to be an exciting find appeared on the market, a collection of woodblock prints from the estate of an unknown printmaker, Earl M. Washington. At the time, this find was described as follows:

Earl M. Washington (1862-1952) was an African-American master wood-engraver and printer who between the early 1900s and the time of his death had amassed and printed from one of the largest collections of artists' wood blocks in the United States. Washington's career began at the age of 13, when he was apprenticed at a Southern printing shop. In 1880 Washington moved to New York, but encountered racial and social prejudice which barred him from employment at the larger printing shops in the city. Eventually finding a position in a small shop on the Lower East Side, Washington went on to perfect his skills as a master printer.

Washington's collection of wood blocks began accidentally, with blocks collected from the fire-ravaged print shop of a fellow-carver and friend. As he continued his printing work, Washington's circle of acquaintanceship widened, and he began to receive blocks from many different artists and publishers. These included the work of Hale Woodruff, (1900-1980) whom Washington met and befriended; Eric Gill, Lynd Ward, Rockwell Kent, M. C. Escher, Robert Gibbings, and others. Washington printed impressions for each of the wood engraved blocks in his collection, and in some instances, he used the designs of other artists to create new engraved blocks. 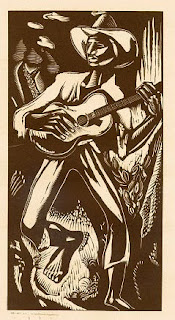 It turns out that this "find" was the result of an elaborate scam perpetrated by this printmaker's supposed great-grandson, also named Earl M. Washington. The evidence is overwhelming that even if the first E.M. Washington did exist and was a printmaker (both uncertain), he was neither the maker nor printer of these prints. Instead it is clear that the maker of these prints is the current E.M. Washington, who made "original" woodblock copies of prints by the famous printmakers who were supposed to be the friends of his alleged great-grandfather. Each of these prints is signed "E.M. Washington," which though said to be by the great-grandfather is certainly the signature of the great-grandson, and they are dated with dates when they were supposed to be printed, a clear misrepresentation.

The current E.M. Washington has spent a lot of time and effort (and I believe still does) marketing these prints to print dealers and at auction (they still come up on ebay). The story changes regularly, but usually the prints are misrepresented as being something that they are not and inappropriate prices are asked or suggested. 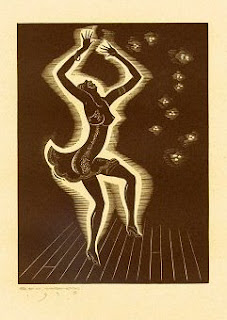 Although these prints were created as part of a scam and do not have the value they might have were the story true, their history is fascinating. This makes the prints interesting and thus some value (not to mention that the images are quite attractive). The eagerness with which they were initially accepted speaks to the growing modern interest in the work of early African-American artists and artisans. Though we know now that they are not what they seemed, these prints are still very good "original" copies of some very fine wood block prints, especially those of African-American figures and subjects. They are lovely images and fun to own, as long as you acquire them knowing what they are and for an appropriate price.
Posted by Chris Lane at 8:00 AM