Prints: Art for a Down Economy

This week I am in France on vacation (yeah!), so I've asked Kelli Lucas for another of her interesting blogs. Here it is: 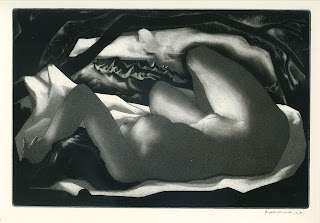 I've been doing some research lately on twentieth century print clubs and have noticed that, though some of these groups were born in the midst of the heady 1920s and survived past the prosperity of the 1950s, their heyday really took place during the spare decades of the 1930s and 1940s. During years when artists needed to sell things and consumers needed to buy things cheaply, prints became the darling of the art world. Looking at the clubs and societies that flourished in those decades is giving me a little insight into long-term popularity of prints and--perhaps--a bit of wisdom for art collectors weathering the current economy.

Since the invention of the printing press, one of the most attractive features of prints has been their inherent accessibility. Produced at a smaller scale than most paintings and in greater numbers, they are inherently easier to possess and display and more affordable than paintings or sculpture. The link, though, between those who make prints and those who would buy them is rarely self-evident; that is, the average, middle-income art collector is not always in direct contact with the average, eager-to-sell etcher or lithographer. Enter the print club. 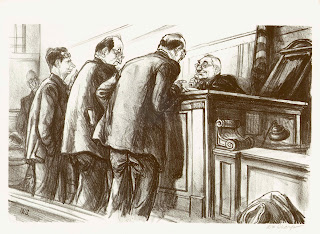 Print clubs and societies have taken various forms over the last two centuries, but they have had at their core one goal: the introduction, in varying degrees, of consumerism to art (and art to consumerism). Chris wrote earlier about the American Art Union, which was really the first such organization in the United States. As the Etching Revival gained steam in the late nineteenth century, groups rose up to support a new generation of printmakers, artists whose primary medium was prints rather than paintings or sculpture. These decades really became a golden age for print clubs, with popularity that peaked during the 1930s. As disposable income plummeted during the Great Depression, artists needed a way to sell their work and collectors needed a way to buy it in such a way that would maximize benefit for both. 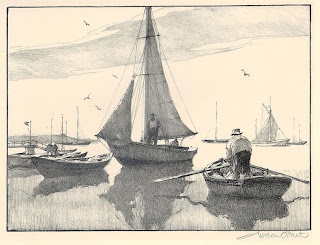 In New York City, Reeves Lewenthal opened a gallery called Associated American Artists, commissioning artists for $200 to produce editions of prints that would sell to the public for $5 per piece. To this day, Associated American Artists prints can be found in print shops and print collections across the country and represent work by such fine printmakers as John Steuart Curry, Frank Bishop, Grant Wood, and others. Other groups, like The Woodcut Society, adopted a subscription structure. 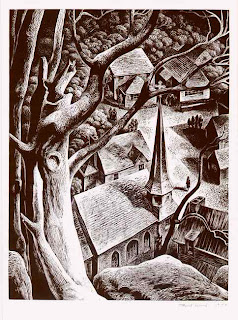 The Woodcut Society was established in 1932 by print enthusiast Alfred Fowler to promote the appreciation of woodcuts and help provide opportunities for American woodcut artists. The society issued 44 prints between 1932 and 1954, some by the best artists of the period. For an annual subscription fee, members were entitled to receive a print from editions of 200, mounted inside a letterpress printed folder with an artist's foreword or critic's essay. Ready to be framed, the prints could also safely be kept in their folder of issue, making the woodcuts they contained even more affordable (as they did not require elaborate, immediate display mounts).

The subject matter addressed by Woodcut Society artists was a wide mix, mainly presented in a representational style. Some artists dealt with Regionalist topics, including men at work in rural settings. Others addressed classical themes like the female nude and still life. Landscapes from New England to Arizona also appeared over the years, as did animals, domestic and wild. 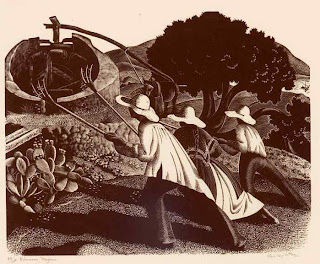 Accessibility was the name of the print club game then, and, to a great extent, still is. The prints from such societies have become highly collectible, depending on the artist, but many are still affordably priced. Though we (of course) are biased toward antique prints, there are still clubs that exist in the same fashion as the Woodcut Society: annual membership dues get you access to some really fine prints. Locally, Philagrafika is doing fine work, but these organizations are thriving across the country. The lesson to learn from the Depression-era print clubs, in my opinion, is that collecting art is not an inaccessible luxury limited to flush economic times. Even when budgets are tight, it is possible to seek and find good art, and chances are that when you start looking, you'll find what you're looking for in a print.
Posted by Chris Lane at 7:00 AM