The paper of old prints

In previous blogs I have looked at the subject matter which appears in old prints, as well as the processes used to make them. Another important aspect of old prints is the paper upon which the impressions are made, so today we’ll take a look at this subject. 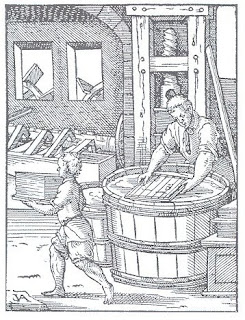 Prints have been made on papyrus, vellum, silk and other materials, but the vast majority of antique prints are made on paper. The quality and content of the paper has varied considerably over the years. Until the nineteenth century, paper was almost exclusively made from rags (primarily cotton or linen) which were soaked and stirred in vats until the fibers separated into a pulpy mixture that could be used to make sheets of paper. In the nineteenth century, wood pulp paper was developed, which used wood fibers. The wood pulp was created either by mechanical means (first developed about 1840) or shortly thereafter by chemical processes.

Rag paper is still being made but today the majority of paper is made from wood pulp, which is easier and less expensive to produce. Rag paper, however, is significantly superior. The fabric fibers are longer than wood fibers, which makes rag paper stronger. Also, wood pulp paper is usually acidic, which causes it to deteriorate over time, and also it contains significant amounts of lignin, which reacts to light and oxygen by yellowing. Rag paper is naturally non-acidic and it will last without deterioration as long as it is properly handled. This is, of course, why prints that are hundreds of years old are frequently found on almost pristine paper, while prints that are less than a century old are often brown and brittle. 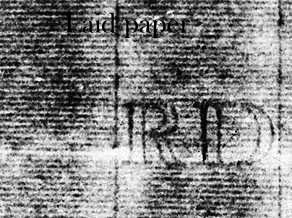 There were two general types of processes used to made the paper pulp into sheets of paper. The first process creates what is called “laid paper.” Laid paper is made by the paper pulp being poured into a mold made of a wooden framework with a wire mesh on the bottom. Laid paper was made by hand and the size of the sheets limited by the practical size of the wooden mold. The way that laid paper can be recognized is by the pattern that is impressed into the paper by the wire mesh. If you hold up a sheet of laid paper to the light, you can see the pattern of the wires (called chain lines), which usually will have very closely spaced lines with crossing lines at wider intervals. 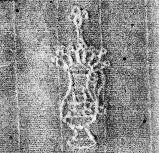 The fact that the wire mesh makes a pattern in laid paper led paper makers to attach wire designs, such as crests, dates or intials, to the mesh. This creates a matching design in the paper, called a “watermark,” and this can be used to help determine the date or manufacturer of the paper used in a print. It should be noted, however, that fake chain lines and watermarks can be put into sheets that are not actually laid-paper. 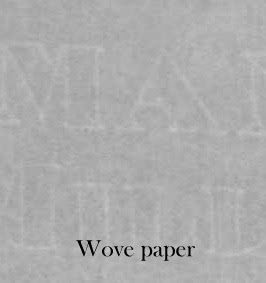 The other main type of paper is “wove paper.” This is mechanically-made paper, where the pulp is formed into paper on a woven belt. Wove paper, therefore, lacks chain lines. Though wove paper was invented in the eighteenth century and laid paper is still produced today, as a rule of thumb it can be said that the majority of prints made prior to 1800 are on laid paper and the majority of prints made subsequently are on wove paper.

Often when talking about a print, a size description will be used. These can be fairly simple, as in “octavo,” “quarto,” or “folio,” or they can be more complex such as “16mo.,” “royal octavo,” “large quarto,” “double folio,” and other similarly confounding phrases. Unfortunately, there is no standard definition of the sizes of antique prints and this can lead to considerable confusion. You can, however, achieve some understanding of these size idioms by learning the origin of the expressions.

The phrases used to describe print sizes originally applied to bound volumes and have since been derivatively bestowed on prints. In the earliest days of printing, the largest volumes produced were made from single sheets of hand-made paper folded once, thus making two leaves, or four pages. These are called "folio" volumes, after the Latin folium, meaning leaf. Volumes made with sheets of paper folded twice, creating four leaves, are called "quarto"; those made with thrice folded paper, forming eight leaves, are called "octavo"; those made with sheets folded four times, producing 16 leaves, are called "16mo."; and so on. This sounds simple enough, except for the fact that the size of sheets of paper varied considerably, creating an equal variation in the size of a folio or quarto or octavo book. Indeed, some quarto volumes are actually be bigger than some folio volumes made from different sized paper.

These book terms have, by common use, been transferred to paper and thus to prints. A folio volume is made from sheets of paper folded once, so a folio print is half the size of a full sheet of paper, and likewise a quarto print is one quarter the size of a full sheet, an octavo print one eighth size, and so on. A print made from an unfolded sheet of paper is called a "double folio" print.

Many prints were made which do not fit neatly into these size categories. Not all prints were made from a sheet of paper to a particular fraction size, and other prints were made from rolls rather than from sheets of paper. Prints which were bound into books often vary in size because of the binders’ propensity to trim pages prior to gilding the ends, and of course there is the issue of different sizes of the sheets of paper. It is helpful that some paper sheets have names for their specific size, so that the prints made from these sheets can be unequivocally identified. For instance, the prints from John James Audubon’s The Birds of America are “double elephant-folio,” those from his work The Quadrupeds of North America are “imperial folio,” and those from the octavo editions of both works are “royal octavo.” Where there is no specific name for the sheets of paper used, general expressions such as "small folio," "medium quarto" or "large octavo" are sometimes used to give a more accurate description of size.

Understanding the history and nature of the paper used in making prints is important, but all these factors make this a fairly complex subject. There are the general rules of thumb, such as the fact that most prints made before 1800 will be on laid paper and most made afterwards on wove paper, but the best thing is to try to build as much experience looking at paper of prints where you know the history of the paper. An experienced dealer or collector can often give an approximate date for a print, or determine the originality of a print, by examining the paper and this is something which it is useful to try to learn for anyone interested in old prints.
Posted by Chris Lane at 8:00 AM