Today's post is by Kelli Lucas and it is about one of the more unusual types of antique "prints": 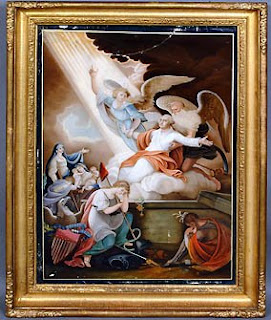 Throughout the eighteenth and nineteenth centuries, printed paper was gobbled up as a consumer good. Cheaply made from inexpensive materials, prints of high and low quality were so ubiquitous in the early Atlantic world as to be nearly superfluous. Sometimes reduced to ephemera, prints nonetheless represented the highly refined crafts and technologies of engraving and printing images. Accessible in both material and subject, prints were the ideal form for manipulation and became fodder for authors of arts handbooks. As one such author, Robert Dossie, noted, glass transfer painting was such a simple endeavor that even those doubting their artistic abilities could attempt it with success. 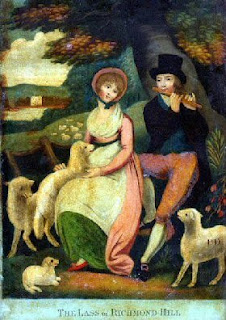 Using readily-obtained art supplies and a commercially available engraving or mezzotint, one could easily mimic fashionable reverse-painted glass, utilizing a painting technique that bears some semblance to modern paint-by-number. After soaking an engraving for a few days (this step varies according to the instructor), the print was laid against the glass. Turpentine (or some variant medium) was then applied until the paper appeared transparent on the glass. Glass and paper were then left to dry, usually for more than one day. Once dry, the paper could be rubbed away with the fingertip, leaving only the transferred ink of the print. To complete the effect, the outlined and shaded design could be colored in with oil paints applied on the verso. Thus transformed, the print-cum-glass transfer painting could be suitably framed and displayed.

With greater detail and prose, Robert Dossie elaborates in Handmaid to the Arts (London: 1753):

Of the taking of mezzotinto prints on glass, and painting upon them with oil, or varnish colours.

The painting on glass, by means of mezzotinto prints, is performed by cementing the printed side of the prints to the surface of the glass, by the assistance of some glutinous body which will not dissolve in water; and then destroying the texture of the paper by water, so that it may be rubbed interely [sic] off from the cement upon the glass; leaving, at the same time, the whole of the ink of the print upon the cement, and glass, in the same manner as if the original impression had been made there; by which method, a complete drawing of the picture designed is obtained on the glass; and may be coloured by the use of oil, varnish, or water colours.

The method of preparing this is as follows.

Procure a piece of the best crown glass as near as possible in size to the print to be taken off; and varnish it thinly over with turpentine, rendered a little more fluid by the addition of oil of turpentine. Lay the print then on the glass beginning at one end; and pressing it gently down in every part in proceeding to the other: to prevent any vesicles of air being formed, in he laying it on, by the paper touching the cement unequally, in different parts; and to settle the whole more closely to the glass, it is well to pass over a wooden roller over it; which roller may be made of any kind of wood turned, and may be about two inches in diameter. Dry the glass, with the print thus laid upon it, at the fire, till the turpentine be perfectly hard; and afterwards moisten the paper well with water, till it be thoroughly soaked. Then rub off the paper intirely [sic] from the cement, by gently rolling it under the finger; and let it dry without any heat: the impression of the print will be found perfect on the glass; and may be painted over with either oil or varnish colours.

The choice and treatment of the colours for painting in this way upon glass, in either oil or varnish, my be the same as for any other method, and it is therefore needless to enumerate any further particulars….

Dossie wrote largely to professional or would-be professional artisans, instructing them on a variety of technical issues, of which glass transfer painting was the simplest. But the ready availability of prints, sold in large numbers and for small prices, meant that they could exist as both finished product and raw material for the aesthetically-minded with leisure time and discretionary income. Accomplished women, especially, were expected to cultivate artistic abilities, including painting and drawing, as well as fine taste for art and style. Not unlike modern so-called “domestic goddesses,” these women were encouraged to use their time and talents to beautify their lives. From embroidery projects to drawing lessons, techniques were perfected in genteel homes to add beauty and refinement to the family environment. Glass transfer painting, which mimicked fashionable reverse-painted glass, was one pastime that retained popularity from the mid-eighteenth century through the mid-nineteenth.

As a process, glass transfer painting is fascinating, as it manipulates one material (paper) to produce something entirely other (glass). Amateur artists who worked with this process began with a finished objet d’art (that is, an engraving) and enhanced its properties, transforming it from ephemeral to substantial. Harder to cast aside and yet vastly more fragile, the engraving was made more precious by its transfer to glass, and more permanent. As pieces of paper, engravings and other prints have always been extremely fluid objects: they can easily be moved from one frame to another, or removed from a scrapbook to be tacked to a wall. For modern collectors and scholars, this ephemeral nature can be maddening: it is often difficult to find information on how prints were displayed and used within their period of production. But attaching a print to glass via transfer transformed the print from ephemera to object, an object that could be more easily preserved, collected, and studied over periods of time. Finding one such object today is a chance to learn about how prints were valued and which prints were particularly prized (presumably, one would not go to the trouble to make a glass transfer painting with an image one did not like). 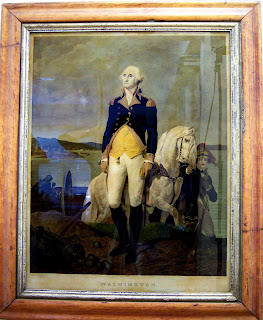 In the last several years, our print shop has handled a small handful of such prints. One was a very fine image of George Washington, engraved by Jean Nicolas Laugier in 1839 after a painting by Léon Cogniet (which, itself, borrowed from Gilbert Stuart for Washington’s head). Its transformation from print to glass transfer painting illustrates a significant fashion in American culture: a penchant for images of George Washington. During his life and following his death, Washington was elevated to national symbol, and his image graced every possible object from water jugs to neckerchiefs. It is not surprising, then, that this particularly noble-looking portrait of the first president should be applied to glass, offering it a more permanent existence. 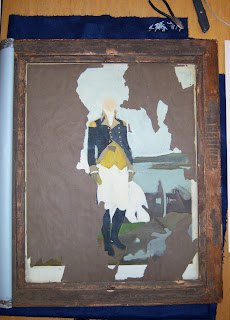 While we had the print in our shop, I took advantage of the opportunity to study it inside and out, hoping to learn more about the method itself. Looking on the back of the glass revealed a surface that reminded me of a modern paint-by-number picture. It reinforced Robert Dossie’s assertion that glass transfer painting was a practice that could be “very alluring,” as it allowed for “the production of pictures even without being able to draw” (Dossie, Preface, Handmaid to the Arts). The application of paint was done neatly, but without any great apparent skill. 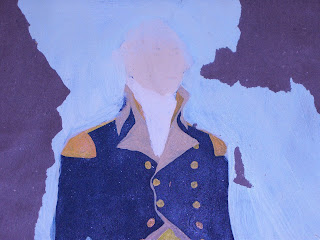 The finished result, though, was quite impressive in its period frame. When imagined hanging over a fine Empire sideboard, with its polished brasses and gilt ornament, the picture looked sophisticated, indeed. We thoroughly enjoyed having it in the shop and look forward to finding other examples of this intriguing process.
Posted by Chris Lane at 8:00 AM

Labels: Interesting prints, What is a print