At the end of June, Antiques Roadshow taped in Raleigh, North Carolina, the second stop in the 2009 Summer Tour. One never knows what to expect from any of the many stops of the Roadshow tour, and it is not unusual that more interesting things come in at some of the smaller cities than at the larger ones. From my viewpoint, Raleigh proved to be the most interesting stop of all my thirteen years working as an appraiser for the Roadshow.

At every stop for Antiques Roadshow the appraisers at the Prints & Poster table see a wide range of prints in terms of quality and interest. The variety of prints that come in to be appraised fairly closely matches the range of prints that exist in the “real world”; there are far more prints that are reproductions or inexpensively produced prints intended for decoration than there are finer, historically important prints. As discussed in an earlier blog, this does not mean those prints do not have value, but they are prints we have seen many times over the years and which do not get the appraisers terribly excited.

Raleigh was typical in that the majority of prints were of the more common, decorative sort. I mentioned in my previous Roadshow blog that in most cities we tend to see one particular type of print that comes in more often there than at our other stops. However, I cannot say that that was the case in Raleigh. There were all the usual suspects (tourist etchings from the early 20th century, etching revival landscapes from the 1890s, sepia collotypes copied from paintings in the first decade of the 20th century, Currier & Ives copies, museum reproductions of paintings, and the like), but no particular single type that we saw in Raleigh more than usual.

What was unusual was the number of prints and maps that were of particular interest to me. I have been in the print business for over 25 years so I have come across thousands of types of prints. It is rare that something I haven’t seen fairly often comes in to the Roadshow (though, thankfully, interesting prints that are worth taping come in regularly), but in Raleigh I was surprised by how many such prints did come in. I will not discuss what was taped since it will air on the program next season, but there were some wonderful things I saw in Raleigh which were not taped. 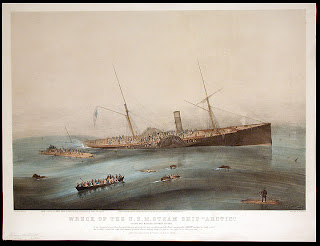 One print which came in right at the end of the day was a large folio N. Currier print of the “Wreck of the U.S.M. Steam Ship ‘Arctic.’” This is a terrific large folio print, but what was exciting was that it was brought in by a descendant of James Smith, one of few passengers to survive and the artist whose sketch was the basis for the drawing by James E. Butterworth from which the lithograph was made! Not only did his great-grandniece have an original example of the print, which had come down to her from Smith, but she had all sorts of supporting documents, such as a book written by the artist of his experiences in the disaster, a photo of the artist, and a number of other fascinating documents. Pretty cool stuff.

Another impressive print which came in was an original John James Audubon print of the “Sea-Side Finch” which was said to be a gift from John James Audubon to a natural scientist who was a friend. We do not have the time while appraising at Antiques Roadshow to do any serious research, so I could not verify what the owner told me, but there was considerable, plausible evidence that this print was an early state of the print, hand-colored by Audubon himself, and given as a gift to this naturalist. Again, pretty cool.

What amazed me, however, was that I saw two prints that I had never seen before. While there are many book illustrations and ephemeral-type prints I haven’t seen, there are not a lot of large-sheet prints of note that I haven’t come across in the many years I have been in this business. To have two turn up in Raleigh was really exciting. 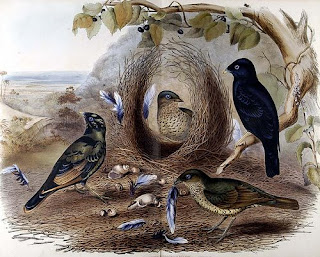 One of these was a double page bird print by John Gould. This was a complete surprise for me as I had no idea that Gould did a double page bird print. Almost all of Gould’s 2,999 different prints are folio prints, single pages that were issued in his many works. However, in his Birds of Australia there were a few double page images, including the one that was brought in to the Roadshow. I am sure most of my colleagues in Australia and England (where more of these prints turn up) would know this, but it was a surprise to me and also to the other print appraisers at the table. Not earth-shattering, but one of the things I enjoy most about doing appraisals for Antiques Roadshow is being able to learn new things.

An even bigger surprise was to come across a wonderful emancipation proclamation print published in Tuscaloosa, Alabama. This was a surprise because Lincoln prints are one of our specialties and I almost never come across a major Lincoln print I haven’t seen before. I hadn’t come across this print in person or in a reference book, but it turns out that an example is in the Alfred Whital Stern Collection of Lincolniana at the Library of Congress.

The print contains the text of the proclamation, with an image at the top of Lincoln either handing the document to or receiving it from an angel (“The Hand of God in Freedom”), while at the bottom are two vignettes. The one of the left shows a slave in a cotton field and the one of the right a black member of Congress. The print was printed by the Enquirer Job Printing Company of Cincinnati, but was published by A.B. Daniel in Tuscaloosa. There is text at the bottom saying that “Agents Wanted,” so it is possible that this print was issued to advertise a book on the topic (I have not been able to locate any such book). In any case, another wonderful print that came as a surprise to me.

These are just some of the interesting maps and prints that came in to Antiques Roadshow in Raleigh and none of them ended up being taped. And of course, there were hundreds of not-so-wonderful prints that also were not taped, though all received a verbal appraisal from myself or the other appraisers at the Prints & Photographs table. So how do those items which are taped get selected?

Each appraiser spends about 11 hours sitting at a table looking at item after item in their specialty, giving each owner information on the history and value of their lamp, broach, book, vase, print or whatever. If something comes in that an appraiser thinks might make a good appraisal for the program, he or she starts the process by calling over one of the producers.

An appraiser can judge an item is worthy of taping if the manner in which it was acquired is interesting, its history is unusual, its value substantial or it is just an exciting piece. Basically the appraisers are looking for things which will be of interest to the television audience. If the appraiser thinks the item would make “good TV,” then no information of the item is given to the owner at the appraisal table, but instead a producer is called to look at the item, hear the tale from the appraiser, and talk to the owner.

If the producer agrees with the appraiser that the item should be taped, then the owner goes off to the “Green Room” to get made-up and to wait until it is time to tape the appraisal. Up to this stage the appraiser has not had time to do any serious research, but once the decision is made to tape, the appraiser can do some research to pin down a particular fact or get a bit more context on the item. The appraiser then goes before the cameras and gives the owner an appraisal in one go. Those appraisals are not staged; what you see on air is how the appraisal happens in real time.

From what I have written above it is clear that some really nice items do not get taped. Why not? There are many reasons. Often, the owners knows too much! In the age of the Internet and Google, owners can often find out a lot about an item before they bring it in. It is much more interesting for viewers of the program if an owner is learning something new in an appraisal, as opposed to if they are just being told what they already know. Because of this, it is not unusual for something of great interest not to get filmed because the owner was too knowledgeable. Other reasons that items don’t get taped are that similar items might have been already shown on a previous show or that the item is not owned by the person bringing in it (an on-air appraisal can be given only to the owner of the object).

All these reasons for not taping an item make a lot of sense, though it sometimes seems a shame that something does not get taped. However, I can tell you that everything brought in to Antiques Roadshow does get a verbal appraisal. All the appraisers are aware that the owners put in a lot of effort and spend a lot of time to bring them down to the event. We all make it a point to give as much information as we can for everything brought in, whether it is worth $5 or $50,000, and whether it is selected for taping or not.

Sometimes if you watch the Raodshow you might think everything that comes in is valuable or has an interesting story, but if you watch the “Feedback Booth” segment at the end, you get a sense of how many items that are brought in are not that interesting nor that valuable. I hope you also get a sense of how even people whose items are not that valuable still get a good appraisal and have a good time.

The appraisers also have a good time and in Raleigh I not only had a good time, but I also saw some really cool things and even learned quite a bit. The next three stops on the 2009 Summer Tour are in Madison, Phoenix and Denver, and my partner, Don Cresswell, will represent us there, so I won’t be back at the appraisal table until the last stop, in San Jose. I can’t wait to head out west and hope I’ll see even more interesting things then…

As a reminder, if you would like to see some of the archived print appraisals from Antiques Roadshow, by myself and other appraisers, you can find these on the Roadshow web site.
Posted by Chris Lane at 7:00 AM