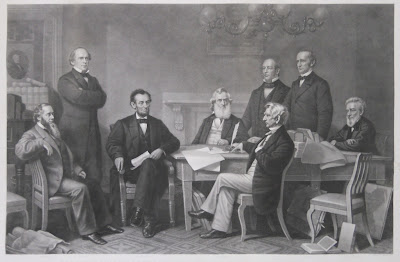 Carpenter's Emancipation Proclamation
Because prints are printed from a physical matrix made of wood, metal or stone, all of which can be modified (some more easily than others), there are often print variants created by a modification to a matrix for some reason or other. Some of those modifications are because an error was made.

A nice example of this is Charles Fenerich's print of the Washington Monument. The original version of the print misspelled "Washington" as "Wasihngton," but once this was realized, the lithographic stone was correct to spell the city name properly. Early, mistaken versions of prints are often appealing to collectors, but this print was the object of either a complete miscalculation or a scam, for back in 2002 an owner of the first version was trying to convince people his print was worth $2 million! (I wrote about that story in an earlier blog)

This blog was prompted by a close inspection of one of my favorite prints which we just acquired, Francis Carpenter's engraving of Lincoln reading the Emancipation Proclamation to his Cabinet (shown at the top). This is a print which I have handled probably six or seven times over the last three decades and it wasn't until today that I noticed what is clearly the correction of an error in the engraving. 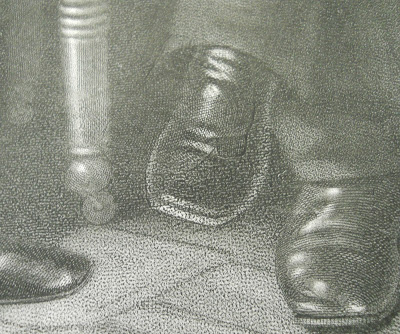 If one looks closely at the engraving of Lincoln's left foot, one can see the faint outline of a different shape for his boot. The boot seems to have been originally engraved so that it was turned a bit towards Lincoln's right, but the finished engraving has the boot coming fairly straight ahead. This ghost image is the result of the steel plate not being completely smoothed out before it was reengraved with the new boot. One can only speculate why the boot was changed--probably a proof was run off and the boot just didn't look right--but this ghost image is an interesting shadow of the process of making a print like this.

An interesting question is whether this print was ever issued with the original boot. I have checked every image I can find and have not seen one before the correction. It is, of course, possible some were run off and exist somewhere. It would be fun to find one of these sometime, and there would be a premium in value for this "first state" (if it exists), however, I think that value would be well less than $2 million...