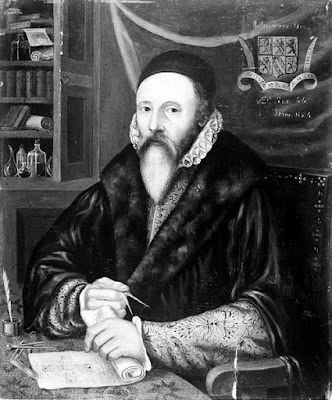 John Dee (1527-1608) was an English alchemist, astrologer, astronomer, mathematician, and practitioner of the occult arts. He lived at a time when the occult and science were just beginning to be separated and Dee had a foot firmly planted in both worlds, being an expert in both arcane and scientific knowledge. 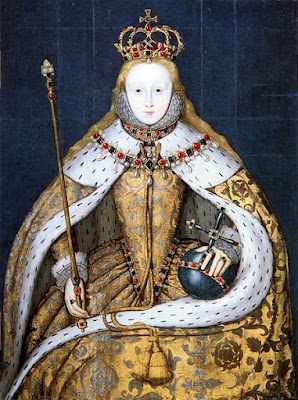 His erudite and wide-ranging abilities gave him a prominent place in Elizabethan England; he served periodically as Queen Elizabeth’s advisor and tutor, and he was well connected with, among others, William Cecil, Sir Philip Sidney, Robert Dudley, and Sir Humphrey Gilbert.

In the 1570s, the Elizabethans had turned their eyes to the lands and seas west of the British Isles. Martin Frobisher was seeking a passage around the norther end of North America—-the famous Northwest Passage-—and Sir Humphrey Gilbert was applying for letters patent to colonize the continent north of the Spanish in Florida, which he received on June 11, 1578. Dee was an important figure in the world of Tudor geography. 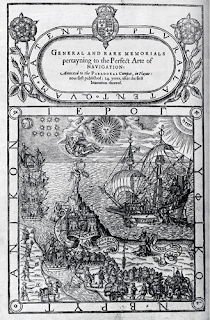 For an extended period, from about 1551 to 1583, Dee was an advisor for English voyages of discovery, to the Northeast and to the Northwest, including for the Muscovy Company. He helped to instruct a number of notable English captains, including Richard Chancellor, Stephen and William Borough, Martin Frobisher, Humphrey Gilbert, John Davis, and Walter Raleigh, and he may have been an advisor for Drake's voyage around the world. His 1577 Perfect Arte of Navigation (more a geography and propaganda for the English empire than a science of navigation) was originally intended as part of a larger work, a general history of discoveries.

Interestingly, Dee actually coined the term “British Empire,” though in his case “British” referred to the earlier inhabitants of the islands, for he argued that the mythical Prince Madoc had discovered North America, establishing first rights to the continent for the English. 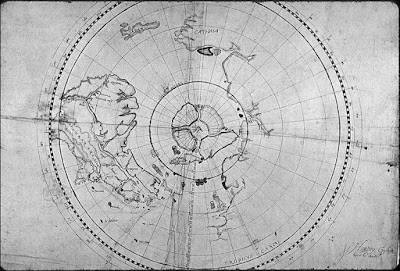 Dee was also a cartographer, having studied with the great Gerard Mercator. He drew a number of manuscript maps, including one of the North America in 1580 for Queen Elizabeth. About 1582, he prepared a map of the northern hemisphere with a polar projection for Humphrey Gilbert (shown above). His depiction of the North Pole was based on Mercator’s map of that region, about which Mercator had written to Dee in 1577, explaining his sources. The rest of the map seems to be drawn for propaganda purposes, promoting various possible ways to sail to “Cathaia,” which is shown opposite Great Britain. The map depicts various open waterways to the East, including routes north of both Scandinavia and Russia, and North America. 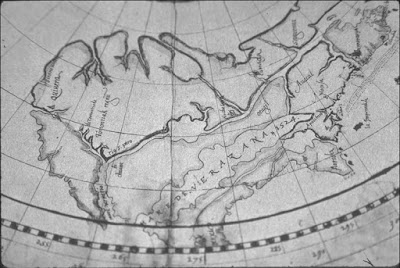 The most extraordinary part of the map, clearly demonstrating Dee’s fixation on water routes, is the rendering of North America, which is a veritable Swiss cheese of rivers and lakes. Dee shows the Sea of Verrazano, approaching very close to the Atlantic in the region of Virginia, but there are also numerous other waterways interlacing the continent. He shows a very early version of a non-existent lake in the southeast, with a river flowing into the Atlantic, with two other rivers entering this lake on its western shore: one connecting the lake with the Gulf of Mexico and one flowing all the way from northern Mexico. To the north of the Sea of Verrazano flows the St. Lawrence, a branch of which connects to that sea and another of which flows to a large gulf on the northern coastline of the continent.

To the west of Hochelaga (where Montreal is today) is a large lake, out of the west of which a river extends to the northern end of the Gulf of California. Interestingly, another river extends from the Gulf of California to the northwest, while a river on the northwest coast of America flows to the east past the mythical city of Quivira, reaching toward, but not quite meeting the other river. Whether these rivers actually meet is left somewhat vague, perhaps Dee hinting at the notion of California as an island, which wouldn’t be definitely shown on maps for another four decades.

Dee’s map shows the geographic notions floating around England at the end of the sixteenth century. Part of the reason they wanted to settle North America was to have a base for the believed-to-exist route to the Pacific, and looking at this map this makes a lot of sense. Of course, they were quite wrong and it wasn’t too long before the English focused most of their attention on the search for the Northwest Territory. However, the concept of a more southerly water route across the continent did not die for several centuries yet, next being taken up by the French and their search for a ‘River of the West.’