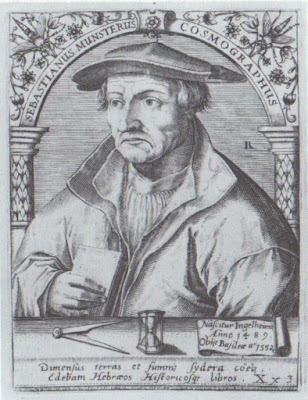 Sebastian Munster (1488-1552) was one of the most influential mapmakers of the sixteenth century. He was born in Hessen, Germany, studied in Heidelburg and Tübingen, and finally settled in Basle, where he lived the rest of his life. Munster was a cosmographer, theologian, mathematician, professor of Hebrew, and geographer. His output included separate sheet maps, maps for other’s publications, but he is best known for his many editions of Ptolemy’s Geographia, beginning in 1540, and of his own Cosmographia, beginning in 1544. These volumes were very popular and influential, running through many editions, with the latter published until well after his death. 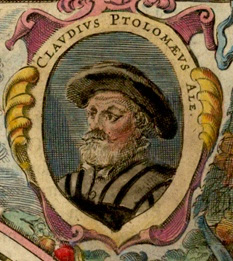 Claudius Ptolemy was the librarian at Alexandria in the Second Century A.D. who wrote two major works, one of which, the Geographia, was the first world atlas. It consisted of Ptolemy’s compilation of all known geographic information, including instructions for how to make maps. Rediscovered in the middle ages, Ptolemy’s Geographia had a huge impact on man’s understanding of the world. Such was this influence that even in the sixteenth century, when Ptolemy’s geographic conceptions were known to be wrong, maps based on his depictions were issued time and again. 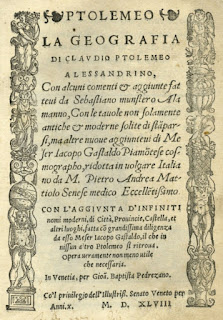 Munster’s edition of the Geographia, contained 48 woodcut maps, including the Ptolemaic maps of the world and its parts, to which Munster added “modern” maps showing the latest information available in the first part of the sixteenth century. Thus for both the world map, and many regional maps, Munster included a geographic image which was 14 centuries old and one which was “up-to-date.” Other geographers did this as well, but Munster was innovative in being the first to include a separate map of each of the four known continents, a feature of atlases which soon became standard. Munster’s Cosmographia was a compendium of all the information he felt important about the cosmos, featuring details on the history, flora and fauna of all parts of the known world. 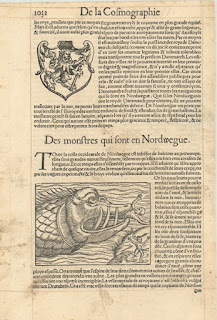 The work included woodcut views and maps of countries and cities around the world, and it is filled with a multitude of small woodcuts showing portraits, animals, plants, sea monsters, and much else. 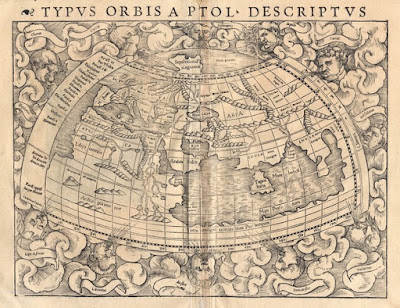 So, let's look at some of Munster's output... Above is the Ptolemaic world map from the Geographia. It shows the typical artistic design of Munster's maps, in this case with the twelve "winds" shown around the edges. The map shows the world as the ancients thought it was in the time of Ptolemy, so there is no "New World," just Europe, Asia and Africa. Note that Africa connects with Asia along the bottom of the map, making the Indian Ocean landlocked. 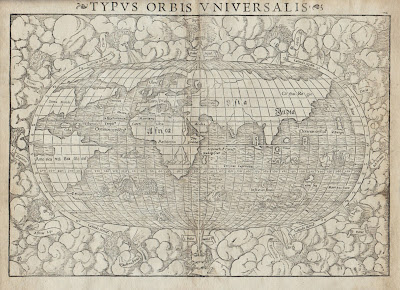 Look at the difference in this map, which shows the world as understood in 1540! The Americas are shown and Africa now has approximately the right shape. Still, the map has its echos of the past, still showing the winds around the edge, and its oceans filled with sea monsters. It is fascinating to realize that both of these maps were issued in the same atlas! 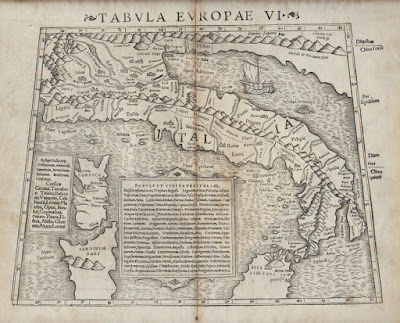 This double imaging of places happened not just for the world, but also for regions. Here is Munster's map of Italy, as known in the time of Ptolemy--in this case quite accurate as much was known of the peninsula in ancient times. 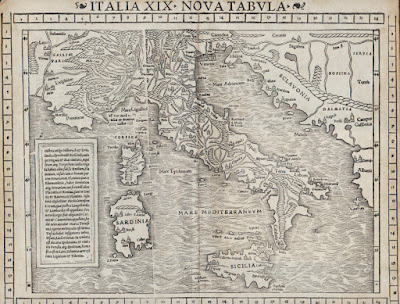 The map above was issued in the same atlas as the map above, with no comment made about which is better. 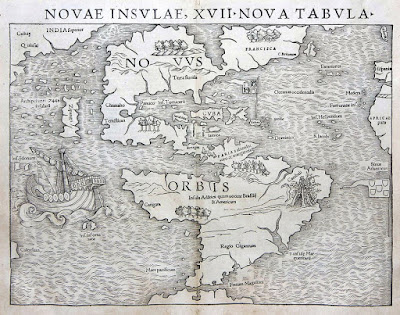 As I mentioned above, Munster was the first to include separate maps of all the known continents, such as this map of the Americas. This map is even more important, as it is the first time the "New World" had been shown in a map as a single landmass. The map is a delight, with a great representation of the cartographic myth of the "False Sea of Verrazano"--that curious indentation in the northern part of North America--, as well as showing Magellan's ship, the Victoria sailing across the Pacific Ocean and including pictures indicating the cannibals of the New World.

The views of the cities in the Cosmographia, on the other hand, were all modern renderings, mostly based on first-hand knowledge. These are some of the earliest, and most decorative, views of European places. 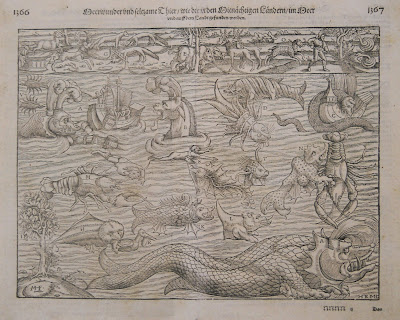 I cannot do a blog about Munster without mentioning my favorite of all his work, his compendium of Sea and Land Monsters. Here Munster shows all the known monsters of the world, including those of the oceans and of the ‘unknown’ lands beyond the edge of civilization. While most intellectuals of the late sixteenth century treated the existence of these monsters with skepticism, many still believed in their existence and the issue was certainly not completely decided. As Munster’s Cosmographia was a description of the whole world, this print of monsters was needed to make the work complete. Across the top of the image are the land creatures, including a gluttonous bear. Below are the “Sea Wonders.” We are most fortunate that Munster included the print, for it offers us a unique glimpse of Renaissance attitudes towards those ‘unknown parts’ of their world.