The start of the Civil War and Flag Mania 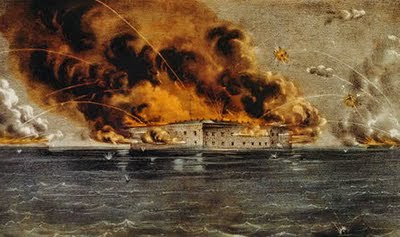 One hundred and fifty years ago today, the first battle of the Civil War began, launching a conflict which would consume four years, over 600,000 human lives, and millions of dollars of resources. It is one of the defining events of American history and, not surprising, was well documented in contemporary prints (I have created a special section on our web site on this topic, A Nation Divided). 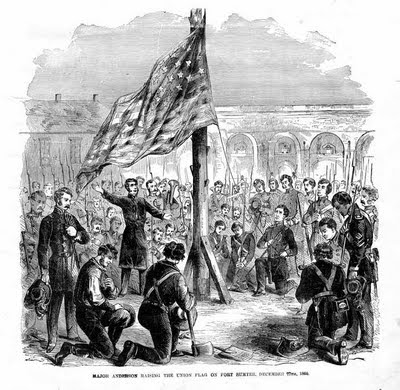 The Civil War began with the Confederate attack on Fort Sumter in April of 1861. The Confederates demanded the surrender of this fort in the mouth of the harbor at Charleston, S.C., but they were refused by the Union commander Major Robert Anderson. The Confederates opened fire on the fort on April 12, 1861, continuing to hail canon balls on Fort Sumter for 34 hours straight. The besieged garrison proudly flew the American flag over the fort throughout, until Anderson was forced to surrender at 2:30 on the 13th. The Union forces evacuated the fort, but Anderson saluted the flag as it was lowered and carried it with him as he left. It was later hoisted to the mast of their ship as they returned defeated, but unbowed to the North. 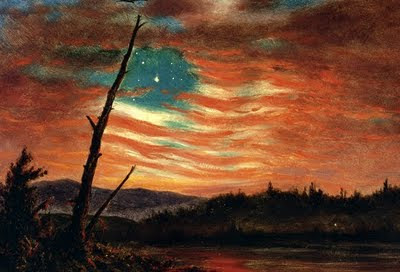 This attack on the United States and its flag caused a swell of patriotic fervor in the North which tended to focus on the flag as a symbol of the Union. As the editor of Harper's Weekly put it, "the flag of the United States is the symbol of the Government which secures and protects him in all his rights and interests..." (May 4, 1861, p. 274) Henry Ward Beecher gave a famous talk glorifying "The National Flag," in which he stated that "The stars upon it were to the pining nations like the bright morning stars of God, and the stripes upon it were beams of morning light." This image was taken up by American artist Frederic Edwin Church, who painted a small oil entitled "Our Banner in the Sky." In that oil, the American flag was formed by a field of stars in the evening sky, the colors of the sunset forming the stripes, and a tree trunk forming an apparent staff for the celestial banner. This painting was soon turned into a chromolithograph by Goupil & Co. 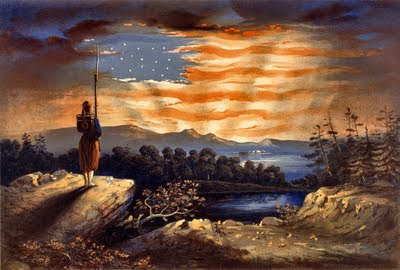 As copyright laws tended to be ignored, and as "flag mania" was raging, publisher William Schaus had artist William Bauly modify Church's image somewhat in order to make his own chromolithograph, entitled "Our Heaven Born Banner." The print was accompanied by the text of Joseph Rodman Drake's poem, "The American Flag," which describes the stars and stripes formed in the sky. In this print, a Zouave sentry looks out towards the celestial banner dawning over the hills, near which is seen Fort Sumter lying before Charleston. The sentry's rifle and bayonet form the flag's staff. 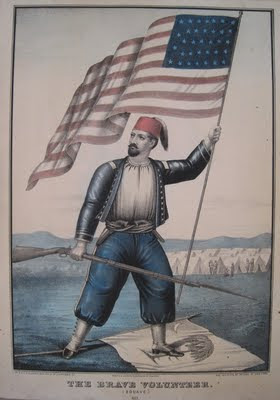 Printmakers in the North were quick to take advantage of these popular feelings by issuing a number of stirring patriotic prints featuring the flag. One of the earliest prints of this sort was issued by the Kellogg firm of Hartford. Their print shows the "brave volunteer" before an encampment and holding a rifle and the American flag. The volunteer is shown trampling on the flag of South Carolina. That flag was first adopted on January 28, 1861 and the focus on the flag of the first seceding state shows that this print was issued probably shortly thereafter. 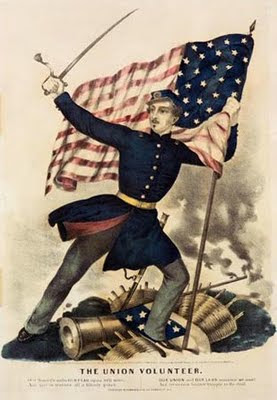 Within short order, a print copied from the Kellogg's image was issued by the New York competitor to the that firm, Currier & Ives. This print has a similar title and is much the same image, though their print has the soldier stepping on the Confederate "Stars & Bars," an indication was issued a bit later when the focus was more on the Confederacy as a whole rather than just South Carolina. 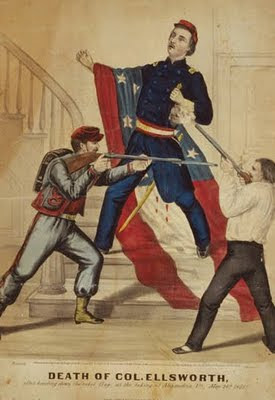 Within little over a month, Currier & Ives were able to merge the flag theme with an image of the first Civil War hero to die for the Union cause. On May 24th, when Union troops were sent into Alexandria, Virginia, Col. Elmer E. Ellsworth went to the roof of the Marshall House Inn to remove the large Confederate flag which had been flying there, well within sight of the White House. The owner of the inn, James Jackson, who was a avid slavery supporter, took exception to this and shot Ellsworth with a shot gun, killing him instantly. Currier & Ives issued this dramatic print which further raised patriotic feelings and prolonged the nation's "flag mania." 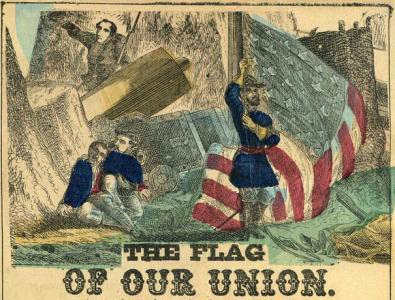 Though the Ellsworth print showed a tragic event, most of the flag prints were positive and intended to be inspiring. These prints were wide spread and popular, but they were all issued early in the war. As the Civil War stretched on and its true horror became apparent, these prints lost their appeal and printmakers turned to other themes.
Posted by Chris Lane at 6:00 AM