Most people who have antique prints have them in frames and many of the prints you run into at auction or in shops are framed. My focus is always on the value of the prints themselves, but surely the frames for these prints add value to the prints, right? Well, that question is actually fairly complex.

First off, as a rule our shop does not usually add any cost onto a print we have framed versus one that is unframed. So if we happen to have two examples of the same print, one framed and one unframed, they will usually be priced the same way. The main reason for this is that a lot of times someone wants a print that is in a frame but doesn't want the frame. If we added on for the value of the frame, then we would be obliged to knock off that cost if we sold the print unframed and we would end up with an empty frame that was not of a lot of use to us. The way we do it, you can take the print in the frame or out of the frame for the same price, and most people take the print framed and so we are not left with a lot of empty, relatively useless frames. 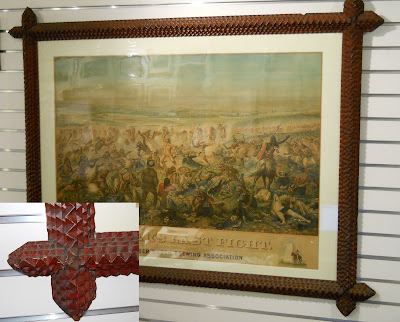 There are, of course, exceptions to this. If the frame is a really nice "period" frame (perhaps original) or if the frame is particularly wonderful (like the tramp art frame on our Custer's Last Stand print), then we do add onto the price of the print. However, this is the exception rather than the rule.

What this means is that we also do not pay extra for the frames when we buy the items. A number of people will bring us a print and expect to get extra for their frame, but as we won't charge more, we won't pay more. We also tell people they are welcome to keep their frames, but usually the people selling just want to get rid of the whole thing.

This can be very disappointing to people and it seems like it is unfair. As anyone who has had a print framed in the last decade or so knows, framing (especially museum standard framing) is very expensive. The frame for a moderately priced print is often more than the print itself, so how can it be that when you go to sell the print in the frame, you get nothing for the frame?

Well, there is a big difference between buying something "as is" and going out and having something made exactly as you want. If you are selling a print in a frame, the potential buyer has to take that frame or nothing. It is likely not the style, size, color or whatever they might have chosen; it just is what it is. People will usually not pay as much for something like that both because it probably isn't exactly what they want but also because it is a take-it-of-leave-it fait accompli. If someone is ordering a frame, they get just want they want and are having someone make it specially for them. It is much like buying an off-the-rack jacket vs. having a tailor make one specially for you. An existing frame just doesn't have that much value to buyers in the market.

And there is the other issue of whether the framing is "museum quality." A large majority of the antique prints framed today are in frames that are actually causing them harm (this is discussed in another blog). Not only is a buyer of such prints getting a frame that they didn't choose, but the frame needs to be taken apart and put back together to preserve the print.

Now it is true, as I said above, that there are frames which do add to the value of prints, but generally it is wise not to pay extra for a frame. If you really like the frame, ok, but it is also important to see if the framing is museum quality, for if it is not, you will be adding quite a bit of expense to the cost of the print (assuming you want to preserve it) and need to factor that in. There are actually a lot of cases where the framing can actually cause the print to be worth less! And finally, if you are looking to sell framed prints, don't expect to get extra for the frames. It just isn't the way things work.
Posted by Chris Lane at 12:23 PM