A Cabinet of Curiosities

In my last blog, I wrote about what I call “novelty prints.” These are prints that were not intended to present a straight-forward picture, but that are unusual in the way they were intended to be used or viewed. About a year ago I came across a web site for a fabulous collection of such prints, The Richard Balzer Collection. 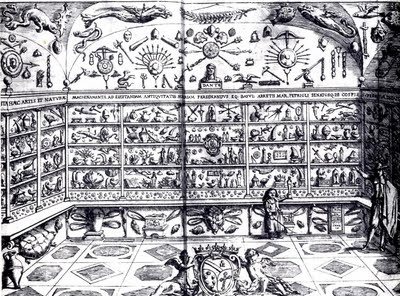 Dick Balzar collects all sorts of novelty prints and this web site is what he calls his Wunderkabinett, that is, his cabinet of curiosities. As he says in the introduction to his site, “Nearly five hundred years ago European collectors arranged their pieces in cabinets of curiosities (Wunderkabinette) in an attempt to display their rare pieces. As collections grew, the more ambitious set aside rooms called Wunderkammern (Rooms of Wonder) for visitors to come and view their collections. These were the first museums. Today, the internet allows the possibility of visiting museums without leaving one’s home, and similarly, the possibility of constructing a virtual Wunderkabinett -- my cabinet of curiosities." 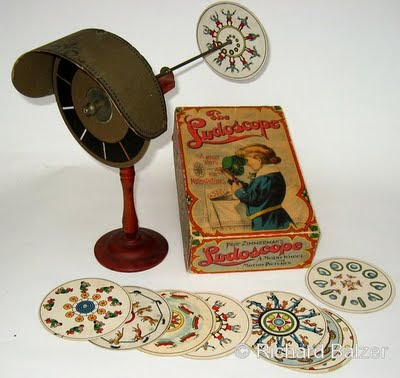 Dick calls the theme of his collection “visual entertainment” and his collection includes the types of novelty prints I have already discussed (perspective views and horizontoriums), as well as many others such as “magic lanterns, peepshows, shadows, transparencies, thaumatropes, phenakistascopes and a variety of other optical toys.” The site focuses on “the presentation and cataloguing of these wondrous devices and their representation in a variety of forms from scientific tomes to representations in the popular culture of the period.” I have spent many an hour browsing through the site and it really is a Wunderkabinette!

As I find this topic of great interest and as this is the best collection of these prints I know of, I asked Richard if he would consent to an interview, which he graciously agree to: 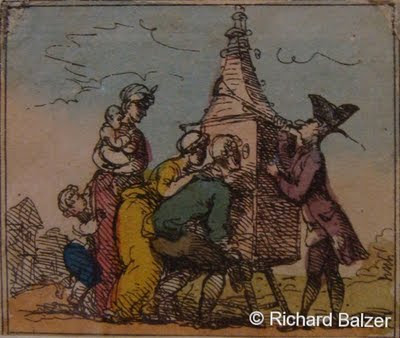 Can you describe the character of your collection?

I like the idea that a collection has a character as well as a theme. The theme of my collection is easier to describe; it is visual media and is almost exclusively pre-cinema (before 1895). The three biggest areas of concentration of the collection, and each encompasses a wide variety of materials from objects to ephemera, are magic lanterns, peepshows, and optical toys. As to the character, it’s a reflection of the collector, a bit chaotic and eclectic. 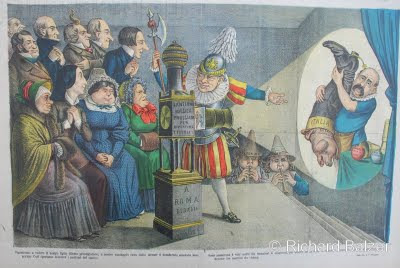 How did you get started with your collection and what inspired you to start?

I came to collecting rather accidently. I was living in Oxford, England on a research grant and one weekend I went to an auction, something I had never done before. I was drawn to a set of photographic magic lantern slides from the 1880s that depicted daily life in China. The slides came with a beautiful but rather beaten up mahogany lantern, which I knew nothing about. No one else at the auction seemed interested so for 50 pounds (about $80) I bought the slides and the lantern.

A month later a friend told me someone was giving a magic lantern show in Birmingham, about an hour and half drive from Oxford. I went to the show, not expecting much, and was overwhelmed by a magical menagerie of painted circus figures gliding across the screen. Mike Simkin, the showman, really started me on collecting. After the show he invited me back to his house, and once I saw the treasurers of his collection I was hooked.

How big is your collection?

The English have a lovely turn of a phrase which is, “I have a modest collection”, which doesn’t exactly do justice to its size. 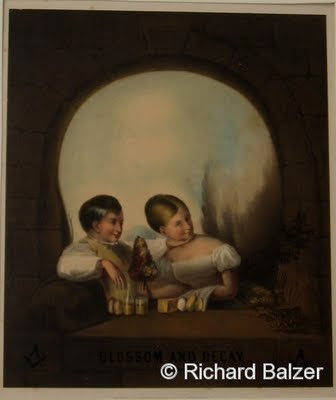 When were the objects in your collection made? 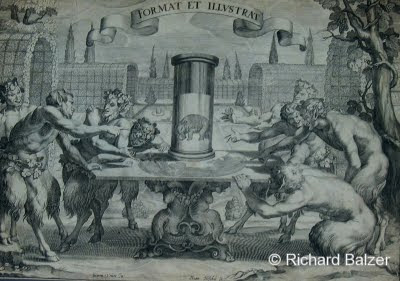 In what countries were your objects produced?


Items in my collection come from a wide variety of countries. I have shadow puppets from China, India and Indonesia. I have several wonderful prints from Japan and some peepshow related material from Russia. The largest country, as a contributor to my collection, is America accounting for probably 60% of my collection, not because it is the place with the most material but because it is my home and there are fewer collectors here collecting what I collect. Europe has more material but it also has more collectors seeking the material. Over the years, having lived in England and traveled extensively in Europe I have been fortunate enough to find a lot of material, particularly in England and France, although I’ve also found things in Germany and the Netherlands. Once I was lucky enough to buy a collection of leather skinned shadow puppets from a street vendor in Beijing. 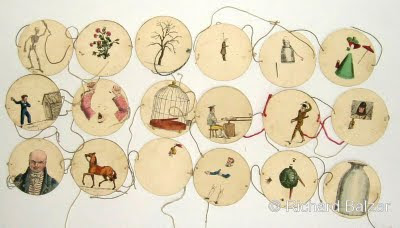 What are your favorite types of objects?

I hate this kind of question because it suggests that in any collection there should be favorite types of objects. It would be easier for me to tell you about twenty favorite objects than four. If you asked at this moment (and of course this could change tomorrow) some of my favorite types of objects, I would say: Anamorphoses, Thaumatropes, Peepshow Boxes and Magic Lantern Prints. Writing this down I recognize that I didn’t mention peepshow prints, something that I wrote about in my book, Peepshows A Visual History.

If you asked what the most distinctive part of my collection is I would have said prints. Both the magic lantern, and peepshows were important visual icons of the 18th and 19th century and new (old) images keep turning up, which is a wonderful thing for a collector. 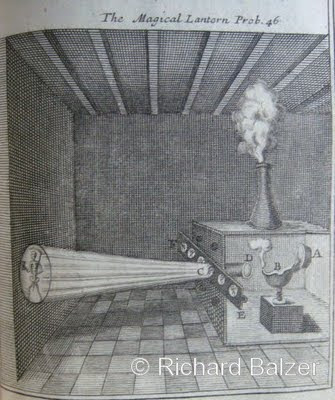 Actually I am not so interested in pictures of the items themselves, but I am very interested in images that contain the objects. This probably isn’t very clear so let me say there were a lot of political prints, especially at the end of the 18th and throughout the 19th century where the peepshow and the magic lantern were used by artists to poke fun at particular politicians, royals or the government. Some of my favorites show a peepshow and an unsuspecting person bent over looking at a view while his pocket is picked. The person depicted looking at the show represents “the people” and his pocket is being picked, depending on the image, by a politician or the state.

If I keep saying I am very interested in something it will soon become apparent that I am interested in a great many things. One of the real joys of collecting for thirty years is that as you learn more about a subject, you often find more things to collect. I think it was five years of collecting magic lanterns before I began collecting optical toys, a wonderful array of persistence of visions toys from the 19th century with delightful Greek derived endings of trope or scope (meaning viewer), to add a certain educational panache. So you have, for example, Thaumatropes, Phenakistoscopes, Zoetropes, and Praxinoscopes all offering a host of visual delights. It was another five years before I began collecting peepshows and several more years before I became interested in antiquarian books about the things I collect. I wish I were fluent in languages in addition to English because it would make owning books in many other languages a deeper pleasure. 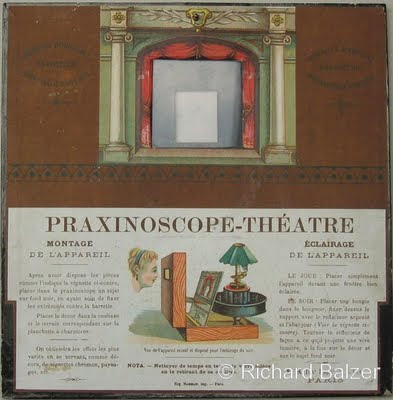 What major institutions are there that have significant collections similar to yours?

Sadly there is no major institution in the US with an extensive collection of the material I am interested in. The Getty Museum in LA has some great pieces and the MOMI (Museum of the Moving Image) in Queens, NY has some material. There are a number of museums with large collections of these materials in Europe. The two most impressive are probably the collections at Cinematheque Francaise in Paris, and the Film Museum in Turin.

Are there other private collectors in your field?

There are many private collectors in my field and each one has a different emphasis. In the US the biggest collector of magic lantern materials is Jack Judson and his collection is exhibited in his museum in San Antonio,Texas. In Europe there are numerous significant collectors. Three with the most spectacular collections are Werner Neke in Mulheim, Germany, Francois Binetruy in Versailles, France and Lester Smith, in London. 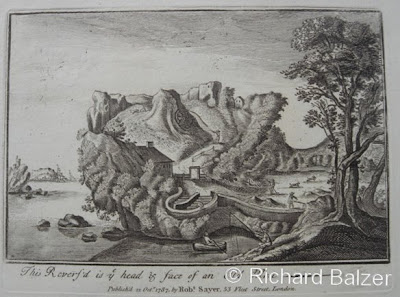 Is there a collectors' group or society related to your collection? 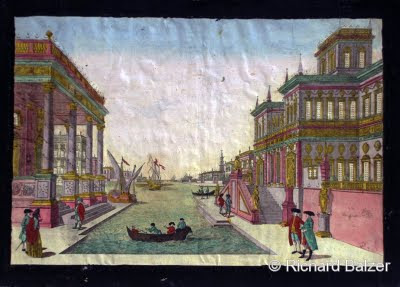 I have written about vue d’optique or perspective prints in this blog. What can you tell us about them?

These prints were primarily meant to entertain and educate. Travel in the 18th and for a good part of the 19th century was quite limited and any person could buy images of the world’s great cities and view them at their leisure at home. One could also educate their children about the wonders of the world with such images. They were very popular and were certainly collected at the time. The vue d’optiques are still readily available. 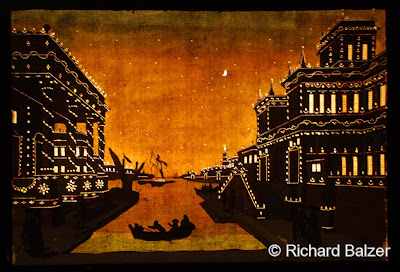 How did the market for these change over time?

Although originally intended as parlour entertainment, these prints were soon taken by showmen and displayed in peepshows in public spaces for a viewing public who would pay “a penny for a peep”. Soon the vue d’optiques were joined by more elaborate prints made specifically for viewing in a peepshow and I am very interested in these. The innovation was to pierce the image either with pin-pricks or cut-outs and to lay down colored paper on the back, so that when light came from the back the image could appear to be the same scene at night, with a star filled sky, lights in windows, silhouetted figures in windows, or fireworks. All this allowed a simple print to be transformed into a day/ night view. The craftsmanship required to make these views was impressive and the views are quite spectacular.

Are there any more recent types of optical objects which are not very valuable now but which might be in the future?

I am sure the answer is yes, but I don’t which ones to suggest. First, I don’t collect 20th century optical objects nor 21st century objects. Secondly, like many collectors, I collect with my heart and have not given much thought to which things would appreciate in value. What I have learned, often from mistakes, is that if you are interested in objects becoming more valuable it is usually a good idea to buy things in really good condition. This has not been a rule I have always followed. I like the items too much and have rarely let condition be the deciding factor in whether or not to buy something. 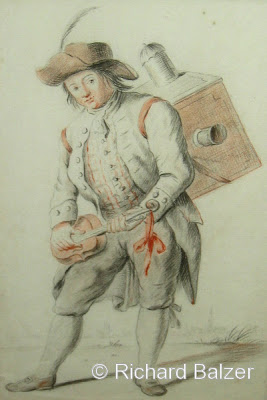 The Richard Balzar Collection is a wonderful collection and the web site is wonderful. As Richard says "Take a look. Perhaps you will see things you have not previously seen, learn something new. If you have more information on an item you see, sharing it will be a gift to me. Enjoy your visit!"
Posted by Chris Lane at 6:00 AM