Last week I described in general terms the notion of recycled prints, where a new print is made from an already existing matrix, the image being modified to some extent. By the middle of the nineteenth century, many of the larger prints were being produced from steel plates, which lasted very well even after thousands of impressions were produced. It was not particularly practical to melt down or totally wipe clean a steel plate, and with the ability of these plates to be reused many times, quite a number of steel plates were kept for years after their first use. Sometimes they were reprinted with little or no change, but other times they would be extensively modified so they could be used for what was a “new” image. One of the most famous examples of this was a print entitled “Union,” which was recycled not just once, but twice. 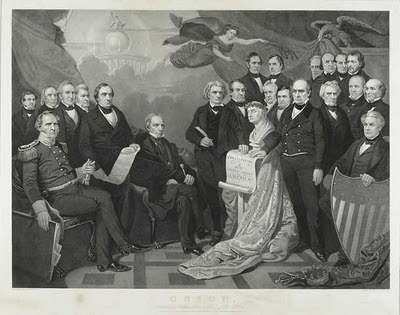 The first use of the “Union” plate was for an 1852 engraving by Henry S. Sadd after a painting by Tomkins Harrison Matteson. This print was issued to commemorate the Compromise of 1850. That political consensus was seen by many as the resolution of the tempest over the contentious issue of free and slave states that had been tearing the country apart. Matteson’s image was a celebration of this compromise which it was hoped would save the Union.

In Matteson’s painting the individuals involved in the compromise are shown seated in a formal setting. The two major protagonists, Daniel Webster and John C. Calhoun, along with “The Great Compromiser,” Henry Clay are most prominent, shown surrounding a bust of Washington, the former two with their hands on a copy of the United States Constitution. Arrayed around them are other important participants in the compromise, including Lewis Cass, Winfield Scott, Sam Houston and Millard Fillmore.

The symbolism of the print is extensive. Liberty blesses the group from above, while in the background the American eagle helps to part curtains to reveal the Utopia that the strengthened Union was seen as now proceeding towards. In the lower right corner Fillmore is shown holding an American shield above the ‘thrown down’ royal crown and scepter, a symbol of America’s struggles of the past. This is a wonderful print celebrating this important agreement in American history. 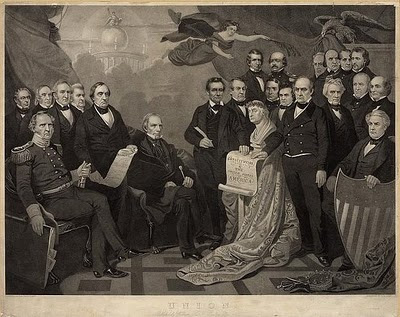 Alas, despite the print’s hopeful prognosis, the Compromise of 1850 was ultimately a failure, for the issue of slavery and its extension to new states continued to fester, leading within a decade to the secession of 11 states and then in April 1861, the fall of Fort Sumter and the beginning of the Civil War. This was followed by a swell of enthusiasm in the North for the Union; a popular wave that print publishers were quick to try to ride. A New York publisher, William Pate, saw the possibilities of Henry Sadd’s engraving after Matteson’s image, so he had it reworked to bring it up-to-date for an 1861 issue of “Union.” 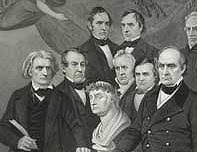 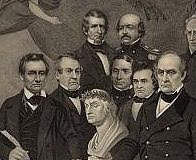 Pate had all the pro-Southern faces rubbed out and pro-Northern visages inserted in their stead. John Bell (Tennessee Senator who ran against Lincoln for President), Howell Cobb (of Georgia), W.P. Magnum (of North Carolina), William R. King (of Alabama), and James Buchanan (the previous President who supported slaveholder rights) were replaced by John Wool (Union general), Edward Everett (the orator being an ardent Union supporter), William H. Seward (Lincoln’s Secretary of State), Benjamin Butler (Union General), and Robert Anderson (“hero” of Fort Sumter), respectively. The most important exchange was the elimination of James Calhoun (the great Southern spokesman) and the insertion of Abraham Lincoln in his place. 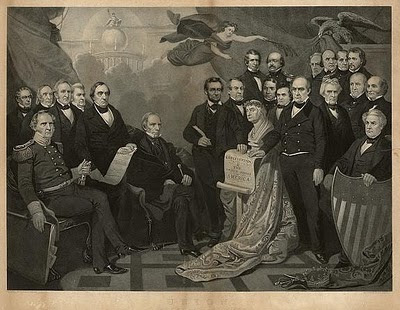 One of the interesting aspects of this print is that Lincoln is shown clean shaven. (cf. blog on Lincoln and the growing of his beard) The print was obviously issued after the fall of Fort Sumter, as evidenced by the inclusion of the Major Anderson, and by that time Lincoln had already grown his beard. It is likely that the engraver of the first recycled print had begun work shortly after Lincoln’s election and that he didn’t have access to a new image of Lincoln with a beard to base his portrait on. So he would have had to use a pre-bearded print as his source. (As an aside, Sadd is listed as the engraver on all versions of this print, though it was unlikely he made the changes to the recycled versions). At some point after the second version of “Union” was published, a third version was made, with a beard added to Lincoln’s face, creating a double-recycled print.
Posted by Chris Lane at 8:00 AM